"We ordinarily see our lives as encounters with things 'out there.'. . .  There's no problem with this process -- unless we believe it. . . . When our world consists of objects, we guide our lives by what we can expect from each object."

We would rather be ruined than changed.
We would rather die in our dread
Than climb the cross of the moment
And let our illusions die.
- W. H. Auden
SCHEDULE 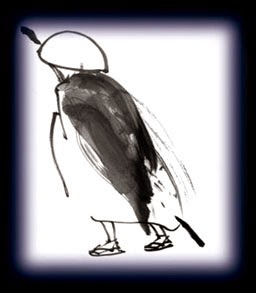 
Whenever Luzu saw a monk coming, he would (immediately) face the wall.
Hearing of this, Nanquan remarked, "I always tell others to receive directly, even before the empty kalpa,
(I usually tell them to realize mastery before the empty aeon,)
(I usually tell my people to realize what has existed before the kalpa of emptiness),
and to realize themselves even before the Buddha came into the world
(to understand before the buddhas appear in the world)
(or to understand what has been before Buddhas appeared in the world).
But still, I haven't found half a man, let alone a whole man
(I haven't acknowledged one disciple or even a half).
If he is thus, he will be stuck in the year of the donkey
(Luzu that way will go on till the year of the ass)."

NOTES: Main translation: Gerry Sisshin Wick. In parentheses: translations from Thomas Cleary and Sato Migaku.
Nanquan (748-835; 9th gen) and Luzu were dharma "brothers" -- both were among Mazu's 13 most noted dharma heirs.
The "empty kalpa" is one of the "four kalpas" or periods of cosmic changes: the empty kalpa, the kalpa of growth (creation), the kalpa of dwelling (existence), the kalpa of decay (destruction).
Since there is no year of the donkey in the Chinese zodiac, the expression "until the year of the donkey" means endlessly.


* * *
The "Koan of the Week" is drawn from these three koan collections.