"True compassion is not just an emotional response but a firm commitment founded on reason."
- Dalai Lama
Saturday Zen Service, Oct 11: 10:00am - 11:45am. 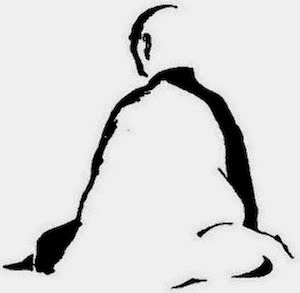 Koan of the Week
Gateless Gate #3: "Judi's One Finger"

Whatever he was asked about Zen, Master Judi simply stuck up his finger.

He had a boy attendant whom a visitor asked, "What kind of teaching does your master give?"

The boy held up one finger too.

Hearing of this, Judi cut off the boy's finger with a knife. As the boy ran away, screaming with pain, Judi called to him. When the boy turned his head, Judi stuck up one finger. The boy was suddenly enlightened.

When Judi was about to die, he said to the assembled monks, "I received this one-finger Zen from Tianlong. I've used it all my life but have not exhausted it." Having said this, he entered nirvana.

The enlightenment of Judi and the boy have nothing to do with the tip of a finger. If you realize this, Tianlong, Judi, the boy, and you yourself are all run through with one skewer.

Old Tianlong made a fool of Judi,
Who cut the boy with a sharp blade.
The mountain deity raised his hand, and lo, without effort,
Great Flower Mountain with its many ridges was split in two!
Posted by Meredith Garmon at 14:14