"You should rather be grateful for the weeds you have in your mind, because eventually they will enrich your practice."
- Shunryu Suzuki
Saturday Zen Service, Feb 28: 10:00am - 11:45am. 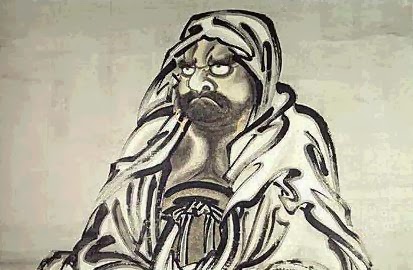 This week's case: Gateless Gate #40, "Kicking Over the Water Jug"

Case:
When Master Guishan was under Baizhang, he had the position of tenzo.
Baizhang wanted to choose a master for Mount Taii.
He called the head monk and the rest of his disciples together to have them present their views and said that the outstanding person should be sent.
Then he took a water jug, put it on the floor, and said, "You may not call this a water jug. What will you call it?"
The head monk said, "It cannot be called a wooden sandal."
Baizhang then asked Guishan.
Guishan immediately kicked over the water jug and left.
Baizhang laughed and said, "First monk, you have been defeated by Guishan."
So he ordered Guishan to found the new monastery.

Wumen's Commentary:
Guishan summoned up all his valor, but, alas, he could not jump out of Baizhang's trap.
Upon examination, he favors the heavy and not the light. But why? Look!
Though he removed his headband, he put on an iron yoke.


Tossing away the bamboo buckets and ladles,
He makes a vigorous thrust and cuts off hindrances;
Baizhang's heavy barrier cannot interrupt his rush,
Countless Buddhas come forth from his toes.


What determines the hero is the water jug;
At the point of minutest distinction, there are no more emotions.
Great peace is originally for the general to bring about,
But the general is not allowed to see great peace.


The great function needs an expert to know;
On the spot, one kick put an end to doubt.
What a pity those who do not succeed in Zen
Do nothing but judge right and wrong at the jug.

Alfred, Lord Tennyson's Verse: (quoted by Nyogen Senzaki, who translates Baizhang's instruction as "Who can say what this is without using its name?")


The water jug is at your feet --
As are wooden sandals, a petulant kick, Buddha-spawning toes.
At your feet, since mind is where you stand.
When the question comes, your feet know the answer.

Posted by Meredith Garmon at 14:53