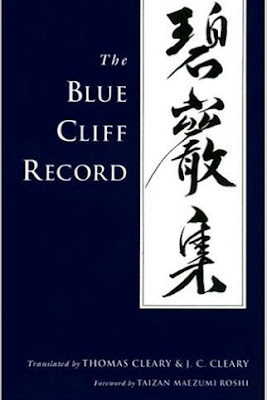 
One string is plucked, and he discerns the whole tune. Such insight is hardly to be met with even in a thousand years. Like a hawk pursuing the hare, he at once demonstrates his superiority. He embodies all the teachings in one phrase, encompasses the thousand great worlds in a single grain of dust. Can any of you go with him, living the same life and dying the same death? Can you testify to the truth by going through and through it yourself? See the case.


Closing the door and sleeping is the way to receive those of highest potential; looking, reflecting, and stretching is a roundabout way for the middling and lesser. How can it bear sitting on the carved wood seat sporting devil eyes? If there is any bystander who doesn't agree, come forward. You can't blame him either.


Yuanwu:
[1] Guest and host both lose. This is not the only instance of indulgence.
[2] One son has intimately understood.
[3] Sad man, do not speak to sad people; if you speak to sad people, you'll sadden them to death. Beating the drum, playing the lute, two masters in harmony.

Loori:
[1] What for? Is there something to be imparted?
[2] Before a word is spoken, he understands.
[3] Ascending and descending in a thousand assemblies. Still, there is only one who got it.


The brilliant ones among the constellation
In the assembled ranks of sages, an adept would know
Know the Lord of Dharma's Law is not like this.
The teaching of the master of teaching isn't like this.
Had Saindhava* been there,
Had there been a fluent interpreter in the group,
Manjusri need not have struck with the gavel.
What need for Manjusri to strike the gavel?

*"Saindhava was a clever retainer who always knew what his master needed and had it ready before he was asked for it."


Do you see the true manner of the primal stage?
The unique breeze of reality -- do you see?
Mother Nature goes on weaving warp and woof,
Continuously creation runs her loom and shuttle,
the woven old brocade contains the images of spring --
Weaving the ancient brocade, incorporating the forms of spring,
nothing can be done about the Spring God's (Manjusri) outflowing.
But nothing can be done about Manjusri's leaking.


While the World Honored One paused, he was confronted by Manjusri, and immediately got down from his seat. It is like the story of Emperor Daizong asking National Teacher Nanyang Huizhong about making a seamless memorial tower [BCR18/BOS85], and also like the story of the outsider asking Buddha, "I do not ask about the spoken or the unspoken" [GG32/BCR65]. Observe the behavior of those transcendent people; when did they ever enter a ghost cave for their subsistence? Some say that the meaning lies in the silence; some say it lies in the pause, that speech illumines what cannot be said, and speechlessness illumines what can be said -- as Yongjia said, "Speaking when silent, silent when speaking." If you can immediately and directly attain fulfillment, then you will no longer see that there is anything ordinary or holy. Everyday you will walk hand in hand with all the Buddhas.


When we behold the profound wellspring of the teaching clearly, Buddha and Manjusri are two mirrors facing each other. The matter of ultimate importance is perceived before it's triggered.


The action of taking the high seat does not mean there is anything to teach; it is inexpressible. Manjusri saw where it was. The teachng of the master of teaching is entirely like this, with nothing whatsoever to explain. The Buddha immediately got down from the seat because if you try to take the advantge, instead you don't get it.


When he was dying, the Buddha said, "In my forty-nine years of teaching I did not preach even one word." This saying embodies all the teachings of his lifetime. "Clearly understand the Lord of Dharma's Law, the Lord of Dharma's Law is like this." This was the formula pronounced at the end of the Buddha's preaching. At the beginning of the preaching the phrase used was "Illustrious disciples assembled here, listen to the first principle of the Dharma." But in this case, Manjusri said the closing words when the Buddha had just ascended the platform and the audience was attentively waiting to hear him speak. By this strange action Manjusri demonstrated that "before a word is spoken, the sermon is already delivered." The Buddha agreed with Manjusri and descended from his seat.


Before he utters anything, everything is finished. When the Buddha is sitting there quietly, that is essential nature itself. For those who have eyes to see, they will understand immediately and say, "The World-Honored One is giving wonderful preaching today!" What else is necessary after this? To say anything else is unnecessary.


What is the difference between striking the gavel and sitting in silence? If you grasp the true world, you realize that each action is the essential world itself. Just sitting. This exhausts it completely. Nothing has to be attached to it. But Manjusri hit the gavel and told the others to look. Some Japanese translations take this as saying, "If you look clearly, you will realize that this is the Dharma-King's Dharma." The other translation is "Look clearly!" I would like to take the latter: "Like this! This is it!" Nothing more.


When you truly understand the Dharma, it's just thus, just this; it's as is. All kinds of words and phrases have been invented in Zen to express thusness or "as-is"-ness, but none are needed. Don't add anything extra. Just let everything be as it is. That's liberation. But letting everything be as is, is difficult for us because we're always trying to fiddle around with things, always adding something, wishing something were taken away. We're always putting another head atop our own. If you're frightened, be frightened, leave it at that and don't add anything extra. What does it mean to let it all be and let it all go? And what about when you can't let it go, what then? Well, if you're holding on, hold on. That's liberation too. Why do you practice Zen? If you think you're going to become something else, you're fooling yourself. If you think that you don't need to practice zazen because everything is perfect as it is, that is an erroneous view.


A single path of spiritual light
from the beginning nothing is hidden.
Subtly communicated without effort --
at once, the spring breeze opens a thousand blossoms.

It's hard to find someone who can guess the tune
the moment the first note is heard.
Let the hawk go when he sees a hare,
the suddenly swiftest is caught.

As for summing all words in a single phrase,
grabbing the universe in just one point,
dead and alive at once the same time --
who can take it?

Climb down from your throne,
Give the next guy a chance.


Cracking open the treasure storehouse
Each jewel shines from within, in between
And all the way through
A thousand faces at Green Dragon Temple.
Clearly observe thus:
Dharma rains down, great earth shivers –
A pair of eyes looks up:
Transgressed just for all of us.

The sound of a mallet
striking a block --
does this split in tow
your hard-fought serenity?
When no one is there
to oberser them
hermit crabs traverse
the bottom of a rock pool.

Each moment, a gavel bang.
Each moment as sharp as that whack.
This is the Dharma of the Dharma-King.
Birthless, deathless, thunderingly silent.