5
Gateless Gate (Mumonkan, Wumenguan) #42
A Woman Comes Out of Samadhi 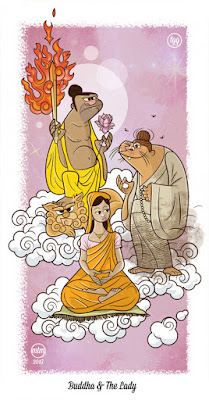 
Once in the ancient days of the World-Honored One, Manjusri went to the place where Buddhas were assembled and found that all the Buddhas were departing for their original dwelling places. Only a young woman remained, sitting in samadhi close to Shakyamuni Buddha's throne. Manjusri asked the Buddha, "Why can that woman be near the Buddha's throne while I cannot?"
The Buddha said, "Just awaken her and raise her up out of samadhi and ask her yourself."
Manjusri walked around the woman three time, snapped his fingers once, took her up to the Brahman heaven, and exerted all his supernatural powers, but he could not bring her out of samadhi.
The World-Honored One said, "Even a hundred or a thousand Manjusris would not be able to bring her out of samadhi. Down below, past twelve hundred million lands as innumerable as the sand of the Ganges, is the Bodhisattva Mômyô [Ensnared Light]. He will be able to arouse her from her samadhi."
Instantly the Bodhisattva Mômyô emerged out of the earth and made a bow to the World-Honored One, who then gave his command. The Bodhisattva went before the woman and snapped his fingers once. At this, the woman came out of samadhi.


Old Shakya plays a country drama on stage, but people of shallow realization cannot appreciate it. Just tell me: Manjusri is the teacher of the Seven Buddhas; why can't he bring the woman out of her samadhi while Mômyô [Ensnared Light], who is a bodhisattva in the beginning stage, can? If you can grasp this completely, you will realize that surging delusive consciousness is nothing other than greatest samadhi.


One can awaken her, the other cannot;
Both have their own freedom. ["Whether or not they can get her out/ She has attained freedom" -Cleary; "Neither was a good actor" -Senzaki]
A god-mask here and a devil-mask there; ["One in a god-mask, the other in a devil-mask" -Sekida; "With a spirit head and a ghost face" -Cleary]
Even in failure, an elegant performance. ["Defeat amounts to elegance" - Cleary; "Had both failed, the drama would still be a comedy" -Senzaki]


Buddha-nature is a natural reality;
Who says there is any other teacher?
Where Ensnared Light snapped his fingers,
When the woman came out of meditation,
Not the slightest effort was expended --
When were thoughts ever stirred?
Living beings are all equal;
They produce many doubts and obstacles by themselves,
in the course of their daily activities.


The woman, Manjusri, and Ensnared Light:
Ultimately how do Zen followers understand?
Only if you harmonize subtly, beyond convention,
Will you believe the waves are basically water.


Taking along Shakyamuni the Tathagatha, Manjusri, and Momyo,
I enjoy the mountain spring
Visiting one truth after another.


Myth is the drama of my life and yours. Each character is myself acting out a part of my nature and interacting with other aspects of myself within my own context. Manjusri is known as the teacher of the Seven Buddhas, who appeared in the dimmest of the remote past, one by one, with immeasurable spaces of time between them. Sakyamuni was the seventh of these august personages, so in this story the Buddha is confronting his own teacher. Take the "young woman" as simply someone you might not expect to be near the Enlightened One, someone deep in zazen and rather stuck there. The other character in this play is the Bodhisattva of Delusive Wisdom, who lives down below, past twelve hundred million lands, at the first level of bodhisattvahood. Delusive Wisdom is very diligent, perhaps, but full of dualistic ideas. Why aren't Buddhas present when Manjusri arrives? They have returned to their original dwelling place. Only a single person remains, sitting near the Buddha's throne. Manjusri can't wake her -- cannot get near the Buddha's seat. But down below lives the Bodhisattva of Delusive Wisdom, many, many levels below us. Instantly the Bodhisattva of Delusive Wisdom appears. He is not way down there below, but is right here, one with us all. How could Delusive Wisdom bring the young woman from her samadhi when Manjusri could not? How could the young woman get near the Buddha when Manjusri could not? Where had all the Buddhas gone when Manjusri appeared? Cut one, cut all!


Manjusri is unable to get her out of that state because it is none other than his own domain (ineffable knowledge of the absolute) in which she is absorbed. What the individual in this state needs is complementary experience and knowledge. The complement to nirvanic absorption in absolute truth is discerning knowledge of relative truth, represented in this koan by the bodhisattva Ensnared Light, the symbol of consciousness and knowledge of the apparent world. The Way of Buddhahood is lived through the harmonious combination of two fundamental qualities: formless insight into absolute truth and discerning cognition of relative truth. True adepts can experience nirvana and samsara simultaneously, yet demonstrate or emphasize one or the other expediently for the sake of edifying others. The "waves" of knowledge of differentiation are not separated from the "water" of the oceanic consciousness of unity.


What is it about Manjusri that makes all the Buddhas return to their original home? What, in any case, is the original home of Buddha? "Going home" is a down-to-earth and free-of-mystique expression for awakening. Wielding the sword of prajna, Manjusri cuts through the illusion of separation, and discrimination. With samadhi the illusion of being a separate individual drops away. In samadhi the woman was neither near to nor far from Buddha because Buddha too had "gone home." Momyo was as far as it is possible to be from Buddha. Yet one so distant could do what Majusri was unable to do. Momyo is the principle of identity (everything is itself and cannot at the same time be something else), in the same way that Manjusri is the principle of nondifferentiation. Without Momyo, nothing would be accomplished, whereas without Manjusri, everything would fall to pieces.


The Buddhas assembled and consulted about how to make unenlightened beings enter the Supreme Way and achieve Holy Buddhahood. The girl represents your mind, and now she is sitting in samadhi. The Buddha's throne symbolizes the center of samadhi. The girl's samadhi is hers alone. Even Manjusri cannot see into it, much less get near it. Shakyamuni asks the impossible, to prove it is impossible. Manjusri exercised miraculous powers and performed superhuman feats, but in vain. No one can arouse the girl from absolute samadhi except the girl herself. One's absolute samadhi goes deep down below the twelve hundred million lands of the mind's realm. When Momyo, a Bodhisattva at the beginner's stage, wants to return to the level of the ordinary activity of consciousness, he can do so in an instant. The girl is the counterpart of Momyo.


According to a sutra, the assembly was held in the land of another buddha. Buddha Shakyamuni went there, and his disciple, Manjusri, followed him. Manjusri was not allowed to enter the hall, as he had not enough compassion to balance his wisdom. He tried his best to accomplish his virtue, and went back there again. One comes out from deep meditation to save all sentient beings. One moves with sympathy and grief for the delusions of other beings, and wishes to save them from their endless suffering. This koan simply emphasizes the noble power of compassion, which must go hand in hand with great wisdom. True buddhahood must have a balance of spotless wisdom and colorless compassion.


The particular aim of this koan is to make the monks' Zen eye thoroughly clear regarding fundamental wisdom versus attained wisdom, philosophical teaching versus Zen experience, or equality versus differentiation. When Manjusri arrived why did all the other Buddhas disappear and return to their original dwelling places? What are the Buddhas' original dwelling places? Why can a defiled woman be close to the Buddha seat? Why is Manjusri, the teacher of the Seven Buddhas, unable to come close to the Buddha seat? Why is Manjusri unable to awaken the woman from her meditation? How could Momyo, a Bodhisattva of just the initial stage, so easily accomplish what was impossible for Manjusri? Manjusri symbolizes Fundamental Wisdom, that is, Absolute Wisdom: the One Truth to which everything returns and from which everything is born. The live Manjusri pervades the universe. How wonderful it is that he could not bring the woman out of her meditation! Momyo is a Bodhisattva of differentiation wisdom, one who goes about clarifying truths and phenomena in accordance with the teachings of differentiation. Where the differentiation wisdom shines, each and every thing, as it is, is the entrance to emancipation. When right and wrong or life and death no longer disturb one at all, he has truly transcended right and wrong, he is free from life and death. If equality is stuck at equality, it ceases to be true equality. If differentiation is stuck at differentiation, it is no longer true differentiation. Equality is the basis of differentiation; differentiation is the working which is dynamically developed from, but firmly based on, equality, Oneness. When this is realized, both equality and differentiation shine out with real life; then you may truly declare that "this busy life of ignorance and discrimination is the life of supreme satori."


Manjusri is a symbol of Prajna, the wisdom of the essential world (also called the world of complete emptiness or the world of absolute equality). This world is nothing other than what is realized in the enlightenment of all Buddhas. In Manjusri's world there is neither subject nor object, neither standing up nor sitting down, neither getting in nor getting out. Momyo is the symbol of the world of absolute difference. In his world, we can freely stand up or sit down, get in or out, and so on. Everything is the world has two aspects, one essential and the other phenomenal. In the former, everything is empty. It has no form, no color, no weight, no height. From this aspect, therefore, everything is equal. In the latter, everything is the only thing in the whole universe having color, weight, and height. From this aspect all things are completely different. The most important point is that these two aspects are intrinsically one. For the sake of expediency, we explain them as two, but from the beginning they are one. Manjusri was free not to awaken her; Momyo was free to wake her. For a horse, it is freedom to gallop; for a snake, it is freedom to crawl, not gallop. We are always in the center of perfect freedom.


Buddhas gather so they can return to their original dwelling.
They return so they can gather again at the next Buddha party.
She, unnamed and untitled,
Her light and its snares one,
Surpasses their backing and forthing.