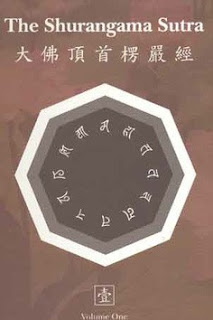 
The Śūraṅgama ("Indestructible") Sūtra is a Mahayana Buddhist sutra, probably of Chinese origin and probably written in the late 7th-century (though it purports to come from India and much earlier). Though frequently regarded as Buddhist apocrypha, the Surangama Sutra has been especially influential in Chan Buddhism.


To have seeing and unseeing is to light a torch at midday. To have no seeing and no unseeing, is to pour out black ink at midnight. If you believe that seeing and hearing are like the phantom's shadow, you will know that sounds and colors are like flowers in the sky. Tell me: Is there any sutra teaching at all that we Zen students may talk about?


Entire the figure of an elephant,
Complete the image of an ox;
To have seen is a defect of the eyes.
The whole elephant and the whole ox blind no differently.
The wisest have groped in the dark,
All along adepts have been naming and describing.
Do you want to see the golden-headed Buddha?
If you want to see the Buddha right now,
Through countless eons, none is more than halfway there.
Every atom of every land is halfway there.


The great ocean utterly dried;
The ocean dries up,
vast space completely filled;
Space is filled:
Zen monks with long noses;
A patchrobe monk's nose is long,
old Buddhas with short tongues.
The ancient Buddha's tongue is short.
The silken thread passes nine curves;
The thread of the jewel passes nine bends,
the jeweled loom barely rotates once.
The jade loom barely turns once.
Instantly meeting together, who recognizes him?
Meeting directly, who knows him?
Finally, you'll believe this man who's unaccompanied.
For the first time you believe this person cannot be accompanied.


The ancients said that when you get here, you can only know for yourself; you can't explain to others. If you say you acknowledge sight as an existent thing, you are not yet able to wipe away the traces. "When I don't see" is like the antelope with his horns hung up -- all echo of sound, traces of tracks, all breath is utterly gone; where will you turn to search for him? The sense of the scripture is total indulgence in the beginning and total restraint in the end.


The eye of this recitial by Xuedou, and its function as a koan, is in this one statement alone: "How could it not be you?" The point is that of all the myriad things, none is not you. You are you, I am I. One can only know oneself.


When we don’t see, why can’t we see our not-seeing? -- This passage takes up the matter of “not-seeing” and asks us why we can’t realize the matter of not-seeing when we cannot see (for example, when our eyes our closed). Although it speaks here about not-seeing, I feel the same could be said about when we do see. In other words: “When we do see, why can’t we see our seeing?” The true world is always one. Once a division into two is made, it is already the phenomenal world. But most people remain unaware of the world of oneness. They might be able to believe that such a world is possible by thinking about it philosophically. But the only way to really experience it is to practice zazen and realize your true nature. “When we don’t see.” This not seeing is one. Why don’t you see that? If we are able to see, it is because there are two things. If it is truly one, there can be no seeing. If there are two things it is the world of phenomena. The essential world is always one.
If we see our not-seeing, that is, of course, not the true aspect of not-seeing. -- In other words, if we believe we have seen where there is actually no seeing, this is not true not-seeing. For not-seeing means there is nothing that can be seen. To repeat, the only way is to experience it directly in satori.
If we don’t see our not-seeing, then there is naturally not a thing. How can it not be yourself? -- If we say that we cannot see the fact of notseeing, we must realize that not-seeing has nothing to do with things or matter. For, to be sure, whenever there is matter it can be seen. Where there is not-seeing, there is no matter of the objective world. How could it not be yourself? In other words, that’s you! How could it not be you? This is the white ox on the bare ground, this is the true self. It is the world that is always one.


When I don't see, why don’t you see that I don’t see? If you say that you ‘see’ that I don’t see, that is naturally not the way how I don’t see. -- These are the words of Shakyamuni Buddha to Ananda. No matter how you try to see it, you cannot see anything. Why is that? Even if you say you have seen what is not seeing, the form of that not-seeing cannot be seen by people. If you say you have seen notseeing, it is not the real thing.
If you don’t see what I don’t see, it is naturally not a[n objective] thing. -- If you don’t see the actual essence of not-seeing, that is naturally not some thing. For it it were a thing, you could see it. Not-seeing cannot be seen.
Why isn’t it your [own] self? -- In other words, that not-seeing is you yourself. The seer and the seen have become one. Usually we assume there is a division between seer and seen, between subject and object. But actually the one speaking and the one being spoken to are one. You could say that the one speaking is completely absorbed in the one being spoken to. You yourself disappear. Then it is one.


Invisible Sight
None of you left sees the words before sound.
When I can't see, why don't you see my not seeing?
It's not a thing, and it's nothing but you.
My sight, invisible,
guarded like a vanishing wall.
When you reach it, you cannot explain,
or even find the way on a map:
total indulgence at the start of the journey,
total restraint in the end.
Like an antelope grabbed by the horns,
feel the edge of the wall --
Its end could be anywhere, at any time.
Every atom in every place,
lies already halfway there.


Replace "not seeing with "not knowing":
"When I maintain the mind of not-knowing, why don't I know the not-knowing place?" If you know it then it's not not-knowing.
"If you don't know my not-knowing ground, then naturally it's not a thing." If it were a thing then it would have properties that you could know.
"Why isn't it that you are not not-knowing?" If the two negatives make a positive, this line could read: "Why is it that are not-knowing?" or from the original "Why is it that you are?" If you are not a thing, what are you, and how can you even exist? When you penetrate the koan, "Who am I?" you will know the answer.
What this koan is essentially asking is, if you realize that state of seeing as not-seeing, what is that? Is that your true self? How can you say that it's not your true self? Why isn't it that you are not?
The text is saying: "You're not a thing, but then if you're not a thing, what are you?"
The Surangama Sutra also tells us that conceptual knowledge and opinions are the root of ignorance. When conceptual knowledge and points of view are forgotten, wherever you are is nirvana. When we maintain the mind of not-knowing, nirvana is everywhere.


The Surangama's Not Seeing
Seeing the distant jewel mountains through a clear window,
the window is not seen;
as an ant crawls across the window carrying a thread,
now the window is seen.
Meanwhile the ant is passing the thread through a hole
of many bends in the one bright jewel,
thinking only of the sweet taste of honey

At the end of the peninsula
an aboriginal boy
nicknamed "Midnight"
had from the European children
among the sand dunes.
For years no one remembered him
out there with the spinifex
and the cries of gulls.

When the beloved's smile lights up your world, you don't see it.
Isn't it just you, through and through: smile, light, beloved?
Later, groping for the memory, you believe you saw it,
And the world dims. Also you.