1
Book of Serenity (Shoyoroku, Congrong Lu) #67
The Wisdom in the Flower Garland Sutra 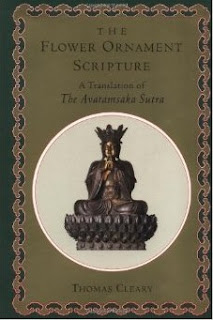 
The Avataṃsaka (Flower Garland or Flower Ornament) Sutra is one of the most influential Mahayana sutras of East Asian Buddhism. It is among the longest in the Buddhist canon, contains 40 chapters on a variety of topics. Overarching themes include the interdependency of all phenomena (dharmas), and the progression of the Buddhist path to full Enlightenment. The Sutra describes a cosmos of infinite realms upon realms, mutually containing one another. The Avataṃsaka Sutra was written in stages, beginning from at least 500 years after the death of the Buddha. The material from different stages and originally independent scriptures were all combined, probably in Central Asia, in the late third or the fourth century CE. (adapted from Wikipedia)


One speck of dust contains myriad phenomena,
One thought embraces the threefold-thousand [Worlds][1]
Then, how about a strong person who sustains the heaven and stands upon the earth,
Or a wise and sharp fellow who understands the tail when the head is mentioned?
Isn’t that person turning his back against his own spirit and burying away the family
treasure?


In the Avatamsaka Sutra, Shakyamuni Buddha says:[2]
"As I now see all sentient beings everywhere, they're endowed with the Tathagata's wisdom and virtue.[3]
But because of deluded thoughts and attachments, they do not realize it."[4]

[2]The Kegon Sutra says, (Sato); The Flower Ornament Scripture says, (Cleary).
[3]“Now I see all living beings everywhere, and I see that each of them possesses the wisdom and virtue of Tathagata. (Sato); "I now see all sentient beings everywhere fully posses the wisdom and virtues of the enlightened ones, (Cleary).
[4]But because of their delusions and attachments, they cannot realize it” (Sato); but because of false conceptions and attachments they do not realize it" (Cleary).


[3]A bear turns a somersault, a donkey does a tribal dance.
[4]False conceptions and attachments aren't bad, either.


Covered like heaven, supportive like earth;[5]
making a ball, forming a mass;[6]
suffusing the Dharma realm: it's boundless.[7]
Crushing the tiniest motes, it lacks an interior,[8]
penetrating utterly the subtlest point.[9]
Who can distinguish the pro and con?[10]
Buddhist Ancestors come to repay their debt of karmic words.[11]
Ask Old teacher Wang of Nanquan and see.[12]
Every person eats but a single vegetable leaf.[13]

[5]Sky covers, earth bears, (Cleary); Like heaven it [i.e., the wisdom and virtue of Tathagata] covers, like earth it sustains; (Sato).
[6]Making a mass, making a clump. (Cleary); It makes lumps, it forms masses. (Sato).
[7]Pervading the universe, without bound, (Cleary); It prevails in the dharma world [i.e., the whole universe] without having any boundary; (Sato).
[8]Breaking down subatomic particles, with no inside. (Cleary); It shatters the smallest particle [literally: "next to zero"] without having anything inside. (Sato).
[9]Getting to the end of the mysterious subtlety. (Cleary); All mysterious subtleties being exhausted, (Sato).
[10]Who distinguishes turning towards and away? (Cleary); Who could divide between going for and going against? (Sato).
[11]Buddhas and patriarchs come to pay the debt for what they said. (Cleary); Buddhas and Ancestors come and expiate for the karmic wrong they have said. (Sato).
[12]Ask old teacher Wang of Nanquan (Cleary); Ask the Old Teacher Wang [Master Nanquan’s real name (one of the most common names)] of Nanquan: (Sato).
[13]Each person just eats one stalk of vegetable. (Cleary); Each and every person just eats a piece of vegetable. [Behind this line there is a dialogue between Nanquan and Shashan (both were Mazu’s disciples): One day Nanquan showed a piece of vegetable and said, “This vegetable is so good, it should be offered to all people to eat.” Thereupon Shashan said, “I don’t need not only that vegetable, but also any other kinds of nice food at all.” Then Nansen said, “That’s great. But only after eating it could you really know how it tastes.”] (Sato).


Shakyamuni Buddha saw the morning star and was enlightened, and he said, “I and the great earth and beings simultaneously achieve the Way.”


Flower Garland Sutra continues, "If they give up false conceptions, then omniscience, spontaneous knowledge, and unhindered wisdom can become manifest." Then it cites the metaphor of an atom containing a scripture as extensive as the universe, saying, "Transcending thought to see Buddha, breaking down an atom to produce a scripture." It also says, "Then the Buddha observed all the beings of the cosmos with his pure unobstructed eye of wisdom and said, 'How wonderful! How is it that these beings all have the wisdom of the enlightened ones, yet in their folly and delusion do not know or see it? I should teach them the right path to make them abandon illusion and attachment forever, so that they can perceive the vast wisdom of the enlightened ones within their own bodies and be no different from the Buddhas.'"


Sentient beings contain natural virtues as their substance and have the ocean of knowledge as their source: but when forms change, the body differs; when feelings arise, knowledge is blocked. Now to bring about knowledge of mind and unity with the substance, arrival at the source and forgetting of feelings, I discuss this scripture. It is like a man with appearance befitting one full of virtue and wisdom who sees himself as poor, sick, and suffering in a dream -- this is the 'change of form' -- he doesn't see his original body -- this is the 'differing of the body.' He takes it to be his own body -- this is 'feelings arise'; he does not believe his own body is handsome and blessed with good qualities -- this is 'knowledge is blocked.'"


A monk asked Baoci, "'When feelings arise, knowledge is blocked; when forms change, the body differs' -- how is it before feelings arise?
Baoci said, "Blocked."


Since it fills the cosmos, making a single entity, is there indeed a mysterious subtlety apart from and beyond the dust of the turmoil? Is there indeed any before and behind, turning toward or turning away? Even if buddhas do not appear in the world, this doesn't cause any lessening; even when buddhas appear in the world, explaining and illustrating, this doesn't cause any increase.


All beings -- including you! -- are endowed with the Tathagata's wisdom as part of their birthright. But if you don't realize it, then it doesn't really have any significance for you.
Our deluded thoughts and our attachments blind us to our True Nature. A deluded thought is any thought that creates a gap between ourselves and others or other things -- or between ourselves and ourselves. As long as you believe that there's a separate self, you won't clearly see. It's very difficult to let go of it because it takes courage to let go of that notion of self. We spend all our energies trying to protect or aggrandize the self, or to pity it. If you can just let go of your attachments to your ideas about who you are, then all phenomena, the ten-thousand dharmas, will reveal your enlightenment, your wisdom. You are the Buddha, let it shine through.


Each thing in the phenomenal world (for example, a finger) appears in the phenomenal world. At the same time, however, it has the essence of being zero and infinite. This is what is meant by “the wisdom and virtue of Tathagata.” Its essence is zero and infinite. “Zero” means it cannot be grasped by our senses. It cannot be caught in the net of our perception. Recently, while leading a sesshin, the attendant brought fruit and other things to my room. When I got up in the morning, I found ants all over the fruit. That’s certainly a case of the wisdom and virtue of the Tathagatha! And when I clapped my hands, those little creatures scurried away. That, too, is a case of the wisdom of the Tathagatha. In their scurrying is inherent limitless wisdom. The other day when I went to the toilet in my house, I found a centipede that had fallen into the toilet and, despite his many legs, was unable to crawl out again. That, too, is a case of the wisdom and virtue of the Tathagatha. I picked it up with a pair of chopsticks and put it in the garden. All living beings are endowed with exactly the same wisdom and virtue as the Buddha, which is complete and lacking in nothing. We are all perfect, absolute and limitless existences lacking nothing. But our conceptual minds prevent us from realizing that. The root of those thoughts is dualistic opposition between subject and object, although there is intrinsically no such standoff. Usually we only see the dualistic world of phenomena. Actually, however, it is one. The "delusions and attachments” come from this illusion of a dualistic standoff.


The Flower Ornament Scripture's "Wisdom"
Wisdom and virtues are all-pervading, every single soul fully endowed.
Opening up the nature’s source, old Zhaozhou has never been mystified.
But blocked resolutely by false notions and attachments,
How amazing that confused folks can’t just get up and dance,
And wallowing in sorrow, don’t dare behold their eyeballs.
Thus noble caring Buddhas are moved to melodious talk,
Sharing inner dignity, kindness deep inside the upright rock,
Let everyone know, just chew threw and swallow your vegetable stalk.


Along the retaining wall
each stone gives its warmth
back to the sunlight.
Nothing can go wrong today --
absolutely nothing!
A blackbird
feels the worms move
beneath its feet.


Gotama, privilege-born, home-leaver, family-abandoner
Perceived a line, and himself on the bad side:
Not enlightened nor awake, knowing neither truth nor peace,
Possessing neither wisdom nor virtue.
When the morning star saw Gotama,
The illusion of that line lifted.
Each being "possesses the wisdom and virtue of Tathagata,"
He said, "All achieve the way together."
Then Gotama perceived another line,
And himself on the good side.
On the other side:
Beings, because of delusions and attachments,
Not realizing, knowing, seeing their own wisdom, virtue, enlightenment.
"I should teach them," he said.
Suppose next the evening star had seen Gotama,
Had lifted the illusion of his new line.
Doesn't every lifting of an illusory line
Draw another illusory line:
Between the illusion and its lifting?

The path leads nowhere.
I walk it.
Gotama has nothing to teach.
I study.
There is no practice, and I practice.
The lines come and go and come again
And go again.