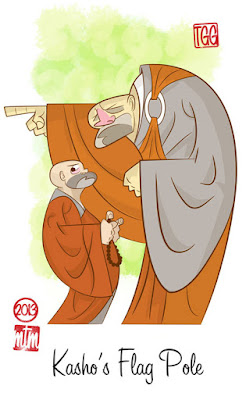 Case
Ananda asked Kashyapa in all earnestness, "The world-Honored One transmitted the brocade robe to you. What else did he transmit to you?"
Kashyapa called, "Ananda!"
Ananda replied, "Yes, Master."
Kashyapa said, "Knock down the flagpole at the gate."

Wumen's Comment
If you can give a turning word befitting this, you will see that the meeting at Mount Grdhrakûta is definitely still in session. If not, it is because Vipashyin Buddha has keeping something in mind from the remotest times, and even now he still cannot attain the mystery.

Verse
The answer is more familiar than the question;
How many discuss this with glaring eyes!
Elder brother calls, younger brother answers - the family disgrace!
Here is the spring that belongs to neither yin nor yang.

Daido's Comment
Although Ananda is a wellspring of the Buddha's teachings, he has not attained the adamantine wisdom. When his ripeness finally manifests, he wants to know if anything else besides the brocade robe was transmitted on Mount Gridhrakuta.
Kashyapa, seeing that the critical stage has been reached, calls, "Ananda!" However, we should understand that although he calls out like this, he is not calling Ananda, nor is the response an answer to his call. All of this notwithstanding, although the message is sent, it does not reach home. Seeing this, Kashyapa pushes against the edges and ultimately walks into Ananda's belly, saying, "Take down the flagpole at the front gate." At that moment the Budddha's robe enters Ananda's skull. Not only is the flagpole taken down, but so is Kashyapa, as well as the mountains, rivers, and the great earth itself.

Daido's Verse
Dragon sons and daughters are always born of dragon parents --
But how can it be explained?
The rains have passed,
And the autumn river runs deep and fast.

NEXT CASE
KOAN INDEX
Posted by Meredith Garmon at 16:59