8
Blue Cliff Record (Hekiganroku, Biyan Lu) #84
Book of Serenity (Shoyoroku, Congrong Lu) #48
Vimalakirti's "The Gate to the One and Only" 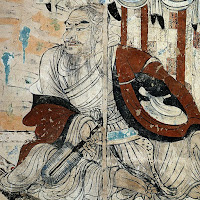 
Vimalakīrti is the central figure in the Vimalakirti Sutra, which presents him as the ideal Mahayana Buddhist lay practitioner and a contemporary of Shakyamuni Buddha (480-400 BCE). Vimalakīrti is characterized as a wealthy patron of Buddha. Mañjuśrī is the bodhisattva of prajñā (transcendent wisdom). He is the oldest and most significant bodhisattva in Mahāyāna literature.


There is nothing right that can truly be called right. There is no wrong that can truly be called wrong. With right and wrong eliminated, gains and losses are forgotten. It is all naked and exposed. Now I want to ask you, what is in front of me and what is behind me? Some monk may come forward and say that in front there are the Buddha hall and the temple gate, and behind, the bedroom and the sitting room. Tell me, is that man open-eyed? If you can see through him, I will acknowledge that you have seen the ancient worthy.


Marvelous activity may be limitless, but there is a place where the hand cannot reach. Speech may be unimpeded, but there's a time when the mouth can't be open. As Longya [Ryuge] was a handless man who used his fist, so Jiashan [Kassan], a tongueless man, used words to cause understanding. To liberate the body when halfway down the road: Who is such a person?


You foolish old Vimalakirti,
Sorrowful for sentient beings,
You lie sick in Vaisali,
Your body all withered up.
The teacher of the Seven Buddhas [Manjusri] comes,
The room is cleared of everything,
You ask for the Gate to the One and Only;
Are you repulsed by Manjusri's words?
No, not repulsed; the golden-haired lion
Can find you nowhere.


Manjusri inquires after the illness of the old Vaisalian;
Manjusri's sick call to old Vaisali.
The gate of nonduality opens -- Behold the adept.
The nondual gate opens. Look at the adept.
Crude without, pure within -- who appreciates it?
Rough outside, genuine inside -- who appreciates him?
Forgetting 'before' and losing 'after', don't sigh.
Forgetting before and losing after, don't lament.
Strugggling to present the gem -- the man with his feet cut off in the garden of Chu;
Trying hard to offer a stone, the offender was punished at So's palace.
Repaying with a jewel, shining bright -- the cut snake of Sui.
In recompense, the luminous jewel: the wounded snake at Zui's castle.
Stop checking --
There are absolutely no flaws;
Stop inquiring! It's beyond flaws.
Mundanity totally gone, that's still bue a little.
Totally lacking worldliness -- that's worth a little.

There is nothing that "is" can affirm.
There is nothing that "not" can negate.
Free the yes from the no, strip yourself bare.
Cast all away, be completely exposed.
This state is what you must learn to trust.
What's he say?
he can fool you
What's he say?
He's withered and dying, but he returns to a single room that is always swept clean.
It stands in a house
by duality's gate.
It guards the gap between something and nothing.
Search long without finding,
Nowhere else to look.
Even if the whole world -- mountains, rivers, oceans, lakes,
grasses, flowers, roots, and trees -- were turned into
a single gold lion,
you still wouldn't see it in front of your nose.


The old temple bell
absorbs the heat
of a summer's afternoon.
Its bell-beam has become
a resting place
for dragonflies.
The valley below is at peace.
Each stone contains a stone.


Watch them play, Manjusri and Vimalakirti.
See the one's chatter enact the other's silence.
The one's silence enact the other's chatter.
Watch them play, Xuedou and Hongzhi,
Recapitulating the ancients.
All the words there ever were are contained in your silence.
The vast and void silence is contained in your every word.
How then will you speak? How remain silent?
How enter the gate of Not-Two?