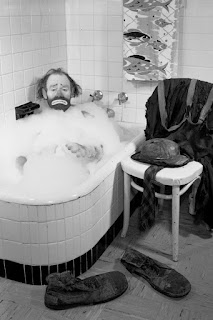 
In ancient times, there were sixteen Bodhisattvas.[1]
At the monks' bath-time, following the rule, they had baths.[2]
They suddenly experienced realization through the touch of the water.[3]
You reverend Zen students, do you understand their words?
"We experienced the subtle and clear touch,[4]
have attained Buddhahood, and still retain it."[5]
You will be able to attain this condition after seven times piercing and eight times breaking through.[6]

[3] Or: "suddenly realized the basis of water" (Cleary); "At once they realized the cause of water" (Sato); "what had first seemed mere water suddenly seemed to them a revelation of real purity" (R.D.M. Shaw).
[4-5] Or: "Subtle feeling reveals illumination, perfecting the abode of offspring of Buddha" (Cleary); "Wonderful feeling! Perfectly clear! We have attained the abode of the children of Buddha" (Sato); "They felt as if they had entered heaven itself and were filled with high spirits" (R.D.M. Shaw).


[1] What's the use of forming a crowd? This bunch of idiots!
[2] They've collided with the pillar. Why such lacquer tubs?
[3] Suddenly their heads are soaked with foul water.
[4] It's no longer anyone else's business. How will you understand them? "Having knocked it down, it's nothing else."
[5] Here the world's patchrobed monks seek but cannot find. Why two heads, three faces?
[6] One blow with the staff, one welt. Better not turn your back on me! You're colliding with it, you're bumping into it. Have you ever seen Deshan and Linji?


The enlightened man is master of one single thing,
It takes one Zennist who's finished the work,
Stretches at ease on his bed.
Stretching out on the bench and lying down.
If, in a dream, the ancients said they were enlightened,
In a dream there's been talk of realizing complete communion;
Let them emerge from the scented water, and I would spit at them!
Having washed with fragrant water, a spit right in the face.


The Main Subject is a short paraphrase or excerpt from a late Indian Scripture, known in Japanese as the Sura-gon Kyo. In this Scripture a man called Bhadrapala and fifteen of his companions, all Indians, are said to have entered the temple bath (a large square tank) at the usual time. As soon as they got into the water they one and all claimed to have attained to full Enlightenment by perceiving the mystic beauty of the water. The Bhadrapala here mentioned is said to have at first despised and slighted the Buddha, though afterwards he was converted. The title given to these sixteen men, Kaishi, is not the ordinary one for Bodhisattvas. It means the "Opened Ones," i.e. men who have very great minds. They do, however, rank as Bodhisattvas.


In the Surangama Sutra there is an episode in which twenty-five Bohisattvas relate their experiences of attaining realization.
First, Kyochinnyo and four others (the first five disciples of the Buddha) stand up and describe their paths to realization. Kyochinnyo says, "As for my realization, seeing a sight was the primary cause of it."
Second, Kyogon Doji says, "Smelling a scent was the cause of my realization."
Third, Yakuo and Yakujo cite tasting as the cause of their realization.
Fourth, Baddabara and the fifteen other Bodhisattvas of the present case rise and make obeisance to the Buddha, and Baddabara says, "We formerly heard the preaching of Iono and became monks. At the monks' bathtime, following the rule, we entered the bathroom. We suddently experienced realization through the touch of the water. We did not wash off dirt, did not wash the body. We achieved peace of mind and obtained the state of no-possession. Iono named me Baddabara, saying 'You have experienced subtle and clear touching, and attained Budddhahood, and retain it.' The answer to your question, therefore, is that touching was the primary cause of our realization."
Other Bodhisattvas in turn tell of their experiences, and finally the Bodhisattva Avalokiesvara cites the importance, in his case, of "listening to sound."


Water and self, self and water. Water is as a seed; mortals and buddhas, wrong and right, are all as one. The so-called basis of water refers to the data of feeling; because of the water there is feeling, so it is called the basis of water. It is also called the basis of water because the use of water is the basis of washing the body. Manifestation comes from the conjunction of feeler and felt. When you focus on this observation until the feeling of data has ended, subtle feeling appears and you attain acceptance of nonorigination.


If you understand this directly, then going to bed, getting up, and so on is all subtle feeling revealing illumination. What about it? What ground is that under your behind? Is it the ground of ordinary mortals? Is it the ground of Buddhas? Or is it borrowed ground? This realm of subtle feeling cannot be realized by a warm pat of the hand; you have to reduce your boned to powerder and shatter your body to smithereens to master it. If you don't go all the way, you can't get it.


The Basis of Water

One day they awoke to the basis of water.
Suddenly soaked, crashing down walls.
The absence of anything that does not flow
subtly leads to illumination.

It's just like remembering a dream in a dream!
A slap in the face, so sleepers awake,
like layers of sediment splashed upon mud;
the lines in the rocks, the hues in the canyon below.


Preparing to enter the shower
I vow with all beings
To wash off the last residue
Of thoughts about being pure.

Preparing to enter the shower
I vow with all beings
To cleanse this body of Buddha
And go naked into the world.

Right down
"full fathoms five"
a deep joy resides
with crustaceans
and anemones
and rocks collected
from early childhood.

On the bath-mat
a wet footprint
slowly evaporates.


Just find fifteen intimate friends,
And follow the rule.
The water takes care of everything.
Nothing to pierce. Nothing to break through.