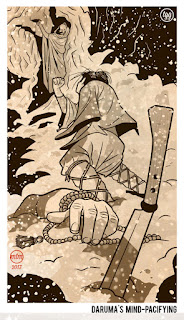 Case
Bodhidarma sat facing the wall.
The second patriarch [Shenguang, later called Huike], standing in the snow, cut off his arm and said, "Your disciple's mind is not yet at peace. I beg you, Master, give it rest."
Bodhidharma said, "Bring your mind to me; I will put it to rest."
The patriarch said, "I have searched for the mind but have never been able to find it."
Bodhidharma said, "I have finished putting it to rest for you."

Bodhidharma's Verse
Outside, cut off all relations.
Inside, have no panting in your mind.
Make your mind like a wall,
And thus you may attain Dao.

Nyogen Senzaki's Commentary
The silent master was cautious enough to try the sincerity of the newcomer before admitting him. Shenguang was not allowed to enter the temple, and had to stand in the courtyard, deep with snow. His firm resolution and earnest wish kept him standing continually in one spot until dawn, beads of frozen teardrops on his breast. At last, with a sharp knife he cut off his left arm and presented it, showing his resolution to follow the master even at the risk of his life. Thereupon, Bodhidharma admitted him into the order as a disciple, fully qualified to be instructed in the teaching of Zen. A new name was given to the disciple by the master. It was Huike, which is pronounced Eka by the Japanese. Bodhidharma had a few other disciples, but Huike was the one who received the bowl and the robe from him, becoming the second patriarch of Chinese Zen.

The moment we think we have taken hold of a thought, it is no more with us. So with the idea of a soul, or an ego, or a being, or a person, there is no such particular entity objectively to be so distinguished, and which remains as such eternally separated from the subject who so thinks. This ungraspability of a mind or thought, which is tantamount to saying that there is no soul-substance as a solitary, unrelated 'thing' in the recesses of consciousness, is one of the basic doctrines of Buddhism. Huike was brave enough to cut of his left arm, but he did not have the nerve to use the knife upon his own mind and thought. Bodhidharma was like a good surgeon, who uses his knife as quick as a flash. The operation was finished before the nurse could give any anesthetic to the patient. Who was sick? What was the trouble? It was merely illusory; unreal. Your mind is already pacified.

Wumen's Commentary
The broken-toothed old barbarian came thousands of miles across the sea with an active spirit.
It can rightly be said that he raised waves where there was no wind.
In later life he obtained one disciple, but even he was crippled in his six senses.
Ha! The fools do not even know four characters.

Sekida's Notes
"My mind has no peace." Only when he has emptied himself has he peace of mind.
"I beg you." There is no point in begging for one's peace of mind, but one cannot help doing it all the same.
"Please pacify my mind." You cannot pacify your mind while you are asking others to do it for you.
"Bring your mind here." You cannot find your mind, much less bring it forth.
"I will pacify it for you." Peace of mind is spontaneously brought about.
"I have searched for my mind." Human beings have long searched for the mind.
"I cannot take hold of it." You can take hold of it, but not in the way you expected.
"Now your mind is pacified." Your mind is pacified spontaneously, not by others.

Shibayama's Commentary
An old Zen Master sang: "For years I suffered in snow and frost; / Now I am startled at pussy willows falling." Not only Zen, but any religion in the world must have the reason for its existence in the guidance it gives to those who pursue this quest for peace of mind. By making this search one may finally be led to the realization that every effort is in vain. True peace of mind, however, can be obtained only when one is personally awakened to the stark-naked fact that every effort is ultimately in vain. Seek, struggle, and despair! "I have searched for the mind, and it is finally unattainable" -- this reply comes from the experience of plunging into another dimension. It is the cry of the person who has experienced that "the whole universe has collapsed and the iron mountain has crumbled." The key to the koan is in the experience of grasping the live significance of this word "finally" as one's own. 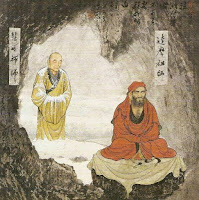 Another Anonymous Zen Master's Commentary (quoted by Shibayama)
To try to find a man on an uninhabited island may prove fruitless. Once, however, it is definitely established that there is no man there, the island comes into the discoverer's possession. This is international law. It is the universal law effective through the ages. The whole universe now comes into his possession!

Koun Yamada's Commentary
We are all searching for truth and peace of mind outside ourselves, which is like hunting for a man on an uninhabited island. Once you have found out that the island is uninhabited, your desire to search for a man there will end. When you stop desiring, your mind will come to rest. There will be no problems, no discontent, no frustrations, no uneasiness. You will be at peace, just as you are. Is there any happiness other than this?

Aitken's Commentary
The anguish of Huike facing Bodhidharma is the anguish of the heroes and heroines of fairy stories and folktales who must strive constantly, practicing that which cannot be practiced, bearing the unbearable. This is a treasure of the Path disguised as sheer misery. This treasure is found in all religions worthy of the name. It is the "dark night of the soul." Huike had no choice but to enter this dark night. We have no choice either. Bodhidharma said, "There, I have completely put it to rest for you." The rest that Bodhidharma confirmed in the heart-mind of his disciple is the same rest he sought to confirm in the heart-mind of Emperor Wu with his words, "I don't know."

Low's Commentary
If you ask someone who is on the Way, "Why are you practicing?" the answer you may well hear is, "I don't know, I simply have to go on," or some variation of this. Indeed, one could say if a person does know, he or shie is not very far on the Way. If one persists despite the travail, at a certain stage in the practice the frustrations, conflicts, and defects suffered by the personality become the fuel driving the practice forward. It is during this time that, in spite of oneself, one can make immense efforts that in sober moments seem impossible. You will never find it if you look for it; but if you do not look for it, what hope do you have?

Wumen's Verse
Coming from the West and pointing directly to it –
All the trouble comes from the transmission;
The one who disturbs the monasteries
Is originally you.

Anonymous Verse
The snow of Shaolin is stained crimson;
let me dye my heart with it
as humble as it may be.

Fenyang's Verse
Nine years the founder faced a wall, awaiting the proper potential;
Standing in snow up to his waist,the successor never relaxed his brow;
Respectfully he asked for a method to pacify the mind:
Searching for the mind and not finding it, for the first time in his life he was free from doubt.

Foguo Bai's Verse
Thinking, why seek to pacify mind?
Seeking out peace of mind causes pain to the body.
Three feet deep the snow where he once stood:
Who knows who it is in the snow?

Hotetsu's Verse
No one's arm was lost,
No weapons, no defenses, cut through;
Thus peace and disarming mutually entail --
And both are always already established.


Illustration by Mark Morse, http://www.thegatelessgate.com/
Posted by Meredith Garmon at 18:09