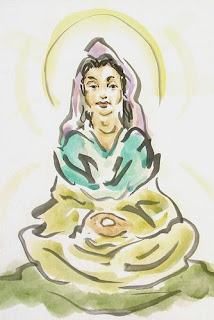 
By the activity existing before even a hint of this kalpa, a blind turtle faces the fire. By the phrase that's transmitted outside the scriptures, a mortar's rim spouts a flower. Tell me: is there something to receive, maintain, read, and recite?


A king of Eastern India invited the twenty-seventh patriarch, Prajnatara, for a meal.
The king asked, "Why don't you recite sutras?"
Prajnatara said, "The poor way [This poor follower of the way; "I"] does not stay in the world of subject [the realm of the skandhas; the realms of the body or mind] when breathing in, and has nothing to do with the world of objects [is not caught up in the many externals; doesn't get involved in myriad circumstances] when breathing out. I am always reciting the suchness-sutra in millions and millions of volumes."


Cloud rhino sports with the moon and glows embracing its beams;
A cloud rhino gazes at the moon, its light engulfing radiance
wooden horse plays in the spring, unfettered and fleet.
A wood horse romps in spring, swift and unbridled.
Beneath her brows, two chill blue eyes --
Under the eyebrows, a pair of cold blue eyes
what need to read sutras as though piercing oxhide!
How can reading scriptures reach the piercing of oxhide?
Bright white mind transcends vast kalpas,
The clear mind produces vast aeons,
a hero's strength tears through nested enclosures.
Heroic power smashes the double enclosure.
The subtle round hub-hole turns marvelous activities.
In the subtle round mouth of the pivot turns the spiritual works.
When Hanshan forgets the road when he came,
Hanshan forgot the road by which he came --
Shide will lead him by hand to return.
Shide led him back by the hand.

Background: From Transmission of Light

There was a certain youth of about twenty who had lost her parents in infancy and did not even know her surname so she had given herself the name of Keyura ('Necklace’); as a result of this, people called her the Necklace Child. She used to wander the countryside, spending the day begging alms like a sort of Bodhisattva Mahasthamaprapta. When people asked her why he was in such a hurry, she would reply, “Why are you going so slowly?” or, if they asked her her name, she would answer, “The same as yours.” People did not know why she said these things. One day, whilst the king and Punyamitra [the 26th Patriarch of the Indian lineage leading to Zen] were riding together in a carriage, they saw the Necklace Child who prostrated herself before them.

Punyamitra (26th Ancestor) to Prajnatara (27th Ancestor): Punyamitra asked Prajnatara, “Do you recall any events from your past lives?” Prajnatara answered, “I remember living in the same place as you during a distant aeon; you were expounding on The Scripture of Great Wisdom as I was reciting from that most profound of Scriptures. Today’s events undoubtedly tally with that ancient karmic cause.”

Punyamitra recognized that his meeting with the youth called Necklace did indeed tally with an ancient karmic cause. He told the king, “This youth is none other than the Bodhisattva Mahasthamaprapta; this holy one will be followed by two disciples; one will convert Southern India, the other will have karmic ties to China. After four or five years the latter will want to return here.” He then gave the youth the name Prajnatara ('Pearl of Wisdom’) because of their ancient karmic ties.


When Punyamitra asked Keyura, "Can you remember things of the past?" Keyura replied (as in the "Transmission of Light," adding:) "I have been awaiting you here to assist you in the true teaching."
Patriarch Punyamitra then said to the rajah, "This is not one of the lesser holy ones -- this is a bodily reflection of Mahasthamaprapta, 'The One Who Has Arrived at Great Power.'"
The rajah had the girl get into the chariot, took her to the palace and made offerings to her. When she put on monastic robes and had her head shaved, the patriarch drew on the connection with the prajna or Wisdom Scripture to have her named Prajnatara, "Jewel of Wisdom." Later, when Prajnatara was an old woman, the royal family provided for an assembly at which Prajnatara presided. She displayed wonders and fooled the crowd.


India was formerly divided into many kingdoms. This particular kingdom in Eastern India was evidently not that large, although we have no details. At any rate, the king of that kingdom greatly revered Prajnatara and converted to Buddhism. He then regularly invited Prajnatara to his court, serving her each time a special meal. Evidently Prajnatara never read any sutras on that occasion, although it was customary for the monastic to first recite sutras before receiving alms. But Prajnatara never did so. This prompted the king to ask: “Why don’t you recite sutras?”


"...invited Prajnatara for a meal." Over and over again he'll be paying back the debt of his mouth.
"Why don't you recite sutras?" Whoever receives a salary without service is uneasy in sleeping and eating.
"I am always reciting the suchness-sutra in millions and millions of volumes." The preceding lecture and eulogy was an unlimited excellent cause.


Prajnatara, Bodhidharma's teacher and the 27th Ancestor in our lineage, doesn't dwell in the realm of form, sensation, perception, conception, and consciousness -- the skandhas -- and so she doesn't get caught in a notion of a fixed separate self. Inhaling and exhaling, there is no inside or outside. Each breath reveals the sutra. To be poor is to have nothing and to hold onto nothing. Being poor in that way gives us the richness of not being constrained by external conditions. If you realize "the poor way" you are free to come and go. But if you don't, you're using counterfeit money to buy stock in a corrupt corporation.


“My inhalation does not stay in the world of subject.” Her inhalation has no connection with the subjective world. The word for "world of subject" also means "skanda" -- as the Heart Sutra, "Avalokitesvara clearly saw that all five skandhas are empty, transforming all suffering and distress." Nevertheless, the nuance of the word here is slightly different. Here we can understand it as referring to the self, which is made of the five skandas.
"My exhalation does not tangle with the world of objects." The original Chinese translated here as “the world of objects” means “the myriad relations.” The objective world is the world that comes into being in accordance with the law of causation. Subject and object are constructs of the mind; they are not the true fact. The true reality has no connection with subject and object.
"Still, I am always reciting millions and millions of scrolls of sutras." From morning to evening she is reciting millions of scrolls of the Sutra of Just This. It is the sutra of our true self. One of our Miscellaneous Koans reads: "All Buddhas and the dharma of the the Supreme and Unexcelled Enlightenment emerge from this sutra. What is this sutra?" All sutras come from this sutra. All dharmas preached by all Buddhas come from this sutra. In other words, it is the revelation of the true self every minute of the day. This is what is meant by “millions and millions of scrolls of sutras.”


The Invitation of the Patriarch to Eastern India

Old Blue Eyes doesn’t live anywhere.
Yet, for our sake, she rides her swift horse
through the open gate,
brandishing sutras
in the radiant moonlight.

Another king requests
an uplifting sermon
only to receive
a blast of arctic wind.
As it's getting late
I should go to bed.
Please turn off the lights
when you leave the treasure house.


Every dharma is dharma.
Realizing realizes.
She can recite the suchness-sutra
But can she stop?