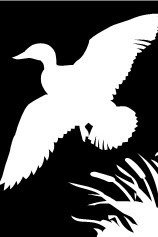 
The universe is not veiled;
all its activities lie open.
Whichever way he may go, he meets no obstruction.
At all times he behaves independently.
His every word is devoid of egocentricity,
yet still has the power to kill others.
Tell me, where did the ancient worthy come to rest?
See the following.


The wild duck! What, how, and where?
Wild ducks -- who knows how many?
Mazu has seen, talked, taught, and exhausted
Seeing the approach, Mazu had a conversation,
The meaning of mountain clouds and moonlit seas.
Telling all about the clouds on the mountains and the moon over the sea.
But Baizhang doesn't understand -- "has flown away."
Still not understanding, flying off instead,
Flown away? No, he is brought back!
As he tried to fly away, in the end he was held still.
Say! Say!
Speak, speak!


The next day Master Mazu ascended the rostrum and was about to deliver a sermon. Placed before the rostrum was the haiseki or "bowing mat." After the teisho it was the custom for the master to descend from the rostrum and perform bows. However, on this day as Mazu prepared to ascend the rostrum and deliver a teisho, Baizhang sprang up and began rolling up the bowing mat as if to say, "the teisho is finished." Mazu had no choice but to descend from the rostrum and return to his hut. Baizhang sauntered after him.
Mazu turned to him and said, "Why did you roll up the bowing mat even though the teisho was not finished?"
Baizhang said, "It really hurt when you twisted my nose yesterday."
Mazu said, "At that time yesterday where did you have your attention?"
Baizhang said, "Today my nose doesn't hurt any more."
Mazu said, "You have deeply understood today's matter."

Having received confirmation of his understanding, Baizhang expressed his deep thanks to his master, returned to his own quarters and began to sob violently, beside himself with joy.
One of the other monks living in the same quarters asked him why he was crying.
Baizhang told the monk to go and ask the Roshi, Mazu.
The monk went to Master Mazu's cottage and told him that Baizhang was crying loudly. "What has happened?" he wanted to know.
"Is that so?" said Mazu. "Well, go and ask Baizhang."
The monk returned to the monk's quarters only to find Baizhang this time wildly laughing.
More perplexed than ever, the monk said to Baizhang, "A few minutes ago you were crying; now I find you laughing. What a strange fellow you are!" Baizhang answered, "Before I was crying, now I'm laughing."


...walking along with Baizhang. The scene of the great master's efforts for others is unveiled throughout the world.
They saw wild ducks. Just when one would hope something would happen, they saw some ducks.
What is that? The great master must know.
"Wild ducks." "The straightforward mind is the site of enlightenment." This is the same as "What is that sound outside? The sound of raindrops."
Flown away. Where have they flown off to? Whoops! Damn! Got away!
What was this "flown away"? Mazu's whole body is fallen in the weeds.


Great master Mazu actually sees, but he's confronting Baizhang in order to help him. That doesn't work, however, and Baizhang says Flown away, missing the point again and again, unable to see. Baizhang was going to let it go at flying away, but Mazu held fast. This is called reviving method of sould recovery. When Baizhang cried out in pain, his pulse seemed to appear somewhat. After all, there is nothing outside of knowing that what is painful hurts and knowing that what itches itches. Now you know the "ducks" whose essential being has never moved. Where could they have flown off to? Do you know the wild ducks on your nose? Baizhang then realized what he had known all along, therefore he had an insight.


The master took advantage of every chance meeting to bring the student to enlightenment. The student, on his part, used every chance to ask a question, all in an
attempt to grasp somehow the real fact.
"What's that?" This is a formidable question. Just at the moment when Mazu was filled with the desire to somehow jolt his student into awareness of the empty and infinite essence, a duck bursts from the bushes. As phenomenon, a single duck – "What's that?" When someone like Mazu asks a question, you have to understand the spirit behind that question. A sharp-witted person would immediately sense he's talking about the empty/absolute. But Baizhang sees only the phenomenal duck. Mazu fires another volley: "Where did it go?" This, too, is a most formidable question. To speak in terms of coming and going is to see only the phenomenal world where it appears that there is actually such coming and going. Baizhang says, "It flew away." Some Zen books find this answer to be surprisingly Zen-like in flavor. Baizhang doesn't say where the duck flew, only that it flew away. Upon hearing this, however, Mazu concluded that Baizhang saw only the phenomenal duck. If he had seen the essential world, he would have been familiar with the world where the duck, although it flies away, does not go anywhere. While flying away, it doesn't fly anywhere. There is a world where, although we spend our days in walking, we do not go anywhere. For those who do not know this world, Zen will always seem like a conundrum filled with deliberate contradictions; but this is not so. From the essential standpoint we are not walking at all. Then Mazu plays his trump card. He suddenly grabs Baizhang's nose and twists it. Master Mazu says, "You say it flew away, but it's right here! Ouch! Ouch! Isn't that the duck crying?" The ancients were truly great. I doubt that there is a Zen master around today who could act so readily and forthrightly.


...out walking... Walking or sleeping, they never forgot Zen.
What is it? Beware! Danger is at hand!
It is a wild duck. This would have been a good answer if Baizhang had offered it with proper understanding of the "it." If "it" has flown away, this is a serious matter indeed.
...gave his nose a sharp pinch. A direct physical action of this kind is not recorded of any master prior to Mazu. Quite possibly he was the initiator of a new sort of Zen spirit, which used beating, pushing, shouting, and other violent measures. A Zen teacher expects you to understand before a word has been uttered. Baizhang had already failed twice. Pain has often been accompanied by realization Xuansha Shibei stumbled over a stone and stubbed his toes. Pain pervaded his body, and when he came to himself he found he was enlightened. Muzhou Daoming pushed Yunmen out of his room and slammed the door so quickly, and with such force, that Yunmen's leg was caught in it and broken. He cried out with pain and at that moment had a great experience. It is not, of course, pain alone that accompanies realization. The activity of any of the senses may be involved. This is because sensation is the intuitive action of the first nen, which performs direct cognition of external objects. Why, then, is it that though everyone uses his five senses every day, he does not become enlightened?

Wild ducks, coming together,
who knows where they go?

They told me of the clouds on the mountain
and the moon all over the sea.

They've flown awy
You wanted to fly away too.


Beloved progenitors, deceased.
Friends, grown estranged.
The hour before that awful mistake.
Youth.
Last summer.
The spring before.
How did it ever fly away?
It was always gone, and is always here.
This cold comfort burns
And burns.