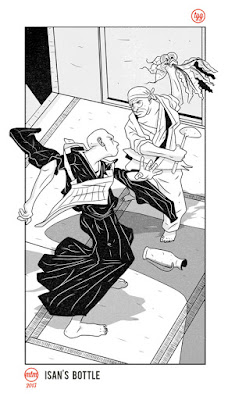 Personnel
Baizhang (720-814, 9th generation, Hongzhou) was a disciple of Mazu (709-788, 8th gen.) and the teacher of Huangbo (770-850, 10th gen) and Guishan (771-853, 10th gen). Baizhang appeared as a secondary character in two of the Mazu koans. He is the primary character in seven of our cases.
Guishan became a Buddhist monk at age 15, engaging philosophical studies of Mahayana and Theravada Buddhism. Determining to study Zen, he entered Baizhang's monastery in 793 at age 23, when Baizhang was 74. Guishan together with his disciple, Yangshan (807-83, 11th gen), is the founder to the Guiyang (from GUI-shan + YANG-shan) house, one of the five great houses of Zen. At the time of this koan, Guishan was in middle life, perhaps 47 or so. Guishan Lingyou (Isan Reiyu, 771-853, 10th gen). Go to GUISHAN L

Case
When Master Guishan was under Baizhang, he had the position of tenzo [cook]. Baizhang wanted to choose a master for Great Gui Mountain in the province of Konan. He called the head monk and the rest of his disciples together to have them present their views and said that the outstanding person should be sent.
Then he took a water jug, put it on the floor, and said, “You may not call this a water jug. What will you call it?”
The head monk said, “It cannot be called a wooden sandal.”
Baizhang then asked Guishan. Guishan immediately kicked over the water jug and left.
Baizhang laughed and said, “First monk, you have been defeated by Guishan.”
So he ordered Guishan to found the new monastery.

Backstory I, from Sekida
One night Guishan was in attendance on Baizhang, sitting till late in the quietness of the mountain temple.
"Who are you?" Baizhang asked.
"Lingyou" [Guishan's given name] replied Guishan.
"Rake in the fireplace."
Guishan did as he was told and said, "I find no embers left."
Baizhang took up the tongs and, raking deep down, brought up a tiny burning ember, which he showed to Guishan, and said, "Just this, you see!" Guishan was suddenly enlightened. He made deep bows and presented his views to Baizhang, who said, "You have reached a crossroads on the journey. It is said in the sutra, 'If you want to see Buddha Nature, you should observe time and causation.' When the time comes, you will realize it, just like remembering something you have forgotten. It is not obtained from others. Therefore, when you are enlightened it is just like when you were not enlightened. No mind, no Dharma. If only you have no delusions, and no discrimination between the Buddha and the unenlightened, your original nature manifests itself. Now you have attained it. Mindfully cultivate it."
Guishan stayed with Baizhang for 20 years. He was 43 when Baizhang died at the age of 94. Then Guishan went to Mount Gui.

Backstory II
There was a man named Sima Toutuo who was a traveling Daoist psychic and geomancer. He was a true friend of many monks, often calling at one monastery or another and associating with Zen teachers and their pupils. He told Baizhang that he had found a good site on a mountain in the state of Konan where a great monastery should be established.
"How about me?" said Baizhang.
"No," said Sima. "You are too little and ascetic. This is a broad mountain that needs someone large and vigorous."
Just then the head monk came in. "How about him?" said Baizhang.
"Show me how you cough," Sima said. "Hmmm. Now show me how you walk. Hmmm. You won't do." Sima thus rejected the head monk.
Guishan, the cook, happened to pass by. "Here is a good one," the traveler said to the master.
The head monk was very indignant, and said, "No one can say that the cook is better than the head monk in this monastery."
So Baizhang told his pupils that whoever answered a question most ably would be appointed.

Wumen's Comment
Guishan summoned up all his valor, but, alas, he could not jump out of Baizhang's trap. Upon examination, he favors the heavy and not the light. But why? Look! Though he removed his headband, he put on an iron yoke.

Wumen's Verse
Tossing away the bamboo buckets and ladles,
He makes a vigorous thrust and cuts off hindrances;
Baizhang's heavy barrier cannot interrupt his rush,
Countless Buddhas come forth from his toes.

Shaozhao's Verse
What determines the hero is the water jug;
At the point of minutest distinction, there are no more emotions.
Great peace is originally for the general to bring about,
But the general is not allowed to see great peace.

Tongzhao's Verse
The great function needs an expert to know;
On the spot, one kick put an end to doubt.
What a pity those who do not succeed in Zen
Do nothing but judge right and wrong at the jug.

Cleary's Comment
Baizhang wanted a Zen center that pulsed from its own enlightened heart, not a mere clone or branch of his own school. This is why he did not appoint the senior disciple, but devised a special way of bringing out a truly exceptional successor.

Low's Comment
The monk evidently saw words as labels, as things one sticks on other things. This is a common view. However, words are only labels after they have lost their generative power. Before this they bring things into being. The generative power is illustrated in Genesis: "God said, 'Let there be light,'" as well as in the ending of Christian prayers: "in the name of the Father and of the Son and of the Holy Ghost."
The abracadabra of the stage magician is a vague reminder of the close connection between magic and words. It is said that to control the devil, one must name the devil. And one must not take the Lord's name in vain. There is also the story of a woman with schizophrenia: she would have bouts of panic and fear when objects seemed to look at her with malevolence, and the only way she could control her fear was to call out the names of the objects....Our psychic life does not begin with things but with immediate experience.

Baizhang Quote (cited by Low)
By the ineffable subtlety of thinking without thinking, turn your attention inward to reflect upon the infinite power of the divine spark. When your thinking can go no further it returns to the source, the eternal home of nature and form, where phenomena and noumenon are not dual but one. There abides the Suchness of the true Buddha.

F.H. Bradley Quote (cited by Low)
In the beginning there are no relations and no feelings, but only differences that work and are felt but not discriminated....The total state is an immediate feeling, a knowing and being in one. It is unity complex but without relations. Feeling is not one differentiated aspect but holds all aspects in one.

Senzaki's Comment
He answered the question. He declared what it was without calling its name. He kicked all in all, and exposed the changeless Dao.

Verse by Tennyson (cited by Senzaki)
Flower in the crannied wall,
I pluck you out of the crannies,
I hold you here, root and all, in my hand,
Little flower -- but if I could understand
What you are, root and all, and all in all,
I should know what God and man is.

Yamada's Comment
From the essential point of view the water jug is void. Therefore, it is not wrong to call it anything you wish. In the language of my fraction, the water jug is the numerator; but we must never forget that the denominator is always there. In Guishan's heart there is no enlightenment, no delusion, no Budddhism, no philosophy, no concepts, no thought. His departure is meant to say, "I'll have nothing to do with such a foolish matter. I'm busy in the kitchen!" Essentially, there is not a thing in all the whole universe. Where will the dust collect?

Aitken's Comment
When our son was about six years old, I asked him, "Suppose you couldn't say that your name is Tom. How wouldyou call yourself?" He said, "That's a very hard question." A better answer than the head monk's, I think. When I told this story to my sangha, one of the members went home and asked his five-year-old son, "If you weren't Mischa, what would you be?" Mischa said, "A tree." Another good one.
When Guishan stepped to the bottle and tipped it over, what was in his mind? The Diamond Sutra says: "Dwell nowhere and bring forth that mind." Guishan was not restricted by any thoughts of winning or losing. He was completely free from all relative thought. His mind was empty -- and thus he could act with rigorous rightness. His essential being took essential action. The complication of the water bottle and its name was shattered forever. His walking out is also full and complete: nothing missing, nothing left over.

Shibayama's Comment
Natural and free working flowing out of true Zen spirituality and unusual or eccentric behavior with a stink of Zen should never be confused. What is essentially required of a Zen man is that he once and for all cast himself away thoroughly and completely. True Zen working will naturally and automatically flow out of this fact of his being no-self, or True Self, in his everyday life. If you call it a pitcher, you are attached to its name; if you call it not-a-pitcher, you negate the fact. Guishan's stark-naked True Self had no shadow of discrimination at all, and this True Self, or no-self, naturally developed the wonderful working of no-mind.

Forestory
Guishan went to the mountain to prepare for the establishment of his monastery. At the top of Great Gui Mountain, he built a hut of mud, branches, and straw. He ate chestnuts and berries, made friends with monkeys, birds, and rabbits. But nobody came. Eight years passed. Finally he said to himself, "This doesn't make sense. I'm supposed to be the founder of a great monastery, but here I am all by myself in a miserable little hut, talking to monkeys. I'm going back to civilization where I can be effective."
So he packed his gear and started down the mountain. On the path he met a tiger, who grasped him by the sleeve. Guishan figured the tiger was trying to tell him something, so he turned around and went back to his hut. Soon after, three monks appeared. Imperial assistance was extended to build a great temple. In 820 the monastery of Guishan was finally built. Eventually, 1,500 monks gathered there to study Zen under his guidance.

Hotetsu's Verse
Every true assertion is also false.
Every false one also true.
Speech, calling a thing this or that, is a hawk's cry in a canyon.
It says neither something nor nothing, and it echoes.


Illustration by Mark Morse, http://www.thegatelessgate.com/
Posted by Meredith Garmon at 12:27