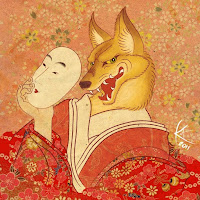 
If you memorize the character for “One” and stick to it in your heart,
You will swiftly fall into hell like an arrow.
If you have swallowed one drop of slobber of the fox,
You can never spit it out for thirty years.
It is not that the Law in India has been too strict;
It is just that the karma of the stupid fellow has been miserably heavy.
Has there ever been anyone who has committed such a transgression?


Whenever Master Baizhang delivered a sermon, an old man was always there listening with the monks. When they left, he left too. One day, however, he remained behind. Baizhang asked him, "What man are you, standing there?"
The old man replied, "In the past, in the time of Kashyapa Buddha, I lived on this mountain as a Zen priest. Once a monk came and asked me, 'Does a perfectly enlightened person fall under the law of cause and effect or not?' I said to him, 'He does not.' Because of this answer, I fell into the state of a fox for 500 lives. Now, I beg you, Master, please say a turning word."
Baizhang said, "The law of cause and effect cannot be obscured."
Upon hearing this, the old man became greatly enlightened.


A foot of water, a fathom of wave --
for five hundred lives he couldn't do a thing.
"Not falling, not evading" was their exchange;
'Not falling,' 'not blind,' they haggle
as before they're bound in a tangle.
As before entering a nest of complications.
Ah, ha, ha! Understand?
If as to this you're unattached
If you are clear and free
my baby-talk won't disturb you.
There's no objection to my babble.
Shrine-songs and dance of themselves harmonize --
The spirit songs and shrine dances spontaneously form a harmony --
hands clap the intervals and melodies are hummed.
Clapping in the intervals, singing 'li-la.'


Not falling, not blind;
For monks or layfolk there are no taboos.
The bearing of a freeman is like a king's --
How can he accept the enclosure of a bag or covering by a lid?
One staff can be horizontal or vertical --
The wild fox leaps into the company of the golden lion.

"One Ancient Master," quoted by Wick


When fish swim, the water becomes cloudy. When birds fly, they lose their feathers. For nothing can escape from the perfect mirror of causality, which is as vast and universal as the sky. For five hundred lives, the monk became a wild fox, because he failed to understand Buddhist causality, which is as strong as a bolt of lightning or a raging typhoon, as unchangeable as gold which has been purified many times over.


The traditional Buddhist understanding of karma teaches that upon attaining enlightenment, a person is no longer subject to transmigrations based upon past karma, have transcended the law of cause and effect -- but be careful talking that way or you too may be reborn as a fox or become a ghost! But once we open our Zen eye and see clearly what karma is, then this host story doesn't really have any significance. Once we penetrate into this koan we can experience our own liberation. The fact of cause and effect is clear and undeniable; nothing in the universe exists, if not for the actions of cause and effect. Every moment, every breath, every life is causation itself. We are born and manifest according to karma, but the karma is not just our karma. It's the karma of everyone and everything. When falling and ignoring, and not falling and not ignoring,
are transcended and wiped away, then you will see yourself as Baizhang and as the fox, and you will experience directly the truth of this koan. If you are born as a fox, be a fox. Then it is not a matter of heavy karma or liberating karma. How can we be peaceful no matter what conditions our karma brings? That's the challenge of our practice. To liberate ourselves from our karma we must become karma itself.


The phenomenal world comes into existence through the law of cause and effect. Enlightenment is realizing the essential world, where there is not one thing. Is a person who is not dwelling in the world of phenomena and who has clearly grasped the essential world also subject to the law of cause and effect? The visitor reports he had said that such an accomplished person does not come under the control of cause and effect. This reply is from the viewpoint of the denominator of our fraction, which is zero and infinite. Because the world of the denominator is zero, there is nothing that comes under the control of the law of causality. But this is only half of the matter. And because it was only half, he became a fox for 500 lives. He asks Baizhang for a "turning word" -- a word or phrase that “turns” illusion into enlightenment. Baizhang says, “He does not darken cause-and-effect.” In other words, cause-and-effect exist quite clearly and cannot be darkened in the least. Baizhang references the world of phenomena. It is only when the two aspects are combined that it becomes the single reality. Up to now it had been only half of the whole, but from the very start they have been one. The true self is neither just the denominator nor simply the numerator. They are one. We could say that the entire fraction itself is the actual fact.


Take care of causation. But also be free from causation, which is a mind that is beyond good and bad, right and wrong, time and space. There is a oneness of cause and effect that arises in each moment. One step is practice/enlightenment itself.

1.
Great bodies of knowledge
Freud, Jung and the rest of the family.
One thoughtless laugh arises from
below my umbilicus
And I can walk upright
Breathing freely.
Painting and maintaining the three bodies
with the teflon of Awareness.
Oh, so easy to be blinded by the light
And then teach others the same delusion.

2.
A turning phrase, not blind to cause and effect.
A gift of the heart
Suspended, endlessly, from a fulcrum emerged from stillness.
In Delusion but not of Delusion.

My five hundred
joyful years
spent as a fox
were interrupted
by bulldozers.
Now a russet harvest moon
rises above
the endless fields of wheat.

A fox:
Just what it must be,
And a constant surprise.
Every moment a fox --
Every action a turning word.