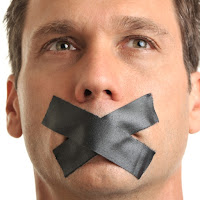 Personnel
Baizhang (720-814, 9th generation, Hongzhou) was a disciple of Mazu (709-788, 8th gen.) and the teacher of Huangbo (770-850), Wufeng (770?-?), and Guishan (771-853). Baizhang appeared as a secondary character in two of the Mazu koans. He is the primary character in seven of our cases.
While Guishan and Wufeng ultimately received dharma transmission from Baizhang, Yunyan, after studying under Baizhang 20 years, went to study with Yaoshan, whose dharma descendent he became. BCR #70, #71, and #72, all feature Baizhang asking, "How does one speak with one's lips and throat closed?" #70 gives Guishan's reply; #71 gives Wufeng's reply; #72 gives Yunyan's reply.

Case
Guishan, Wufeng, Yunyan were all attending upon Baizhang.
Baizhang said to Wufeng, "How does one speak with one's lips and throat closed?"
Wufeng said, "You too, Master, should close your lips and throat."
Baizhang said, "Where there is no one, I will shade my eyes with my hand [a gesture expression admiration] and look up to you respectfully."

Xuedou's Verse
"Osho! You should shut up!"
Upon the dragon's line
He plans his counterattack.
Let's think of General Li,
Who shot the eagle
In the distant sky.

Yuanwu's Comment
Guishan held fast to his territory -- Wufeng cut off the myriad streams. Wufeng functions directly and immediately: his reply is urgent and swift, perilous and steep. He's not like Guishan who is so relaxed and easy-going and exuberant.
"Where there's no one, I shade my eyes with my hand and gaze out towards you." But say, is this approving of Wufeng or not? Is it killing or bringing to life? Seeing him turn so smoothly, Baizhang just was giving him a check.

Hakuin's Comment
"How would you speak...?" Each time it is brought up it is new.
"You should shut up too." He borrows water to offer flowers.
"I look to you where there are no people." Most reasonable! If he's too strict, he won't have any attendants at all. A breeze stirs below a cliff; a tiger plays with its cub.

Tenkei's Comment
Wufeng turned around and cut off Baizhang's tongue. Xuedou refers to this act as watching the strategy on the front lines. Yuanwu calls it an immediate cutoff, a sharp maneuver.
"Where there are no people." "If I can't find the right person, I'll call for you." This is a reply that half approves and half disapproves.

Sekida's Comment
This case follows from the previous one. There Guishan was letting go; now Wufeng is holding fast. By holding fast, he excluded others and isolated himself. This is what Baizhang refers to in his words, "In the distant land where no one stirs." In absolute samadhi, you are in total seclusion and purify yourself. This is called "planning profit for yourself." Then you are expected to come out into the busy world in positive samadhi and work for others. That is called "planning profit for others." When mature, one is supposed to be able to do both. Though Wufeng's answer was to be admired, he was not equal in maturity to Guishan.

Yasutani's Comment (cited by Yamada)
"Where there is no one around I put my hand to my forehead and gaze at you." If there were others around, I probably wouldn’t be able to do it. But when there’s no one else around it’s all right for me to look at you like this.

Iida Toin's Comment (cited by Yamada)
“where there is no one around...”: Since there are no suitable persons around at the moment, I will look up to you as such a person.

Yamada's Comment
"You, too, Master, should keep your mouth shut." A rather high-handed way of addressing one’s own master, and a very different reply from the one given by Guishan. But this, too, is “the one word of the quick man.” With this single phrase, Wufeng has cut off all delusive thoughts and distinctions. Although Guishan’s answer had an air of stately dignity to it, Wufeng's is sharp and terse.
"Where there is no one around I put my hand to my forehead and gaze at you." Putting the hand to the forehead is a gesture of looking up at a very high place; there is a feeling of respect to it. Baizhang does seem on one hand to be praising Wufeng for his reply and putting him down at the same time. After all, he adds the stipulation “where no one else is around.” The different interpretations are alike in seeing Baizhang's reply as one of partly praising and partly putting down. Wufeng has presented the world of “one color.” He is totally alone in the world of satori. He is “dangerous and unapproachable,” to use a traditional Zen term for this state of enlightenment. It is like being alone on a desert island. So looking at Baizhang's reply, “Oh, how great you are!” he seems to say, putting his hand to his forehead, as if looking at a high and lofty peak. He praises Wufeng while poking fun at him at the same time

Rothenberg's Verse
Still Staying Silent
With your mouth sealed, what will you say?
You should cease from asking and also be silent.
When there's no one here, I'll cover my eyes
and stare straight to you.
Past the boundless horizon a kingfisher soars
He admits to the target: I hit when he's flown past.
Miraculous arrows.
One strike fells an eagle.
No chance of escape.
no sense of the bullseye, no sharp-pointed question.
No praise, no blame, no speech, no answer.
My whole body is stuck in the mud.

Hotetsu's Verse
The monkey leaped far from branch to branch, and
Now would instruct the eagle and turtle alike how to soar.
Shoulding the teacher is a gutsy display,
But what do you do for an encore?
Posted by Meredith Garmon at 13:37