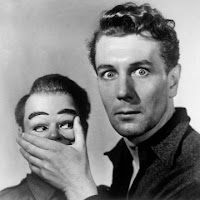 
Guishan, Wufeng, Yunyan were all attending upon Baizhang. [See BCR70 and BCR71]
Baizhang said to Yunyan, "How does one speak with one's lips and throat closed?"
Yunyan said, "Can you, Master, do such a thing?"
Baizhang said, "Now I will lose my Dharma descendants."


Yunyan was an attendant for 20 years at Baizhang. Later, he went with Daowu to Yaoshan.
Yaoshan asked him, "When you were in Baizhang's congregation, what was your purpose?"
Yunyan said, "To escape birth and death."
Yaoshan said, "Have you escaped yet or not?"
Yunyan said, "There's no birth and death for this one."
Yaoshan said, "Twenty years at Baizhang and your force of habit still hasn't been cleared away yet."
Yunyan took his leave and went to see Nanquan. Later he returned to Yaoshan and at last understood and was enlightened.

Further Sequel, from Transmission of the Light


One day Yaoshan asked Yunyan, “You stayed for twenty years with Baizhang. What words did Baizhang use to instruct his students?”
Yunyan answered, “One day, Baizhang said he would deliver a sermon, so everyone assembled. When Baizhang arrived, he suddenly began flailing his stick, and everyone ran away. Baizhang suddenly cried out, ‘Hey!’ and everyone turned around to see. Then he cried out, ‘What is this!?’”
Yaoshan said, “Why didn’t you tell me that before? Having heard that story today, I have finally come into contact with Baizhang's true marrow.” Hearing this, Yunyan suddenly came to great enlightenment.


"Can you, Teacher?" Does the teacher have lips?
"Bereft of descendants" "At that rate, I've lost my posterity." If the upbringing of the son is not as good as the father, he says, the family fortunes will decline in one generation.


"Can you, Teacher?" means "Do you have anything to say with your mouth closed or not?" The implication is that he surely has nothing to say. Unfortunately, he bit the dust on level ground.
"Bereft of descendants" The fact that Baizhang said nothing more than this indicates a reply of complete disapproval.


Look how the ancient man Yunyan studied and investigated for twenty years and still was half green and half yello (unripe). He stuck to his skin and clung to his bones, mud and water streamed off him, and he couldn't break through. He was indeed this way; in fact, ahead he didn't reach the village, behind he didn't get to the shop. Yunyan just went to test the other man's depths. Baizhang saw him acting like this and spoke words that immediately held Yunyan and struck him dead.


If your words do not leave the old cliches,
How will you be able to get out of what covers and binds you?
White clouds lie athwart the valley mouth,
Making so many people miss the source.


Yunyan was slow in maturing. When this question was aksed him he was still immature. Later he became a great Zen master. Yunyan's question back to Baizhang can be paraphrased in two ways: (1) Have you (representing Buddha Nature) any mouth or lips? or (2) Have you, on your part, asked your question with your mouth and lips closed? Had Yunyan said this with good understanding, it would have produced an excellent effect. But Yunyan was still groping blindly in the dark, and his attitude was irresolute and dull. He was not keen-edged, as were Guishan (BCR70) and Wufeng (BCR71), and Baizhang rejected his answer. One may snap one's fingers either to arouse others or to indicate one's rejection of them. Baizhang tried to arouse Yunyan, but in vain.


Yunyan's reply seems rather slow-witted.
"I lose my descendants." I.e., “With an answer like that, my dharma will disappear in no time!” Yunyan was evidently not yet enlightened at this point. Enlightenment is a matter of ripening. If karmic causes have not ripened to a certain point, it will be impossible for even the most outstanding student to come to true enlightenment. Even a great person like Yunyan took twenty years (plus his first stint with Yaoshan, plus his time with Nanquan) to come to enlightenment, although he was undoubtedly searching with utmost earnestness throughout those years. His search left him no peace until he found the answer. As I often tell you, far better than coming to a quick, shallow experience is having a deep experience, even if it takes a long time. Our essential nature is infinite and absolute, but until we become aware of this, we can never attain true peace of mind. But, if we truly believe this, even though we have yet to experience it directly, we can still gain a certain peace of mind.


"Have you still got a mouth and lips?" I.e. "How is it that you are still going on talking after all you have said to us?" Baizhang then says, Yes, I keep on using mouth and lips -- and I shall have to mourn for my school of thought. I have been talking so much in trying to explain things that my teaching is in danger of becoming nothing better than eloquent speech-making, in which case nobody will want to come to learn from me.

Stick to the skin, cling to the bones,
Wake up with a silent voice kept in.

I have lost the screen of the future,
through which the past is seen.

Inside mute subtlety only clouds.
Mix dirt in the river,
shock the body awake
with a cool plunge in the deep.


"Can you, Master, do such a thing?"
Beloveds, did anyone notice that
Yunyan said this with
His lips and throat closed?