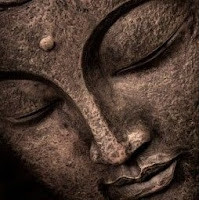 
It is futile to brood over the swiftest action that could catch the lightning; when the roaring thunder assails from the sky, you hardly have time to cover your ears. The scarlet banner flutters over the head; the twin swords are whirling behind the ears. If you are not equipped with an able eye and swift hands, how could you match that person? Some people lower their heads and keep pondering, trying to figure it out with their delusive thinking. They scarcely know that they are seeing countless ghosts around the skull. Now, tell me, if someone does not fall into delusive thinking, or get caught up in gain or loss, having a very clear understanding of the matter, how will you face such a person? I will try to show you an example, look!


Panshan, giving instruction, said, "In the Three Worlds [the world of desires, of materials, and of non-materials], there is not one thing. Where should one seek the mind?"


Three worlds, no Dharma,
Where could you find the mind?
No things in the world -- where to seek mind?
White clouds crown the heavens,
The streams draw music from the harp --
White clouds make a canopy, flowing springs a lute --
Tunes and harmonies which none can understand.
One tune, two tunes, no one understands.
The night's rain has brought the autumn waters deep.
When the rain's passed, in the evening ponds the autumn water's deep.


Panshan said, “You have to look for it yourself. No one can do it for you. In the three realms there is not a single dharma, so where will you seek mind? The foundation of the four elements is empty, so where does Buddha abide? The firmament is unmoving. It is still and speechless. If you come face to face with it, then there is nothing left to do. Take care.”

Other Tales of Panshan


One day as he walked in the market, he overheard a customer speaking to a butcher.
The customer said, “Give me a cut of the best quality.”
The butcher put down his chopper, folded his hands before himself, and said, “Sir, where is there any that is not the best quality?”
Upon hearing these words Panshan had an awakening.

On another day, Panshan witnessed a funeral and heard one of the mourners wail, “The red orb inevitably sinks in the west. Who knows where the soul goes?”
In the funeral tent, the deceased person’s son cried out, “Alas! Alas!”
These words reverberated through Panshan. He then returned to tell his experience to Master Mazu, who confirmed his awakening.

After Panshan assumed the position of abbot at a Zen monastery, a monk asked him, “What is the Way?”
The master cried out, “Aaagh!”
The monk said, “This student doesn’t understand your meaning.”
The master said, “Go!”

When Panshan Baoji was near death, he said to the monks, “Is there anyone among you who can draw my likeness?”
Many of the monks made drawings for Panshan, but none were to his liking.
The monk Puhua stepped forward and said, “I can draw it.”
Panshan said, “Why don’t you show it to me?”
Puhua then turned a somersault and went out.
Panshan said, “Someday, that fellow will teach others in a crazy manner!”
Having said these words, Panshan passed away.


“The mind-moon is alone and completely round. Its light swallows the myriad phenomenal things. The light does not illuminate objects. Nor do any objects exist. Light and objects simultaneously vanish. Then what is this?”
Dogen quoted this in connection with his "Poem on One Mind":


Although seeing the moon of the mind,
in the great sky,
being deluded in the darkness,
I praise it for its shape and color.

“If you say, ‘Mind is Buddha,’ then you still haven’t entered the mystery. If you say, ‘No mind, no Buddha,’ then you’re just pointing at the traces of the ultimate. Even a thousand saints can’t transmit the higher road to others. You students are tormented by form. You’re like apes grabbing at shadows.”

“The great way has no center, so how could it have a front or back? Vast space is endless, so why speak of measuring it? Emptiness being thus, how can one speak of the Way?”

“To successfully practice the Way is like the earth, which while upholding the mountains is unaware of the solitary peaks. It is like jade that is concealed within stone. The stone is unaware of the jade’s flawless nature.* Those who practice in this way may be said to have ‘left home.’ The ancient teachers said, ‘The great way is unimpeded and permeates past, present, and future. Persons without activity or worldly affairs—can golden manacles hold them?’ Thus, the brilliant single numinous Way is absolutely unborn. Transcendent wisdom is not clear. True emptiness leaves no trace. ‘True thusness,’ ‘mundane,’ and ‘sacred,’ are all just talk within a dream. ‘Buddha’ and ‘nirvana’ are just extra words.”


"Where can mind be found?" Examine for yourself. Immediately striking, I would say, "What is this?"


Everyone understands, "The triplex world is only mind, myriad things are only consciousness." Panshan's saying is a pearl in a worn-out cloth pouch; those who know do recognize it is a treasure. Somehow it seems that no one really understands this saying.


When it is said that there are not hings, one might shrink back, thinking it means there is nothing at all, but what is this right in front of you?
Seek the mind -- What are sensation perception, consciousness, and cognition? Get hold of yourself and look: is it nothing that says there is no thing, or is it something that springs forth saying there is some thing? Analyze the verse carefully.


The Realm of desire is this common world we now live in. It's named this way because our world is made up of a bundle of desires, with people who covet anything and everything. The Realms of form and of no-form are invisible worlds. The realm of form is a world with a certain boundary; if the "boundary" disappears, there is only spirit, then we are in the Realm of no-form. However, all three of these Realms are worlds of delusions.
"There is not one thing." The original term for "thing" here is dharma. This term can mean "thing" or "phenomenon." Panshan says there's nothing at all to perceive. He refers to the world of Mu, that world where there is "not a speck of cloud to obstruct the eyes." Yet there is this someone who says, "In the three Realms, there is not one thing"! When you ask who that could be, that is what we call our mind. But where on earth is that "mind"?
The Heart Sutra says, "Form is nothing but emptiness, emptiness nothing but form." Therefore, "form" is "emptiness." So, when you are told to show the world of emptiness, you bring out the world of form. It's extremely difficult to grasp clearly that the world of form is the world of emptiness itself. You must pound it into your head very well. If you think that mind and dharma, mind and form are distinct and separate from each other, you are mistaken. Master Banzan asks that question in order to ensnare you. Thing and mind are originally one, but we cannot help thinking of them as being two separate and distinct entities. If someone says, "Bring out the mind," you would normally answer, "I can't, because the mind has no form, no shape." However, that mind, that which is nothing, is form itself. If you have grasped clearly that emptiness as such is form, then when you are asked, "Bring out the mind," you can immediately answer, "This!" [striking belly]. In this case, there seems be the "mind" inside this [belly], so it may seem to be easy to "bring it out." But: "Bring out the mind" – "Cherry tree!" Can you respond like this immediately? They are all one. But if you think about the "one"-ness and try to bring out that "one," you'll fail. That's not "an action that could catch the lightning," like an image that reflects immediately upon the mirror. Even if it's something thought out in a computer-like mind and comes out in a split second – which may seem quick enough – that won't do either because it still takes a bit of time. You can't compare this at all with the image reflected in the mirror that comes out with the speed of light. Only when it comes out like this – Zap! – is it the action grasping the lightning bolt. So, if you are told to bring out "In the three Realms, there's not one thing," you must view that command from this perspective. Mind and material are not two separate and distinct entities. If you say, "There is surely the fact of 'nothingness,' but I cannot bring it out, no matter how hard I try," that's because you have realized the matter only halfway.


The three worlds, together, embrace the whole universe, spiritual and physical. To say that there is no Dharma means that there is no universe -- that is, no universe such as we conceive of by the operation of our ordinary thought processes. The idea of the Dharma, or the mind, is a concept produced by thought. It is quite a different thing from our real, immediate experience. When Panshan says there is no Dharma, no mind, he is refusing to equate the idea with the direct experience. "The world is not the world, and it is called the world" (Diamond Sutra, Section 13-c). The mind is not the mind, and it is called the mind. How can you recognize the mind, then? No, there is no mind. There is only a certain internal pressure, a nen-thought, which momentarily appears and then disappears. Panshan transcends all conceptual treatment of the problem. The question can be solved only by returning to the intuitive grasp of the present. It is very difficult to give a plausible explanation of Panshan's words in philosophical terms. It is not so difficult to grasp his meaning, however, if you attain the state of absolute samadhi, because in that condition there are no space, no time, and no causation, which is another version of "no Dharma, no mind." Concepts are necessary to the human mind, but concepts must follow experience and explain it, not the reverse.

there are ghosts before you, they won't go away

Once the arrow leaves the bow, it will not come back.
The moonshadow strikes the archer at night.

There is nothing in this triple world
Nothing one, two, three times or more.

The white clouds are a ceiling.
The stream plays the world like a lute,
one pluck, three strings, no one sings along.
All the tones may be clear,
but when you hear them, you're mute.

When the rain has passed, the river is deep.
Dragging in mud, dripping in water,
run from the thunder, no time to sleep.


The mind, being nothing apart from things,
Is found in all the things.
And things?

Wake up and roll out of bed.
Before long, one steps into a desire:
wanting something or wanting it gone.
Pop, pop, pop, desires appear all through the day.
Sometimes, though, a grace:
Attachment/aversion peels away
leaving the bare form of the thing.
If that, too, departs: only an idea or memory of the thing.

Where, then, is there a thing?
Not in the residual no-form imagined thing.
In the form?
It is without essence, without a part distinct or enduring.
Desire, then, which imputes such a thingy feel?
No: the substance of "I want"
makes a delusion, not a thing.
At every level and angle,
All things are nothing things.

The mind, being a nothing mind,
Is found in all the nothing things.