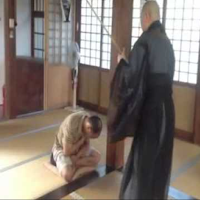 Yuanwu's Preface
The sacred sword is ever in hand: it is death-dealing and life-giving. It is there, it is here, simultaneously giving and taking. If you want to hold fast, you are free to hold fast. If you want to let go, you are free to let go. Tell me how it will be when one makes no distinction between host and guest, and is indifferent to which role one takes up.

Xuedou's Verse, Sekida Trans
Easy to call the snakes, hard to scatter them.
How splendidly they crossed swords!
Although the sea is deep, it can be drained;
The kalpa stone is hard, but wards away.
Old Wujiu! Old Wujiu!
Who is there like you?
To give the stick to another --
That was truly thoughtless!

Xuedou's Verse, Cleary Trans
Summoning is easy, sending away ishard;
Observe the exchanging thrusts in detail.
The rock of ages, though solid, will still crumble;
The depths of the oceans must instantly evaporate.
Old Wujiu, old Wujiu -- how many are equal?
Giving another the handle was very much without reason.

Tenkei's Comment
In all the space of the entire universe, what different thing could there be, says the monk, giving every indication of being a Zen monk with some insight.

Sekida's Comment
From the beginning in a Dharma battle, there is no ego at work. Surging waves may arise in the encounter, but they pass away like clouds moving across the bright face of the autumn moon. Nothing is left behind.

Yamada's Comment
The monk cries out, “A stick must have eyes!” He says in effect: “It is all right to hit me if there is a good reason for it, but you shouldn’t go around hitting people indiscriminately, Master. Your stick is a blind stick.” But Wujiu fires back with, “Today there’s someone to hit.” In other words: “Today there is someone who is worth hitting and it feels great to hit him!” And he administers yet another three blows. The monk thereupon walks out as if to say, “There’s no use in my staying here.” At this point we still don’t know what caliber the monk is. Seeing the monk taking his leave, Wujiu says, “There’s someone who’s been receiving a blind stick all along.” He seems to be taunting the monk for submitting to what the monk himself called a blind stick.” The monk turns around and says, “When the stick is in your hands, what can I do about it?” Here the exchange is getting quite lively. Wujiu proffers the stick and says, “If you want this stick I will give it to you.” As Yuanwu says, “Wujiu dares to lie down in the tiger’s mouth.” The monk saunters over, takes the stick and hits Ukyû with it three times. Here is where the monk finally shows his mettle. Wujiu cries out, “Blind stick, blind stick!” The monk repeats Wujiu's own statement, saying, “There’s someone who should receive it.” Wujiu says, “I hit this fellow indiscriminately.” In other words, I didn’t realize that this monk was of such attainment and hit him rashly. Upon hearing this, the monk immediately bows. This is definitely not easy to do. Where there seems to be form, there is no form. Where there seems to be reasoning, there is no reasoning. The monk bows with complete freedom. Wujiu says, “So you go on in that way.” In other words: “So, is that your way of responding?” The monk laughs loudly. This laugh is also truly wonderful. When Wujiu says “Right, right” at the end of the exchange it is as if he is nodding his head in approval and muttering, “Mmm-hmm, okay.” And so ends the exchange. In this exchange we have an example of both delusion and enlightenment transcended. We meet “the person of infinite leisure who has finished all study and is beyond attainment.” Although the two of them are still slightly green, both have forgotten satori completely. They have become completely natural. Please savor this exchange for these qualities.

Rothenberg's Verse
No Reason to Hit
It's not easy, in words,
to tell shallow from deep,
and know who is guilty and who needs to suffer.
Be more than example,
logic is no joke.
There is one way in and one way out,
as host or guest, you welcome the challenge.
To gather is easy,
To disperse is hard.
Wood calls for termites,
mirages encircle the sea.
It has been our purpose
to pull out pegs, and loosen nails,
to set thoughts free and untie what is bound.
This lets people loose where there's nothing to hold.
The ancient shore crumbles,
the ocean dries up.
The mind is last to go.

Hotetsu's Verse
Sticky sticks are scripts:
The bit is in your mouth, directing your course.
Sticks washed of stickiness are playthings:
Total freedom is enacted before our eyes.
Posted by Meredith Garmon at 01:10