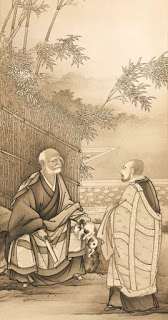 
Nanquan told the previous story[1] to Zhaozhou and asked his opinion.[2]
Zhaozhou then took off his sandals and, putting them on his head, went away.[3]
Nanquan said, "If you had been there, the cat would have been saved."[4]


Yuanwu:
[2] The must be of like hearts and like minds before this is possible. Only one on the same road would know.
[3] He does not avoid trailing mud and dripping water.
[4] Singing and clapping, they accompany each other; those who know the tune are few. He adds error to error.

Wansong:
[2] A second try isn't worth half a cent.
[3] Should cut in two with one sword for him.
[4] When the heart is crooked you don't realize the mouth is bent.

Loori:
[3] When struck, he reverberates immediately; when pushed over, he knows how to roll and come out upright.


Once the monks of the Eastern Hall and the Western Hall were disputing about a cat.
Nanquan, holding up the cat, said, "Monks, if you can say a word of Zen, I will spare the cat. If you cannot, I will kill it!"
No monk could answer.
Nanquan finally killed the cat.


He asked Zhaozhou to complete the koan.
The case completed, he consults Zhaozhou,
It was their lesiure time in Changan.
Freely roaming at leisure in the capital city


The good listener's indeed appreciative.
A connoisseur is to be lauded.
For cleaving the mountain to free the river only Yu is honored.
In tunneling through mountains to let the sea pass through,
only Great Yu is honored:
For smelting stone and mending heaven only Guonu is capable.
In smelting rock and mending the sky, only Guonu is considered best.
Old Zhaozhou has his own style --
Old Zhaozhou had a life:
putting sandals on the head is worth a little.
Wearing sandals on his head, he attains a bit.
Coming upon differences, he's still a luminous mirror,
Coming in differences, still clearly mirroring;
true gold does not mix with sand.
Only this real gold is not mixed with sand.


What is the meaning of Zhaozhou's putting his sandals on his head? If you can give a turning word concerning this matter, you will be able to see that Nanquan's command was not meaningless. But if you can't, look out! Danger!


Had Zhaozhou been there,
He would have given the command instead;
Had he snatched away the sword,
Even Nanquan would have begged for his life.


When Zhaozhou doffed his straw sandals, what state was this? I would remark, "Where there's no style is also stylish; for the moment he lets out a pathway for you." A lot of people try to figure out the part where Zhaozhou puts his sandals on his head, but would you not doubt if Zhaozhou had put on a bandanna and left? Or would you still doubt? In any case, without the eye on the forehead you cannot know this. "If you had been here..." Oh dear! Nanquan has the head of a dragon but the tail of a snake. Is it really so? Is there any saying whether he would have saved the cat or not?


Cutting the cat in two did not complete the koan; Zhaozhou's action supplied the finishing touch. Was Zhaozhou saying that he was no longer concerned with battling against self-centered thinking? Zhaozhou's action was performed as smoothly and naturally as water running in a stream. A certain thought must have been in Zhaozhou's mind, but it was a thought that came prior to reasoning, that is, an intuitive action. If we were to paraphrase it, we might say: When I was studying Zen there were many difficult and serious problems, but now that I have forgotten Zen, everything has become upside down.


Zhaozhou is able to settle the case. He listens to the story told by Nanquan, takes off his straw sandals, puts them on his head, and walks away. Nanquan approves. The active edges of teacher and disciple conform seamlessly. But what is Zhaozhou's meaning? How do you say a turning word that would save the cat? The turning points of these two adepts are subtle and profound. Leap free of the words if you really want to see into them.


Entering into the monastics' entanglements
The old master tried to cut open a trail for them.
Only Zhaozhou knew the path well --
Sandals on his head, a pure spring breeze followed him out.


Yasutani Roshi says: “Zhaozhou has forgotten everything, even forgetting about forgetting, and has attained great peace.” What is expressed here is how Zhaozhou has come to enlightenment, but then forgotten about that experience and its content, so that even Buddhism and the Buddha-Dharma do not remain. He has become a completely ordinary person who is completely at peace, and this action expresses that state of consciousness. It is then up to us to appreciate just how wonderful a response this is. Just what does Zhaozhou’s action mean? If you ask me, it has no meaning at all. In fact, if there were even the slightest meaning attached to it, it would already be “the difference between heaven and earth.” If you think that Zhaozhou was attempting to show with his action how he had forgotten satori and become ordinary, you would be mistaken. If there were the slightest trace of intention or trying in his action he would already have “lost his life.” It is JUST THIS. Just that action and nothing else. When we are taking a walk down a country road, for example, we will sometimes, with no particular thought as to what we are doing, pluck up a blade of grass or pull down a leaf from an overhanging tree branch. This is exactly what we have in today’s koan. Nevertheless, it would be better if he hadn’t done that! “The spirit turtle drags its tail.” A sea turtle will come up on the beach to lay its eggs in the sand, bury them and return to the ocean. In order to prevent the eggs from being found, the mother turtle uses her tail to brush away her footprints in the sand. The turtle is very clever, but the traces of her tail remain on the sand. Zhaozhou's action was truly wonderful but he too, after all, is a “spirit turtle dragging its tail.”


Is this mere stoicism on Zhaozhou's part? Does Zhaozhou's response mean we should close our hearts to the suffering of other beings? If you would think that Zhaozhou was divorcing himself from the screeching and scratching and splattering of the dying cat, you don't understand Zhaozhou's action, nor what it means to save the cat. Is he just playing the jester, implying Nanquan made a mess of things and got everything all upside-down. Zen practice is not about killing your compassionate heartfelt responses to life and its events. When things get uncomfortable, most people divert their attention by withdrawing, getting angry or depressed, or numbing themselves to their own feelings. That's not the Zen Way. Unless you open your heart, you cannot say a word to save the cat.


The Cat Could Have Lived

I took off my sandals, placed them on my head.
If you had been there, you could have saved the cat.
Of like hearts, like minds,
You two on the same road would know that.
You may murder the cat, it's none of my business
The sandals don't purr, and torn they won't scream.
If someone dies for them these puzzles matter.
You must try to care, if you wish to live.


Those monks swimming in mud,
Zhaozhou swimming in a clear brook, with the current --
How dear to me are they all!
Not by our efforts does the mud clear to pure water,
Nor without effort.

Posted by Meredith Garmon at 09:25