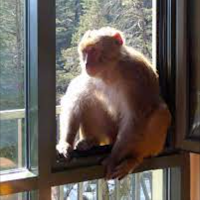 
Yangshan asked Zhongyi, "What does buddha-nature mean?"
Zhongyi said, "I will explain it for you by allegory. Suppose there is a room with six windows. Inside there is a monkey. Outside, someone shouts, 'Monkey! monkey!' It immediately responds. If someone calls, 'Monkey!' through any of the windows, it responds just the same. It is just like that."
Yangshan said, "How about when the monkey is asleep?"
Zhongyi descended from his Zen seat, grasped Yangshan and said, "O monkey, monkey, there you are!"


To be distant from the river, to fight with one's brains -- hiding one's self and concealing the soldiers. When you meet face to face, you both hold the real spear and the true sword. That is the reason for this praiseworthy complete functioning and great activity of accomplished Zen students. Go from looseness to tautness. Let's spit it out and see.


Freezing sleep in a snowy room, the year about ended;
The recondite ivy gate does not open at night.
Groves and forests withered in the cold -- look at the changing conditions:
The spring wind's blowing stirs the ashes in the pipe.


We each have six windows on the world: eyes, ears, nose, tongue, body, and mind. Zhongyi says, in the middle of the room -- which we can take to mean our body -- there's a monkey. What's that monkey doing? It is looking at bright, shiny objects all of the time, just as we get caught up looking at our bright, shiny ideas. What is this monkey? The monkey wants to be in charge. It controls you, at least what it thinks you are. It wants you to be safe, well fed with compliments, adulation. But the monkey has a limited perspective; it doesn't see the whole picture. When you hear, you just hear -- even when the monkey is asleep. When you see, you just see -- even when the monkey is asleep. Who are you wnen you're so totally absorbed in whatever it is that you're engaged in that you forget the self? Then what's the function of the monkey? Even when the monkey is asleep it can still function naturally and intuitively from the heart. When the six windows are forgotten, the true monkey appears everywhere and is enlightened by the ten thousand things.


Yangshan said, “How about when the monkey is asleep?” Yangshan says in effect, “Yes, I understand what you’re saying. But what about when the monkey is sleeping?” Up to then Zhongyi had been imagining that Yangshan was not very advanced in his practice, but when he hears this question, he realizes that Yangshan is quite a sharp cookie. Because true Buddha-nature does not move, it cannot come to a window. What are the six windows? These are our six senses of sight, hearing, smell, taste, sensation and will. It is not the eyes that see but rather that essential monkey inside. This is known as essential nature or the true self. This “self nature” is intrinsically without movement. When Yangshan poses his question about the sleeping monkey, it would appear that he knows about that true self that is always still, at least from viewing this question.

After the last snow
has departed
for the year
a thrush taps on the panes of glass.
It's wake up time
in the nursery
of fern shoots.

Posted by Meredith Garmon at 17:42