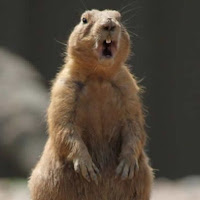 Have you ever had a moment in which, in a flash of insight, you realized the underlying fact of oneness?


Raven went to see Prairie Dog Roshi.
When she announced herself, Prairie Dog poked her head out of her burrow and blinked in the bright sunshine. Raven said, "I hear that Buddha Macaw looked up from the branch of her Jobo tree and saw the morning star and announced her realization. I get the feeling that something is missing from the story. I went to see Jackrabbit Roshi and asked him what happened when Buddha Macaw saw the morning star. Jackrabbit said, 'She realized the truth of mutually dependent arising.' What do you say? What happened when she saw the star?"
Prairie Dog crawled out and stood erect. She crossed her paws on her chest, scanned the horizon briefly, and said, "She realized the underlying fact of oneness."
"Well," thought Raven, "Prairie Dog Roshi seems to know her metaphysics, but maybe I'm not a metaphysician."


What really happens
When you see a star?
Easy to say oneness --
It's not a star.

Posted by Meredith Garmon at 09:49