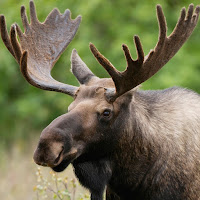 Is Moose Roshi dodging the question and changing the subject? Or was delicious waterweed precisely what happened when Buddha Macaw saw the morning star?


Raven went to see Moose Roshi.
She found him feeding on waterweed in the creek at Cedarford. Perching herself on a rock, she croaked for the Roshi's attention. When Moose looked up, Raven said, "I hear that Buddha Macaw looked up from the branch of her Jobo tree and saw the morning star and announced her realization. I get the feeling that something is missing from the story. I have been to see Jackrabbit Roshi and Prairie Dog Roshi. When I asked them what happened when Buddha Macaw saw the morning star, Jackrabbit said, 'She realized the truth of mutually dependent arising.' Prairie Dog said, 'She realized the underlying fact of oneness.' What do you say? What happened when she saw the star?"
Moose dipped his face in the creek again and came up munching. "Delicious waterweed," he said.
"Well," thought Raven, "that sounds more natural." She sat on the rock a moment, but Moose said nothing further and just went on feeding.
"OK," thought Raven, "maybe I'll come back, but for now I think I'll continue this pilgrimage."


The difference between mutually dependent arising and delicious waterweed?
Or between oneness and waterweed?
Standing on the doorstep
There is no difference to be found.

Posted by Meredith Garmon at 22:44