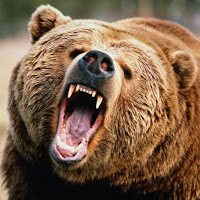 Have you had the experience of getting free of something by plunging in and being that very thing? Does your every croak reveal the fullness of stones and trees?

One evening after chanting sutras, Raven said, "Over at Jackrabbit Roshi's community, we were taught that we should be free from birth and death. I've never known how to go about this."
Brown Bear said, "That's because it isn't possible."
Raven said, "There was a clear implication that it is."
Brown Bear lunged at Raven with a horrific snarl.
Raven let out a croak and flew to a gray pine nearby.
Brown Bear looked up at her and asked, "What happened to make you croak?"
Raven hopped down to a lower perch and said, "I would rather ask the robin to explain."
Brown Bear sniffed and said, "Now the robin is taking over."
Raven said, "Only his beautiful song."
Brown Bear asked, "What happened to the stones and trees?"
Raven let out a croak.
Brown Bear asked, "Where did they go?"
Raven croaked and then croaked again.
Brown Bear nodded her big head slowly and showed her teeth at Raven. "The robin seems to have a bad cold this morning," she said finally, and both she and Raven laughed and laughed.

We croak.
Startled croaking, calculated croaking --
Is this birth or death?
What else is freedom?

Posted by Meredith Garmon at 12:21