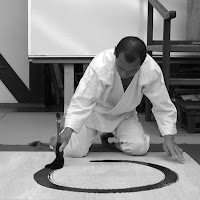 Case
Nanquan, Guizong, and Mayu set out together to pay their respects to the National Teacher, Nanyang Huizhong.
On their way Nanquan drew a circle on the ground and said, "If you can say something, then let's go farther."
Guizong seated himself [in zazen posture] in the circle.
Mayu made an informal bow.
Nanquan said, "If it is so, then let's not go any farther."
Guizong said, "What is this all about?"

Xuedou's Verse (Sekida trans)
Youchi's arrow shot the monkey;
How straight it flew,
Circling the tree.
Out of thousands, even tens of thousands,
How many have hit the mark?
Come, let us go home together.
No need to pay respects to Caoqi!
But again -- why not?
Isn't it a smooth road to Caoqi?

Xuedou's Verse (Cleary trans)
When an expert archer shoots a monkey,
Circling the tree, how very direct!
A thousand, ten thousand -- who has ever hit the mark?
Calling them together, he beckons them, "Come, let's go back,"
Stopping the climb on the road of Zen.
And yet I say, the road of Zen is level and even; why stop climbing?

Sekida's Comment
The use of the circle as a Zen symbol is said to have originated with National Teacher Nanyang Huizhong. The circle represents the universe, ultimate truth, Buddhism, and so on. Everybody is encircled in it; no one can get out of it. But in Zen you are supposed to embody it in yourself. Guizong's action, seating himself in the circle, must have seemed very fresh and original when he produced it. Guizong demonstrates his mastery of the circle, and Mayu paid his respects to the master. Nanquan then says "I will not go." Homage has already been paid to Nanyang Huizhong. There is no need to go to see him.

Rothenberg's Verse
Sitting Inside the Circle
There is no place to bite it.
He sat down in the circle and would not go on.
What's going on in his mind?
Call it awareness, and it's already changed.
One grips, one releases
one ends, one begins,
one life, one death
Shoot the monkey, circle the tree.
Who has ever hit a moving target.
Stop climbing and the peak won't be found.
Reach the top and see only more mountains.
The road does not end -- the earth is round.
Inside the world one sits still.
Dustless, trackless, naked and clean.
Such a path cannot help but beckon:
but each of you, please, watch your own steps.

Hotetsu's Verse
Say something? Not me.
"Then let's go back," I'd say
Shouldering my knapsack
And continuing toward the National Teacher.

Posted by Meredith Garmon at 09:02