67
Book of Serenity (Shoyoroku, Congrong Lu) #87
Shushan: Words of Being and Non-being 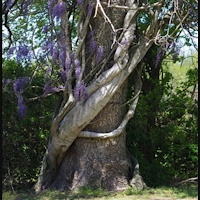 
Even if you want to shut the door, it opens with a little push.
When the door is about to close, with one push it opens;
Even if the ship is about to sink, it turns with a move of the pole.
when the boat is about to sink, one stroke of the oar and it turns.
The Shasô Valley leads into the canyon: there is no way to return;
The canyon enters the valley -- there's no way of return.
The Senkatsu Peak soars to heaven: [only] one hole is open.
The peaks cross the sky -- there is a gateway.
Just tell me, where does it go?


Shushan Kuangren came to Guishan Daan and asked, "I have heard that you said, 'Words of being and words of non-being are just like wisteria wound around a tree.' If suddenly the tree falls down and the wisteria withers, where will the words go?"
Guishan burst into great laughter.
Shushan said, "I sold my clothes and other belongings, and made an arduous journey of four thousand li* to come to you. [or: "I came four thousand li, selling cloth mats."] Why does Your Reverence make light of me?"
Guishan called his attendant and said, "Bring some money and give it to this reverend monk for his travel expenses." Finally he said, "Some day a one-eyed dragon will let you open your eyes."
Later Shushan went to Mingzhao and told him about this.
Mingzhao [who was blind in one eye] said, "I can say that Guishan is completely right, but he did not meet one who could appreciate him."
Shushan asked again, "If the tree falls down and the wisteria withers, where will the words go?"
Mingzhao said, "It would make Guishan laugh again all the more."
Upon hearing this, Shushan gained realization. Then he said, "From the beginning, there was a sword behind Guishan's laughter."


A vine withers, a tree falls, and Guishan is asked.
The vines die, the tree falls -- he asks Guishan
The great laugh -- Ahhaahhaa! -- is not to be made light of.
Big laughter, ha! ha! -- is it indeed casual?
Clearly see that within the laugh there is a sword.
In the laugh there is a sword -- he sees through it.
When words and thoughts are without a path,
schemes are extinguished.
Word and thought have no road -- gone are all machinations.

Later, he lived on Shushan (Mt. Shu), and it turned out as Xiangyan had predicted. After twenty-seven years his illness disappeared; he said to himself, "Xiangyan predicted that I'd vomit for thirty years. Now I'm three years short."
After every meal he'd stick his finger down his throat and vomit, to accord with Xiangyan's prediction.

When he was about to die, Shushan wrote the following poem:
My path is beyond the blue emptiness.
White clouds have no place to flow.
There is a tree without roots in the world,
The yellow leaves are sent back by the wind.


I'm not saying Shushan didn't have a particular strong point besides, but he broke the precepts, broke up the turning of the wheel of Teaching and broke the harmony of the community; this had to evoke manifest results: Xiangyan's prophecy and Shushan's forced vomiting to accord with the prophecy were both making examples for people of later times. Shushan was also an unfathomable man of high spiritual rank.


This koan appears as one of the Eight Difficult Koans of Hakuin Zenji.
“Words of being and words on non-being” -- Because there is being, there is non-being, and vice-versa. It is just like the wisteria winding around the tree. In like fashion, you cannot separate being and non-being from each other. The same holds for life and death. To say that the tree and the wisteria wither means to suddenly realize that the content is completely empty. It means realizing emptiness. It means realizing that subject and object are both empty. Shushan asks where such ideas as being and non-being, life and death, good and evil, right and wrong go at such a time.
Guishan's laughter was a sword cutting away all concepts. We are usually only aware of the world of phenomena. The natural world appears as an object of sensation. Although there is definitely that phenomenal world, from another standpoint it is completely empty. Moreover, the world of emptiness and the phenomenal world are completely one. If I use the example of my own hand, we can see the back of my hand as the phenomenal world. But when I open up my hand like this, we see the palm. That is the world of not one thing. I have a right hand and a left hand. To all appearances they are separate and two. But these two hands are living my same single life. We can say the same thing about everything in the universe. Guishan’s laughing is the whole universe. That laughing in the phenomenal world is, as it is, the entire universe. It exhausts the entire universe. Unless you understand that, you cannot understand this koan. The true reality is that the essential world and the phenomenal world are one.


Shushan made an arduous journey to question Guishan Daan: he walked four thousand li on foot. He had sewn and sold cushions to sustain himself along the way. He made this great pilgrimage because he had this question burning in his gut. When walking next door to see the neighbors we should have the same resolve as Shushan. Even though he was a high-maintenance and difficult rscal, Uncle Dwarf's mind always was on realizing the truth. Where is your mind when you go to visit the neighbors?
To be with or without words, still you're clinging to words. When everything you rely on, when everything you depend on falls away, then what? When your health, your means of financial support, your friends, and your family fall away, then what? When you've lost everything you hold dear, to where do you return? It's quite an important, serious question -- and Shushan has journeyed far to ask it. Yet Guishan just gives Shushan a hearty belly laugh! Guishan wasn't laughing at Shushan -- he was just laughing!
"From the first, Guishan's laughter had a sword!" Finally, Shushan saw not only the intent of Guishan's laughter, but the content of Guishan's laughter. That laugh was the very expression of what everything returns to when everything falls away.

Okay, you may think, that Shushan had his day,
and saw swords in the laughter that haunted his way,
but the lesson he learned, surprising to say?
– is that selling cloth mats is what’s really okay.


The great dark helium balloon
burst into a thousand starlings
that rose and fell
in wild, magnetic patterns
over the mangrove forest.
Between the aerial roots
laughter could be heard
carried in by the evening tide.

Words of being and non
Need a structure
To wrap themselves around,
To bloom purple, and seed.
The tree of the knowledge of good and evil, say,
Or, what might not be different,
The tree of the delusion of permanent separate essence,
Hosts the pretty parasite,
Supports and feeds its ontological categories.

And if that tree collapses?
Bwahahaha!