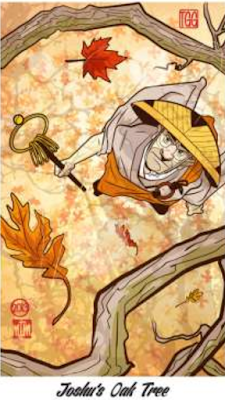 
The cypress tree in the garden. The flapping flag on the pole. As a blossom bespeaks the boundless spring, a drop bespeaks the ocean's water. The five-hundred-year-old Buddha clearly leaves the usual stream. Not falling into speech or thought, how do you express it?"


A monk asked Zhaozhou in all earnestness, "What is the meaning of the patriarch's coming from the West?"
Zhaozhou said, "The oak [or cypress] tree there in the garden."


If you see through Zhaozhou's response clearly, there is no Shakyamuni in the past, no Maitreya in the future.


Words do not express the fact,
Speech does not match the student;
Attached to words, one loses the reality,
Stagnating in phrases, one is deluded.


All trees wither and die in time,
But the cypress in Zhaozhou's yard flourishes forever.
Not only does it defy the frost, keeping its integrity;
It virtually sings with a clear voice to the light of the moon.


Only when really unusual do you recognize the unusual;
It is the eye of spirits that recognizes spirits.
People today don't know the living meaning of Zen;
They only see the green green cypress in the yard.


When the rain clears in the vast and endless sky,
The bright moon shines with a clear radiance.
Floating clouds cover up a thousand people's eyes;
Those who see the face on the moon are few and far between.


Zhaozhou's saying in this koan is a reflection of the suchness of being-as-is. The immediate moment of awareness of suchness is the Buddha of all time.


It is the very thereness of the tree that is at issue for Zhaozhou. His response is not unlike Van Gogh's irises or Cezanne's apples. To know the irises as Van Gogh knew them, or the apples as Cezanne knew them, one must be the irises, be the apples. In Zen it is said one should sit like an oak tree with its roots deep into the ground, its branches lost in the sky, immutable, whole. If one has done this one will have no difficulty with Zhaozhou's oak tree in the garden, and one will know the radical diference between thereness and overthereness. Zhaozhou's oak tree is everywhere.


The question 'Why did Bodhidharma come to China?' was the same expression as 'What is Zen?' Zhaozhou's response is obviously gentle, but it contains a secret power that can steal away all your delusions before you recognize it.


The questioning monk apparently presupposed that a holy, fundamental Truth like "the meaning of the Patriarch's coming from the West" must have very sacred, lofty, and profound significance. Master Zhaozhou saw through the monk's mind and tried to smash his bias. People usually think of hte Buddha mind in contrast to the ignorant mind, interpret objectivity as staning over against subjectivity, and understand the oak tree as a visible thing in front of them. Zen demands that we break through these fixed limitations and be reborn in the new world of quite another dimension. This answer, "the oak tree," was Zhaozhou's compassionate means to depreive his disciples of all their knowledge and intellect so that they would cast away all dualistic distinctions such as subject and object, I and you. He wished somehow to awaken them to the absolutely free and ever new Zen spirituality. When the whole universe is the oak tree, there is nothing that is not the oak tree -- or there is not even I-myself.


This expression of Zhaozhou's, the cypress tree in the garden, contains everything -- if you really see it. One cypress tree attests to the meaning of Bodhidharma coming from the west, to the ultimate meaning of Zen, to your true self before your parents were born. If you're attached anywhere to an external, objective tree, then it becomes the concrete world, the objective world. If there's an object, there is also a subject. The subject is our ego-grasping mind full of its concepts. We become attached to those concepts and ideas and then we become deluded. We begin to believe our thoughts, our ideas, and our images. If you see that there's no objectivity or subjectivity, then you'll see that the cypress tree in the garden is rooted in complete freedom.


Zhaozhou's Zen cuts off the myriad streams and stuns the mind. There is just no place to take hold of it. This cypress tree is not to be found in the world of phenomena, nor can it be found in the realm of emptiness. Then where shall we search for it? Putting aside the cypress tree, I ask you, what is the meaning of the Ancestor's coming from India? If you can clearly see into the monastic's question, you will see through Zhaozhou's response. If you think there's any meaning whatsoever, then you won't be able to save even yourself. If you say there is no meaning, you are still a hundred miles from the truth. What will you say?


Nothing whatsoever to say.
The pine trees singing in spring's warm breeze.
The ten thousand hymns of forest and wind fill the river valley.

Speaking of August,
fog. Astonishing how it moves
the cypress.
Below a faucet, winter grass.

Sometimes the paths are gold
and the hills are green.
Other times the sea is green
and the clouds are gold.
Small figures are riding horses,
carrying palanquins, rowing boats.
When an ox cart enters the courtyard
sparrows fly out of the cypress trees.


Down, down go the roots; out, out go the branches --
In the winter, standing bare; in the spring, clad in fresh leaves:
The reason and meaning of all that you ask.