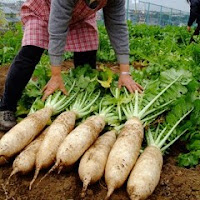 
A monastic asked Zhaozhou, "I have heard that you closely followed Nanquan. Is that true?"
Zhaozhou said, "Jin province produces a big radish."


Jin Province produces a big radish;
Monastics have taken it as their model.
They know only how it was and would be.
How can they truly realize
The swan is white, the crow black?
Plunderer! Plunderer!
The monastic had his nostrils threaded through.


Jin Province produces a giant radish;
Zennists everywhere take an example.
If you only know the perennial,
How can you distinguish the white of hte swan and the black of the crow?
Thief, thief -- he's snatched a Zennist's nostrils!


The monastic is testing Zhaozhou. The question implies that there is originally nothing to seek. Asking about something that is known, he plans to give him a beating if he says yes, and also give him a beating if he says no. He's trying to see Zhaozhou's level of skill. Does Zhaozhou's answer indicate he had followed Nanquan or that he had not followed Nanquan? He's a cold old priest -- there's no way to handle him.


This monastic was one with eyes. Aparently he was checking out the message personally communicated from Nanquan to Zhaozhou. "Jin province produces a big radish." What the heck is this? Here, if you speak of following or not following, this is already dualism.


That Zhaozhou had finished his Zen training under Nanquan and succeeded him was well known among Zen students of those days. But this monastic asks, "Is that true?" This was a Dharma batle. He was askingnot about historical fact but what Zhaozhou had got from Nanquan -- in other words, what Zhaozhou had attained. This was an unpleasant question. This monastic has an ax to grind. A clumsy answer might well have led to some kind of trouble. Jin province was a district nearby famous for producing fine big radishes. What did Zhaozhou mean by this answer? Had he been an Englishman, he might have said, "England has produced Shakespeare"; if an American, "America has produced Lincoln." In plain words, Zhaozhou was saying, "Like father, like son." But he gave the monastic nothing to take advantage of.


The question tries to test the master. Obviously he is not a commonplace fellow, but a monk of unusual caliber. What does the question mean? Does it simply express what it literally means? That's the point. Zhaozhou's reply is certainly absurd! What in the world is this trying to say? This is how I see it: Since Zhaozhou was a disciple of Nanquan, it seems more natural to take the question to mean, "You seem to have inherited the dharma of Nanquan." That is, the monk is actually asking: "What is the essence of Nanquan's dharma?" or "What is the essence of Nanquan himself?" If I can interpret the question this way, it's the same as asking about the fundamental meaning of Buddhism, the essential world: What is the ultimate essence of Buddhism, transmitted from one master to another? "Jin province produces a big radish." If, hearing this, you try to think even a bit with your head, you've already failed. If you try to figure out what the phrase means, you are off the mark. Try to utter, "Jin province produces a big radish." That's it! It flashes like lightning! At that very instant, you've got to see the essential world. If not, you can't meet Zhaozhou in person. To put it more directly: Here, Mu appears in the form of enormous radishes. "A big radish" is nothing but Mu. So: "What is the ultimate essence of Buddhism?" – "Mu...!" For those who are on the koan "the sound of one hand," it's the same as the "one hand." It's one and the same world. You must be able to naturally see that identical world. "That itself is IT"! Remember the saying, "If you stop and think, you deserve thirty blows." "Jin province produces a big radish." The moment you hear this utterance, you must spontaneously be able to witness the essential world; otherwise, you haven't passed the koan. In that sense, it could be seen as an unusually difficult koan.


Nanquan was great, but so is the radish of Jin Province.


Big Turnips
He's got his own road up through the skies.
His turnips are the biggest in the country!
But what has that got to do with anything?
Is the wheat beneath the mountain ripe yet or not?
If you so much as open your mouth, he'll snatch out your eyes.
If you know what's what, you'll chew your food, not gulp it down.
The swan is white, the crow is black,
that's not worth noticing, now, is it?
They did well to steal the eyes of travelers
Nothing's left of the body so no one can see.

Zhaozhou holds up his radishes
for everyone to see.
But look at the earth—
How it encrusts the white skin!
How it clings to the wispy roots!

I thought that I entered Zen
to attain the pure sky,
but each day I find myself
buried deeper underground.


Soil and tending and the grace of waters
Make a radish.
Conditions and conditions and the whole universe pouring through them --
Make one large radish.

Posted by Meredith Garmon at 21:04