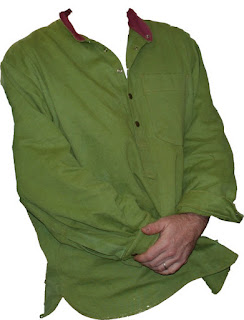 
If he wants to speak, he speaks, and none can rival him throughout the whole universe. When he wants to act, he acts, and his activity is peerless. The one is like shooting stars and flashing lightning, the other like crackling flames and flashing blades. When he sets up his forge to discipline his disciples, they lay down their arms and lose their tongues. I will give an example. See the case.


A monastic asked Zhaozhou, "All the Dharmas are reduced to oneness, but what is oneness reduced to?"[1]
Zhaozhou said, "When I was in Qingzhou, I made a hempen shirt. It weighed seven pounds."[2]


[1] He's pressing this old fellow. Piled in mountains, heaped up in ranges. He should avoid going to the ghost cave to make his living.
[2] After all Zhaozhou goes in all directions, drawing a net that fills the sky. But do you see Zhaozhou? He has picked up the nostrils of patchrobed monks.


You brought a piece of logic
To trap the old gimlet,
Wrapping it all up, he pressed the venerable old awl.
But do you know the meaning
Of the seven-pound hempen shirt?
How many know the weight of the seven-pound shirt?
Now I have thrown it away
Into Lake Seiko
Now it's cast into West Lake;
And sail before the wind.
Who will share the coolness with me?
With whom is the clear breeze of unburdening shared?


This monastic is one of those whose view is hardened at the point of radiant awareness; having a spot of satori, he took the Zen master to task with it. Yet that old Zhaozhou answered in a leisurely, relaxed manner. The shoulders would be terribly uncomfortable in a shirt so heavy. Do you consider this Buddhism? Do you consider it the Zen Way? Do you think it is the ultimate resort of the one? This is Zhaozhou's living tactic of turning freely beyond Buddhas and Zen masters where answer is impossible.


The Dharmas include all the sentient and insentient beings of the universe. The Gundavyuha Sutra says, "All things of the three realms are reduced to one mind." The Gundavyuha Sutra stops at one mind, but this monastic wanted to go further and tried to get Zhaozhou to answer his impossible question. There is, of course, no possible philosophical answer to the question, and the monk knew this quite well. He was hoping to trap Zhaozhou into saying something like "emptiness" or "nothingness." Zhaozhou, however, could not be caught out in this way. His answer resembles his answer in BCR #30: "Jin province produces a big radish." Qingzhao seems to have been famous for fine hemp. Many hands skillful craftsmanship would have contributed to the weaving the cloth and making the shirt. When Zhaozhou put on his hempen shirt, he experienced a keep sensation, which was a direct recognition of the shirt for what it was. Touching and feeling the shirt was pure cognition of it. There reality is. It is not that the Dharmas are reduced to oneness but that the Dharmas are oneness and are this seven pounds of hemp.


The monastic is closing in upon Zhaozhou with logical arguments. He seeks to corner Zhaozhou like a king in a chess game and call "checkmate!" He seems to have left Zhaozhou without any place to flee. How would you answer at such a time? You might try something like, "the one returns to the myriad phenomena." But this is logic-chopping. It is only thinking about the matter in logical terms. Zhaozhou doesn't answer with such logic-chopping. Instead, his reply is truly bold and imposing. Nevertheless, he no doubt said it in a low murmur as if it were nothing at all. He has presented us with the fact itself; we have "the one" right in front of us. Or it might be better to say we have the world where both the myriad phenomena and the one have completely disappeared. Zhaozhou has, without fanfare, presented us with the world where we are once again totally ordinary. Here is the true world of Zen. "You know, last year I had a robe made in Kyoto. They charged me 35 thousand yen for it!" Not until the satori is completely wiped away can one be considered truly outstanding. We are all intrinsically free-flowing water, water which flows pure and free and doesn't stagnate. Zhaozhou is really free-flowing water. For, like water, he is completely free while lacking any self-consciousness of his freedom.


The Seven Pound Shirt
The many return someday to one.
And what will the one become?
I once made a seven pound shirt.
It was also a silver mountain.
Or an iron wall.
Don't use objects to teach us.
I wrap everything up in the ancient garment
and toss it into the western lake.
Who will share my shivering bare in the wind?
Wrapped up, all my hopes are drawning toether --
You can only rest after you've won.


Advaita: Not two
Not One
Advaita resides in the bubble realm
A seductive illusion
Foam
Pop the bubble
Don’t imagine here is separate from there or there is
separate from here
Not Two
Not One either.


The touch my lover brings, breeze in the pines,
That email to answer, moon rising over a winter lake,
A bowl of oatmeal, the prick of a pin,
The fluttering fall of a red maple leaf,
My friend's sweater, a moment's fear,
The raising and lowering of the teacher's eyebrows,
Flowers among the grass, playground sounds,
"And the riverbank talks of the waters of March" --
Everywhere, oneness never stops reducing.

Posted by Meredith Garmon at 20:00