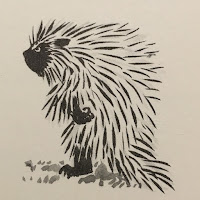 What's the difference between analogy and metaphor? Strictly speaking, analogy involves four elements -- A is to B as C is to D (e.g. "Raven is to bird as Porcupine is to mammal"). Metaphor involves two elements: X is Y. So analogy compares a relationship (the relationship of A to B) to another relationship (the relationship of C to D), and metaphor compares two things (X and Y). But since X and Y might be names of relationships, this way of distinguishing analogy and metaphor can get fuzzy. Another way of distinguishing them is: analogy is a rational argument that two apparently dissimilar things are similar, while metaphor is a figure of speech (poetic). The rational/literal vs. poetic might be what Raven has in mind.
NOTE: "What is Mu?" derives from the story that Master Zhaozhou was asked, "Has a dog Buddha nature?" and replied "Mu."


Your inheritance of joy and compassion,
What estranges you from it?
Every wave does, every ripple.
Your nest of understanding and love,
What gives it away?
Every ripple does, every wave.
The still water becomes clear,
Clear, clear down to the bottom.

Posted by Meredith Garmon at 06:41