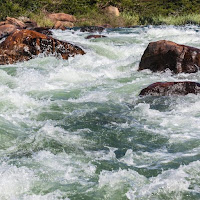 
The question: the six senses. Purposeless.
Inactivation of the six consciousnesses presents a question:
Well acquainted with it, the masters.
The adepts both discerned where it comes from.
A ball is thrown into the rapids;
A ball tossed on boundless rushing water --
Do you know where it is carried?
It doesn't stay where it lands; who can watch?


Although none of the examples in the Blue Cliff Record are fatuous, this one is particularly outstanding, so even the ancients over the generations have mispercieved it. Xuedou used his truth-discerning eye to select this one from among the seventeen hundred koans; it lets us know how incomparably Zhaozhou and Touzi penetrated the depths. With this example, you'll have to give up your religioun. This monk was a scary guy who tried to catch Zhaozhou. Zhaozhou's answer, "a ball tossed on rushing water," is amazing and swifter than a spark. That's because he has a lot of breasts producing sweet and sour at will. There is no explanation for this; it cannot be praised enough; it is verbal samadhi. Touzi's answer, "moment-to-moment nonstop flow," is also amazing. Is there subtle inconceivable spiritual joy and meditative delight in this?


This monk misconstrues the state of the mindless wayfarer, comparing it to that of a newborn infant. This monk thinks that mindlessness means the ears are as though deaf, the eyes are as though blind, the six senses and six sense fields are cut off, and one becomes like a stone Buddha, as if one had burrowed into a hole. Anyway, concluding that it means annihilating the mind, he asks if the six consciousnesses are still there or what. Zhaozhou says it is like a ball tossed on fast-flowing water. See how it flows right away, no one knows where. Focus quickly! Is there any creation, maintenance, change, and destruction taking place herein? Are there any comings and goings of the six consciousnesses taking place herein? Is it something that comes into being or passes away? Is it something that begins or ends? Is there good in it? Is there evil in it? Open your eyes and look directly. What is it that is seeing right now? Take a look. This is Zhaozhou's underlying meaning.


That ball will not stop in the place where it was thrown. It will move relentlessly with the current. Surely there is nobody who does not know that. And so, too, life flows on from instant to instant, from thought to thought, and there is nobody in the world who can foresee or ascertain its destination.


Nen: either a unit of thought or a steadily willed activity of mind. The first nen always acts intuitively and performs a direct, pure cognition of the object. The second nen immediately follows the first and makes the first its object of reflection. The integrating, synthesizing action of consciousness is the third nen. Reasoning, introspection, and so forth come from the third nen. But this third nen, clouded by its ego-centered activity, often argues falsely and draws mistaken conclusions.
In Buddhist psychology the six senses are seeing, hearing, touching, smelling, and tasting together with the activity of consciousness. "It is like throwing a ball into the rapids." Moment after moment, the ball floats on with the stream. It has no time to stop and reflect upon itself. It corresponds to the action of the first nen. A newborn baby's senses may not yet be fully developed, but such as they are, they are pure, not yet overlaid by the delusive activity of consciousness as in an adult. The baby is capable of pure cognition, though that cognition is not fully developed. Full-fledged pure cognition is achieved by the practice of zazen, in which the delusive action of the third nen is cast off.
Nen follows nen, each passing away moment by moment. In ancient times, before scientific research had begun, this knowledge could be attained only through Zen practice, in which the different sorts of nen-actions are clearly perceived.


A Newborn Baby
Is a newborn baby able to see?
Like throwing a ball onto swift-running water
Even a kingfisher cannot impale it.
Whose baby is he talking about?
Mountains still mountains, rivers always rivers.
He blurs all senses to one.
He uses no tools.
He covers everything deft as the sky.
He moves like the sun and the moon, never stopping.
In the midst of a stagnant haze, he is able to act.
Moment to moment, unstoppable flow.
If I call baby the path, you would misconstrue;
Consistently babbling from beginning to end.
Drifting away, you'll grow up blind.


There's a babe inside the adult,
Overlaid with learning, skills, delusions.
There's no going back, and what is going forward?
This, then this, then this . . . Watch and see!
"Not by your will is the house carried through the night."

Posted by Meredith Garmon at 17:09