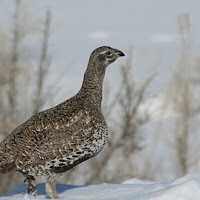 Grouse has been bumming a bit -- feeling kind of down on herself. Raven is her teacher, but that doesn't mean Raven is always helpful. Sometimes not being helpful is itself the perfect teaching. Yeah. And sometimes not.


Grouse was looking rather moody one evening, and as the group was breaking up at the end of the meeting, Raven called to her, "Hey, Grouse! How's it going?"
"Oh," said Grouse, "I don't know. Sometimes I feel discouraged. Why is it that I'm taking so long to understand anything?"
Raven said, "Everybody takes the same length of time."
"There are folks who came after I did," said Grouse, shaking her head. "They ask intelligent questions and seem to be moving along in their practice while I just sit and sit and wonder what is going on."
Raven said, "They say the Buddha Macaw is still sitting somewhere and she's only halfway."
Grouse said, "That's not very encouraging."
Raven said, "Come to think of it, it's not."


Breath in, breath out.
Blood out arteries, back in veins.
Food in, poop out.
Sun rises, and sets.
Winter to summer to winter.
Births, and deaths.
Mountains rise, wash away.
Did you think all of this was going somewhere?
Did you think there was anywhere for it to go?

Posted by Meredith Garmon at 17:19