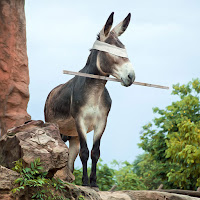 
Devoted entirely to others, oneself is unknown. Straightaway eliminating Dharmas, you shouldn't be bothered by there being no one. Mean treatment, like breaking a wooden pillow, should be used. What about when it's time to depart?


At midnight the robe of faith's transmitted to No of Ro (Huineng):
The robe of faith is imparted at midnight to Huineng,
seven hundred upset monks on Yellow Plum Mountain (Huineng's monastery)!
Stirring up the seven hundred monks at Huangmei.
The True Dharma Eye of Linji's limb;
The eye of truth of the branch of Linji --
the blind ass extinguished it and people despised him.
The blind ass, destroying it, gets the hatred of others.
Mind and mind together sealed --
Mind to mind they seal each other;
Ancestor to Ancestor transmitting the lamp.
Patriarch to patriarch they pass on the lamp,
Seas and mountains being leveled,
Leveling oceans and mountains,
a giant fish becomes a phoenix.
Magically producing a roc:
It's just that such splendid words are hard to compare with;
Just the name and word is hard to compare --
any time as a device he can metamorphose.
In sum, the method is knowing how to fly.


In reality this thing does not increase even though a thousand buddhas appear in the world, nor does it decrease when a thousand sges pass away -- how could one Sansheng be able to cause it to prosper or die out? Sansheng came out and said, "How dare I destroy the teacher's treasury of the eye of truth?" The treasury of the eye of truth has not become extinct. Linji asks further, and Sansheng shouted. In high antiquity and later times, since Baizhang was deafened for three days by Mazu's shout, none have compared to this shout of Sansheng.


In the Zen tradition, the first instance of Dharma transmission was when Shakyamuni Buddha said, "I have the all-pervading True Dharma Eye. Now I give it to Mahakashyapa" -- and thereby acknowledged Mahakashyapa as his successor. The True Dharma Eye is the reality of what is -- but as soon as you think about it, it's something else. The True Dharma Eye is unborn and undying, and cannot be extinguished.
Master Linji died young, at the age of fifty-five, but the school he founded continues to thrive. His Dharma has been transmitted through the generations to this day. This is another sense in which the True Dharma Eye has not been extinguished. Transmission in Zen does not rely on letters but is transmitted outside the scriptures, from teacher to student, because the experiential fact of the truth does not belong to the realm of logic and intellect (though it does not exclude it either). Because the transmission is always from teacher to student, there can be no self-proclaimed masters in Zen. Each generation vows to his or her teacher to not let his or her True Dharma Eye be extinguished.
Linji is not criticizing Sansheng by calling him a blind donkey, but in fact this is very high praise indeed. Here, to be "blind" means to manifest the state of "no eye" -- the state the Heart Sutra describes as "no eye, no ear, no nose, no tongue, no body, no mind." When you manifest that state, there is no separation between you, the act of seeing, and the object seen. Not deceived by intellectual conundrums, delusions, knowledge, preoccupation, and attachments the blind donkey is a liberated person who maintains the heart of not-knowing, not seeing. Sansheng says, "How could I let it be extinguished?" But tell me: How would you extinguish something that's unborn and undying?


Linji's "Blind Ass"
The tools of the trade passed on
Eye to Eye
Warm hand to warm hand
In this lineage
we shout, dance, and slap
when the cup is full
We empty it
The treasury of the eye of truth is not to be
destroyed
Or taken for granted.


Seeing his death appearing, Linji wants to confirm his senior disciple Sansheng as his successor. He says, "After I pass away, do not allow my treasury of the true dharma eye to perish." Since this is a matter that has never advanced nor declined in countless aeons, even before and after the appearance of the buddhas and the ancestors, why does he make such a request?
Sansheng understands his teacher and shows his own provisions. Still, not satisfied that the matter has been settled, the master presses further: "Later, when someone asks about my teaching, how will you answer them?" Sansheng shouts. Linji has no choice but to respond to the imperative: "Who would think that my treasury of the true dharma eye would perish with this blind ass?" But say, what is Linji's intent in saying this? Did his treasury of the true dharma eye perish or not?


Eyeball to eyeball,
each confirms the other.
Passing from mouth to ear, it perishes;
pasing from ear to mouth, it is born anew.


At that unexpected shout
the light bulb cracked
and flakes of plaster
fell from the ceiling.
Now the whiskey drinkers
rub the stubble on their chins
and eyeball each other
over their empty glasses.


I think of praying: "dear God, when my time is nigh, let me enter
that good night as Linji did:
teaching with my last breath,
learning with my last awareness."
But never mind.
Linji's dying words granted that prayer long ago
And laid bare our imperishable treasury of the true dharma eye.

Posted by Meredith Garmon at 18:18