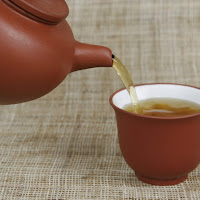 
An examining cane in hand, with a duckweed cover around him;
Sometimes wrapping a cotton ball in iron, sometimes a hard stone in brocade.
To overwhelm the soft by hard means is a matter of course;
How is it if you are weak when meeting a strong one?


Attendant Huo asked Deshan, “Where have all the past saints gone?”
Deshan said, “What? What?”
Huo said, “I gave the command for an excellent horse like a flying dragon to spring forth, but there came out only a lame tortoise.”
Deshan was silent.
The next day, when Deshan came out of the bath, Huo served him tea.
Deshan passed his hand gently over Huo's back.
Huo said, “This old fellow has gotten a glimpse for the first time.”
Again, Deshan was silent.


When you come face to face, the adept knows;
Coming right up face to face, an adept knows;
that moment is quicker than flint sparks or lightning flash.
Here, sparks and lightning are slow.
The master strategist seeming to lose has profound intent;
The plotter who lost the moment has a deep intent --
the militarist who underestimates his enemy lacks deep reflection.
To fool the enemy army into not thinking ahead.
Every shot hits -- how could this be slighted!
Each shot a sure hit,
Who's fooled any more?
He whose jawbones can be seen from behind is hard to touch;
When you see jowls from behind his head, the man is hard to run afoul of;
with eyes set deep beneath his brows, he is a nouveau riche.
Setting his eyes under his eyebrows, he got the advantage.


In ancient times, as seven wise women were traveling through a forest strewn with corpses, one woman said, "Here are the corpses -- where are the people?"
Another woman said, "What? What?"
The women looked around at each other and all suddenly realized enlightenment and felt the king of gods showering flowers in offering to them.


Deshan keeps deaf and plays dumb, but even so, he gets the advantage unseen. Mr. Huo covered his ears to steal the bell -- what can be done for the unseemliness of the onlooker?


If you don't go up to the Dragon Gate, how can you know the vastness of the blue sea? Even if the waves crash a thousand fathoms, neverthless a dragon pays no notice.


Deshan really had ruthless hands and feet, but he saw that this monk was not a man to accept the hammer, so he stopped right away.


Deshan usually thrashed the wind and beat the rain, hollering at the buddhas and reviling the patriarchs; this monk's errors filled the sky -- why did Deshan let him go? What is hardly recognized is that Deshan wrestled down oxen without using rope, killed people without using a sword -- how many has he ever let go?
The ancients each had techniques meeting people in accordance with the situation. Deshan said to Yantou, "You will shit on my head some day." Later Yantou said, "Even the great Deshan does not understand the last word." The ancients censured and extolled, letting go and holding back -- how could they be involved in gain and loss, victory and defeat?
If suddenly someone should ask me where the sages have gone, I'd slap him on the jaw and say, "They're here!" Even if Flying Dragon and Lame Tortoise draw in their heads and hoofs, and the attendant and Deshan lose their points and become tongue-tied, do you yet know the old fellow Deshan? As a young man he used to determine the arrays of dragons and snakes; grown senile, now he listens to a child's song.


What is the best way for a teacher to teach? How we react to a situation always depends upon conditions: the time, the place, the people involved, and the intensity of the relationships and the situation. There isn't some kind of absolute response that we can apply identically in every situation. Sometimes you wield the stick; sometimes you back off. Sometimes you retreat; sometimes you go forward. But we must understand that whatever we do affects everyone else. So how can we respond appropriately to each situation? How can we react in a way that's most effective? Huo was not one to accept the stick easily. Sometimes a tough word from the teacher that drives a rigid student away is the correct action. Each student is different, so the teacher tries to met each student in the place where he or she can benefit most from the teaching. Also, the student must meet the teacher where he or she is. When Huo asks where the holy ones went, he's saying, "Wherever the holy ones went, that is where I am going! That's where I am!" Deshan's answer -- "What? What?" -- should give Huo a clue. Instead Huo insults Deshan, and Deshan desists. Then when Huo brings Deshan tea the next day, Deshan pats him on the shoulder. He's showing Huo the answer to his question. Huo makes a remark and Deshan again lets it pass. Every time this attendant tries to grab onto something to aggrandize himself, Deshan gives him nothing to hold onto. Deshan was like a grandfather who lets his grandchild be just as he is, even if the child is playing in the mud. Eventually the child will want to get out of the mud and be clean.

Playing the fool in a blood bowl . . .
Does he really think It comes and goes?
The standard fine is a broken nose,
But even that would be unearned praise.
There is a mountain of virtue in restraint,
Teaching an unruly child. One light pat . . .
Then the old assassin lets it rest.
Tell Huo to check his back
Before puffing out his chest.

Lying on her back
in the great ocean
she raises her legs
and walks across the sky.
Friends on the shore
try to attract her attention
with all sorts of antics,
but she's there and not there.

"Where have all the past saints gone?"
A finch song, a broken cup
A harsh word, the pang of being judged
The vast sky and the unanswerable green of the fern,
Brooks, roads, subway cars, scents of flowers, of garbage,
All of it, each of it, complete,
Quietly displays all that ever was or will be
Brings our noble ancestors so fully and plainly before my face --
So present --
That for a moment I wonder at their absence.