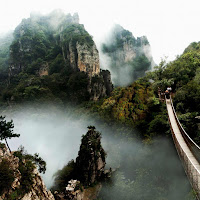 
Yangshan asked a monk, "Where have you come from?"
The monk said, "From Mount Lu." [a beautiful and famous mountain in the southern part of China with many Zen monasteries]
Yanshan said, "Have you been to the Goroho Peak?" [i.e., Five Elder Peak, the most noted peak of Mt. Lu]
The monk said, "No, I have never been there."
Yanshan said, "Then you have never been to the mountains at all!"
Yunmen said, "Because of too much compassion these words have fallen into grasses."


Falling or not falling, who can tell?
Out of the weeds, into the weeds -- who knows how to search?
White clouds piling up,
Bright sun shining down,
The white clouds pile in layers, the red sun is clear and bright.
Faultless the left, mature the right.
Looking to the left, no flaws; looking to the right, already old.

Don't you know Hanshan?
He went very fast;
Haven't you read of the Cold Mountain man, who went early on--
Ten years not returning,
He forgot the way he had come.
Ten years he couldn't return, finally forgot the road on which he came.


This is my resting place,
Hanshan knows the best retreats;
The breeze blows through the pines,
Sounding better the nearer it is.
Under a tree I'm reading
Laozi, quietly perusing.
Ten years not returning.
I forgot the way I had come.


Guishan one day asked Yangshan, "When there are monks coming from various places, what do you use to test them?"
Yangshan said, "I have a way of testing."
Guishan said, "Try to show me."
Yangshan said, "Whenever I see a monk coming, I just lift up my whisk and say to him, 'Do they have this in other places?' When he has something to say, I just say to him, 'Leaving this aside for the moment, what about That?'"
Guishan said, "This has been the tooth and nail of our sect since time immemorial."


The point of testing someone is to know him intimately as soon as he opens his mouth. An Ancient said, "Immeasurably great people are turned about in the stream of speech." If you are one who has the eye on your forehead, as soon as it is being brought up, you immediately know where it comes down. "Did you ever get to Five Elders Peak?" If that monk had been a person of substance, he would simply have said, "A disaster."


This example is a difficult case with a number of significant details. "Where have you just come from?" This is an ordinary question, but if you therefore think it's the usual, you're mistaken. "I never got there." He doesn't even reveal his shadow. "You never traveled the mountain." Among the outward manifestations of the Guiyang school of Zen, the ancients appreciated this saying. That is why Yunmen made such a remark, leaking quite a bit; even the canes of Linji and Deshan cannot match. Why is there such significance in it? You must make the effort to see for yourself -- explanation by pictures won't work. "This talk was all for compassion." Yunmen drips blood; how can any comment about going into the weeds or getting out of the weeds be inserted? "A conversation in the weeds" means he came down to a secondary level of potential to speak.


"Where have you come from?" The point is, right now what place is this? Check and find out where you are. The monk said he had never been to Goroho Peak; unfortunately he missed what was right in from of him; apparently he didn't hear. He didn't realize it's the great matter right at his feet. "Been to the mountains" means passing through formal Buddhism and no longer establishing views of Buddha or views of Dharma. There is no such thing as roaming the mountains and enjoying the rivers in the context of formal Buddhism. As for Yunmen's remark, this is known as his method of lifting up and putting down, where one can censure and praise independently according to the situation.


Yangshan implies that it would have been much better to have gone to see the beauties of nature at Goroho Peak than to go round from temple to temple merely asking sophistical questions. Yangshan urged the climbing of Goroho Peak because he believed that the wonderful cloud effects, the glorious sunlight, the perfect view in whatever direction one looked from there, would inspire the viewer with a deep knowledge of the Buddha nature and the very heart of Dharma. It was on this very mountain that the famous hermit Hanshan took up his abode so as to be near the absolute Truth. Unfortunately he was traced there by somebody. Hanshan fled still farther into the hills and disappeared into the mountains with great haste and has never come back. No doubt he forgot the way back, for he was swallowed up in the beauty of those hills.


"From Mount Lu." The monk associates himself with something spiritual and refined. "Goroho Peak? is the most famous part of Mount Lu. Yangshan's question was aimed at discovering if the monk had attained a true, subtle insight into Zen. "You have never been to the mountains at all!" With these words Yangshan dealt the monk a decisive blow. A more severe master, such as Deshan or Linji, would have used his stick on the monk. However, a gentle word can sometimes be more telling in its effect than a blow. Yangshan is a mature Zen master who, like Hanshan in Xuedou's verse, has gone into the world of unworldliness and forgotten the way back to the world of worldliness.


"No, I have never been there." It would not be the least bit strange for either an enlightened person or an unenlightened person to answer like this. He's simply stating the facts. But a true master, observing the monk, knows whether he is just talking about ordinary affairs or, having attained kensho, he is talking from the viewpoint of the essential world. The master may not know right away but, as the exchange goes on, he knows. "Then you have never wandered in the mountains at all!" Yangshan is saying in effect: "You say that you have come from Mount Lu, but you don't understand anything at all about the real pleasure of wandering in the mountains." There is no record in the koan of what the monk said in reply, but he probably could not attain realization at this point.


Come Down from the Mountains

Where have you just come from?
The mountains.
By the tone of your voice, I am sure
You never found the right peak at all.

Though everyone in the world is the same,
it is still appropriate to ask;
If you want to know the mountain road,
you must be the one who travels it.

You learn the truth of someone by testing their speech.
Not even a fly will get past your scrutiny.
Why try so hard to be clever?

No single hair common,
no single strand sacred.
The whole earth has never concealed it.
No particular ever reveals it.


There are peaks and there are valleys
But it is all the peak.
Even so, it is, at the same time,
A big mistake.

Posted by Meredith Garmon at 19:59