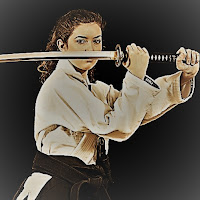 
The emperor’s decree inside the land of his direct control;
The general’s command outside the walled regions.
Sometimes one gets power at the gate;
Sometimes one is sublime in the room.
Just tell me, who is this?


A monk asked Jiashan, “What if one sweeps away the dust and sees Buddha?”
Jiashan said, “You must brandish your sword. If you do not brandish your sword, the fisherman dwells in a nest of reeds [i.e., unable to catch a single fish].”
The monk mentioned this to Shishuang Qingzhu and asked him, “What if one sweeps away the dust and sees Buddha?”
Shishuang said, “He has no land [i.e., no country, no realm, to dwell in]. Where could one meet him?”
The monk reported this to Jiashan.
Jiashan ascended the rostrum and said, “As for the facilities at the gate [concrete teaching means and devices in Zen], the old monk [i.e., "I"] is superior to Shishuang, but for deep discourse expounding the true principle he is one hundred steps ahead of me.”


A sword's spirit drives out the bull.
The heavens are washing the soldiers.
The star-brushing sword, the army-washing weather.
To achieve the quelling of a riot: Who is he?
Settling disorder, deferring the merit, who else is it?
Once, there were battle clouds, the four seas were clear.
One morning the haze of dust clears over the four seas:
With flowing robes, the emperor's governing is naturally effortless.
Robes hanging down, the imperial rule is naturally effortless


Shishuang was at Guishan, where he served as the rice maker. Just as he was sifting rice, Guishan said, "Gifts from donors should not be thrown away."
Shishuang said, "I'm not throwing it away."
Guishan picked up a grain of rice off the floor and said, "you said you aren't throwing it away -- where did this come from?"
Shishuang had no reply.
Guishan said, "Don't take this one grain lightly -- hundred of thousands of grains come from this one grain."
Shishuang said, "Then were does this one grain come from?"
Guishan laughed and returned to his room. That evening he went up in the hall and said, "People, there's an insect in the rice!"


After leaving Guishan, Shishuang studied with Daowu, and asked about enlightenment that meets the eyes. Daowu called to a novice to add water to the pitcher.


In profound talk of the principle, Shishuang is better. In setting up method, Jiashan is ahead. Is there no one with two faces on one die?


Jiashan and Shishuang were asked the same question: When I get rid of all the confusion in my own mind and wisdom manifests, then what? Jiashan says essentially: "Cut that out. You're getting things all confused. Keep things in order, like Wansong's Preface says: emperor rules in the castle and the general commands in the field. What's the Buddha doing in your mind? Is that his seat?" One way to practice is cutting it off -- "hold your mind against incoming thoughts like a great iron wall." In the long run, letting it pass through is better than cutting it off. You can sit like a vast ocean letting everything in. The ocean accepts everything. If your energy channels are all open, delusive thoughts will pass through. To let them go, we have to illuminate our hidden beliefs that sustain our arrogance, anger, hatred, laziness, indifference, self-pity. Just let go of all your opinions, and the Buddha appears -- but Jiashan says, "Don't hold onto it."
Shishuang says, "Where would you meet the Buddha?" She has no name, no country, no gender, no occupation, no rank, no sword, no mother, no father, no lover. She doesn't even have a face. If you say all the dust has been swept, what about that new dust ball you're creating that you call Buddha? You can't depend on it.
As Jiashan then says, he has given the practical expedient (brandish the sword, cut through your image of Buddha), while Shishuang expounds the principle of emptiness, including the emptiness of Buddha ("He has no land.")
There are numerous paths to enter the way of Zen. Even Bodhidharma talked about entering by method or entering by principle. Either way, drop off attachment to your own thoughts, ideas, judgments, and opinions.

Respecting our ancestors, respecting others,
For this case, Aitken-roshi’s cautions, for all the Whole Works.
In times of warlords, obeying Jiashan, swords remaining buried,
With Guishan, Shishuang, Shunryu, and Trudy, practicing every day
new with rice and insects, going out the gate, already it’s grass.

A cloud of words
is just that --
a cloud of words.
Looking around
for a suitable rock
to drive in the tent pegs,
dust has settled
on the burnished plain.


No dust! Clear Buddha!
But the mind soon makes dustless clarity into "dustless clarity."
With Jiashan's sword, cut off those marks --
Or, with Shishuang's understanding, unhook them.
Fly, you fish. Swim, you birds.