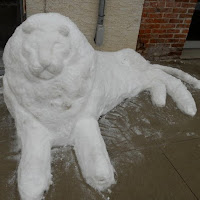 
Ice and frost are one color; snow and moon mingle their light.
It freezes the Dharma-body to death, and ruins Gyoho through purity.
Is there anyone who wants to extol such a thing or not?


Yangshan pointed to the snow lion [probably a lion made of snow or a stone lion covered with snow] and said, “Is there any [i.e., “anything” or “anyone”] that goes beyond this color [i.e., the white]?”
Yunmen [commenting later] said, “I would have pushed it over for him at once.”
Xuedou [commenting later still] said, “He [Yunmen] only knows how to push it over, but he doesn't know how to help it up.”


A pushing down, a raising up -- the lion in the snowy garden.
One knocks down, one sets up -- the lion in the snowy garden.
Restraining offenses, embrace virtue; acting with bravery, behold righteousness.
Careful about transgression, he [Yangshan] embosoms benevolence.
Courageous in action, he [Yunmen & Xuedou] sees his duty.
Though pure light illumines the eye, it's like being lost from home
Pure light shining in the eyes is like being lost from home --
Though clarity turns the body, it falls into a rank.
Turning around in clear purity is after all to fall into that state.
We Zen students have nothing to rely on!
Patchrobed mendicants ultimately have nothing to rely on.
The same life, the same death -- which of them is best?
Dying the same, born the same, which is 'this,' which 'that'?
Warm tidings bursting the plum buds, spring comes to the icy branches
News of warmth bursts the plum -- spring comes to the cold branches.
A chill blast drops the leaves, fall clarifies the water puddles.
A freezing gale makes the leaves drop -- autumn clarifies the runoff water.


Uniform, none surpassing, he shows it to people,
Stretching in a world of white silver.
Aloof, they push down and then raise up,
But how can that compare to the freshness of the spring breeze and warm sun?


Now white is the basis of all colors, and the color of snow is sheer white -- how can there be any going beyond this? The color that goes beyond white is only the colorless. If you then grasp the point of ultimate blankness, where there isn't even white, this indeed is falling into the formless realm. Yunmen knocks down, Xuedou sets up; Yangshan points to the lion and wants us to transcend this color -- three legs of the pot, it won't do to lack any of them.


The Lotus Sutra says, "Pure, uniform, unmixed plainness is the character of pure conduct." Pure, uniform, unmixed plainness is like the taste of water or the color white. But what's beyond white? What is the source of white? Truly going beyond the color white is not an image. How can we go beyond images? How do we go beyond our narrow views? We may think that we should be loving and compassionate and then we create an image "loving and compassionate." In zazen, eventually you'll see certain patterns of behavior, certain routine ways that you do things, that don't particularly lead to peace and comfort. And when you see that pattern, just observe that. You don't have to change it; the process of observing will itself cause a certain shift. When you discipline your ind, you sense the arising of thoughts and can allow your body and your mind to naturally return to their original resting place. That is the place beyond the color white.
Keep getting in touch with that place.


The perfect white is the world of satori, the world of emptiness. Yunmen said, “I would have pushed it over for him at once.” He is presenting the world in which emptiness has been transcended. This is his way of responding to Yangshan's question of whether anyone can surpass that color. The whole universe is no other than you yourself. You and the universe are one. Unless we return to the ordinary world, it will not be the real thing. As long as there is that color white, there is something before your eyes. There is still that division between the color outside and the eyes. If you transcend that, there is no color. If there is no color it is transparent. But it will not do to remain in that transparent place. You must upend that transparency. If we continue on in our practice, we rid ourselves of different “colors” in the form of concepts until there is only white -- or colorlessness. So, having once ascended to the pinnacle, we must once again descend to the phenomenal world. Otherwise we cannot save sentient beings. Having realized the world of satori for the first time, we tend to want to stick to it and have trouble getting free of it. This entire koan is telling us that such an attitude will not do. It’s certainly difficult, but we have to do it.

A cloud penis enters
a cloud vagina.
For those who desire
the pure empty sky
it's a disappointment.
Showers are forecast.
The old woman from Tinopai
walks across the mudflats.