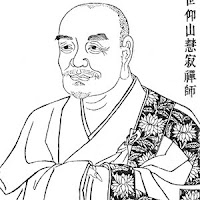 
The ocean is the world of the dragon – freely it appears, freely it disappears;
The sky is the home of the crane – at ease it flies, at will it calls.
Why does the foolish fish stay in a basin and the dull bird dwell among the reeds?
How should you figure gains and losses?


Embrace without separation, fly without impediment.
All-embracing with no outside;
Penetrating with no obstruction.
Gate and fence tower high; barrier and chain weigh heavy.
Gates and walls like cliffs
Doors and locks redoubled.
When drinking is abundant, the guests go to sleep.
When the wine is always sweet, it lays out the guests;
When bellies are full, the farmer is destitute.
Though the meal is filling, it ruins the farmers.
Shooting in the vast sky, the wind flaps the Garuda bird's wings.
Bursting out of the clear sky, the garuda takes wing on the wind;
Stamping the waves in the blue sea, thunder sends off the sporting dragon.
Treading over the blue sea, thunder follows the roaming dragon.

"Yangshan, because of his kindness and compassion, had a conversation in the weeds." -Yunmen

Once, as Yangshan was meditating in front of the monks' hall in the middle of night, he didn't see the mountains, rivers, buildings, people, or even his own body -- all was the same as space. The next morning he reported this to Guishan, who said, "I reached this state when I was at Baizhang's -- this is just the achievement of melting illumination which dissolves illusions. Later on, when you are teaching, there can be no one who surpasses this."

"The stage of faith is gradually matured, and one is generally aware of wrong states; although one distinguishes purity and defilement, it is like a sword cutting mud. One still reatains the halter -- one cannot yet rely on faith; therefore (the ox is) half white, half black." -Chan Master Haosheng of Qingju, comment on the 6th ox-herding picture

Guishan once said to Yangshan: "When thoughts are exhausted, you have arrived at the source, where the True Nature is revealed as eternally abiding. In that place there is no difference between affairs and principles and the true Buddha is manifest."

Yangshan said, "In my shop, there is a wide range of goods. If someone comes looking for mouse turds, then I give them some. If someone comes looking for real gold, then I give it to him."
A monk said to him, "I don't want mouse turds. May I have the master's real gold?"
Yangshan said, "You can try to bite the head of a flying arrow until the Year of the Ass but you won't succeed."
The monk couldn't respond to this, so Yangshan added, "If you want to exchange something, we can make a deal. If you don't want to exchange anything, then we can't."

"He's delighting in the road, but ultimately will fail to reach home." -Old Zen saying


To reveal the place where True Nature abides, we have to exhaust our thoughts. We have subjective thoughts (about who we are, who we should be or want to be), and objective thoughts (about the nature of others and of things and our relation the them). These must all be exhausted in order to dwell in theat place where the true person is manifest. Yangshan is saying that you're not a complete person until energy is flowing freely through you. It's "not all right" because it's stuck. If you are looking for your rue self, it is not a thing to be found. Exhaust your thoughts and discard whatever you're holding onto, and your true self will naturally be revealed. The monk remains attached to emptiness. Letting go of attachment to emptiness, one arrives at the stage of a person far beyond discrimination. The body and mind are without attachment; gain and loss are cleared away. As for this absolute state, if you try to discuss it, you fail. Just as the eye cannot directly see the eye, it doesn't fall in the scope of your mental function to see the true person. In order to reveal the emptiness, you have to be the emptiness. In order to reveal the person, you have to be the person.


Yangshan said, “Do you think of that place?” He is talking about the homeland of his own essential mind, his own essence, his essential nature.
The monk said, “I always do.” This monk is only thinking in terms of his geographical homeland. It’s time for Yangshen to throw out a problem to the monk.
“Are there a lot of things there?” There are many “minds.” Like, dislike, happy, sad. Is there a different mind each time? This is Yangshan’s question. There are many things in the outside world, but are there many minds inside?
The monk said, “There, I don't see anything at all.” The monk has simply realized emptiness, where there is not a single thing.
Yangshan said, “That's right for the stage of faith, but not yet for the stage of person.” This is the central focus of this koan. Yasutani says these stages come from the philosophy of Buddhist doctrine. Another book says the stages were creations of Yangshan. Yasutani says that the stage of faith means kensho, the stage of “dying the great death.” He says that the stage of person means coming to great life. Elsewhere, Yasutani said that the stage of faith is the stage somewhere between the stage of “seeing the tracks” and “seeing the ox” in the Ten Oxherding Pictures, in other words, not yet at the stage of kensho, although kensho is not far away. We have a clear intellectual understanding and all doubts are gone. The “stage of person” is the stage of realizing the true fact. As for me, when we speak of the “stage of faith” I feel that true faith is only established once we have realized kensho. Unless you have realized in this way, your faith is still liable to be shaken. The “stage of person” is quite a deep state. You could say it’s a matter of returning to the essential world and clearly realizing your true self and then returning to your original unadorned self. In terms of the Five Ranks of Hen and Shô, it is the level of ken-chû-tô. Having completely realized and even forgotten that realization, you have returned completely to your unadorned ordinary self. Yangshan is saying the monk that he has yet to experience the true inner recesses of Zen. This is known as returning to our home country, returning home and sitting in peace.
“Sitting down, putting on clothes – from now on you see by yourself.” Standing up, sitting down, that’s it! Putting on clothes and taking them off, that’s it! Each tree, every blade of grass, raising a hand, putting down a foot, each of them is the true fact itself. You have realized the world of emptiness and I recognize that. But now you must realize that standing up, sitting down, putting on clothes, taking them off, eating, drinking…they are all just THAT! They are the complete revelation of your true self. Now you must go on to realize that yourself!


Yangshan's "Mind and Environment"
Sticky fingers smudge the windows.
In the stillness,
only blind men see.


One side of the mystery.
How many sides are there? (None. One. Two. More than the square of the number of all the grains of sand in the world.)
From the mountain peak of faith to the village street of person,
Wherever you are, you're needed at the other.