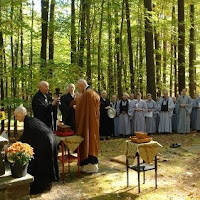 
However hard one may try,
It can never be depicted, it can never be drawn.
Puhua made a somersault*, Longya exposed only half his body.**
After all, what is the appearance of that One?
[*Master Panshan (720-814), shortly before his death, brought in his disciples and told them to depict the Greatest Matter. Puhua (d. 860) made a somersault and went out.
**There is a portrait of Longya (835-920), on which only the half of his body is painted. On the back side of the portrait stand the following verses: “The sun comes out and lines itself with the mountains; the moon is round and shines upon each house. This is not no-body; I do not want to expose all.”]


When Dongshan held a memorial service for Yunyan before his portrait, he told the episode related to the portrait.
Then a monk asked, “When Yunyan said, 'Just this!' what did that mean?”
Dongshan said, “At that time, I almost misunderstood my master's intention.”
The monk said, “I wonder whether or not Yunyan really knew that it is.”
Dongshan said, “If he did not know that it is, how could he say like that? If he knew that it is, how did he dare say like that?”

Background: "The Episode Related to the Portrait"


Dongshan was still a young monk under Yunyan.
One day, when he was leaving his master, he asked Yunyan, “After your passing, if I am asked by someone whether I have your portrait [or: "if I can describe your reality"], what should I answer?”
Yunyan remained silent for a while and then said, “Just this [is it].”
Dongshan sank into thought.
When Dongshan was about to go, Yunyan called to Dongshan, “Dear Liangji [Dongshan’s given name]!”, and said, “If you want to attain this Great Matter, go straight to it and be utmost precise!”
Dongshan left without saying anything more. Later, as he was crossing a river he saw his reflection and then for the first time was thoroughly enlightened. Thereupon he composed a verse.

Dongshan's Verse Upon His Enlightenment


Just don't seek from others, or you'll be far estranged from Self.
I now go on alone; everywhere I meet It:
It now is me; I now am not It.
One must understand in this way to merge with thusness.


How could he speak thus?
How could he be able to say this?
Fifth watch, and a cock crows: dawn in the forest of houses.
In the third watch the cock crows -- Dawn for the forest of homes.
Why did he even speak thus?
How could he be willing to say this?
Thousand-year-old crane and cloud-piercing pine together grow old.
The thousand-year crane grows old with the pine in the clouds.
The jewel mirror lucidly tests Absolute and Relative:
The jewel mirror, clear and bright, shows absolute and relative:
the bejeweled loom, with shuttle flying.
See the unstopped finish.
The jade machine revolves -- see them both show up at once.
The school's style prospers greatly; rules mosey along.
The Way of the school is greatly influential, its regulated steps continuous and fine:
Father and son transforming throughout,
their charisma expanding.
Father and son change and pass through -- oceanic is their fame.


The monk said, “I wonder whether or not Yunyan really knew that it is.” The monk is asking whether Yunyan really knew that “there is essential nature.” To say such a thing already becomes a concept and “dirties” essential nature when you speak in terms of true self or essential nature. But he does not use such names.
Dongshan said, “If he did not know that it is, how could he say like that? If he knew that it is, how did he dare say like that?” In other words, if Yunyan had not realized that world, how could he have said “just this?” It was because he had realized it that he was able to say what he did. The second part means that, if he still knew that it is, (i.e., if he was still clinging to an idea of there being something like satori or being enlightened), how could he have said it like he did? So the world of “just this” means coming to great enlightenment and then completely forgetting, completely wiping away any trace of that enlightenment. It is only then that you can truly say, “just this.” Then there is “thusness” or “suchness.” When you stand there is only standing. When you sit there is only sitting. When you are sad there is only sad, with nothing else sticking to it. Wansong's Preface asks, “After all, what is the appearance of that One?” In this koan, Yunyan represents the appearance of the person who has completely grasped the matter.


Deep in these mountains
is an ancient pond.
Shallow or deep,
its bottom has never been seen.


Dongshan Presents Offerings: Presented to My Teacher from Over a Bridge
The immediate offering of Just This cannot be tolled.
Not grasping outside, who would fail to taste?
Waiting for someone to whom I never need explain,
When the jade workings turn, the apparent is real, and real apparent.
Now I am not you, but how truly you are me.
Just this, Just this--caring for it well;
Though I cross the great water, everywhere I meet you,
Only half agreeing, I work to repay my ancient debt.

Strong fingers
mould your features --
eye sockets formed
by the pressure of thumbs,
a mouth pulled open
for the first deep breath.
Who? . . . Who? You ask.
But the hands have gone.