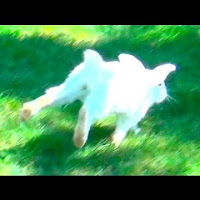 
Even if one sank forever in hell, one would not look for the Liberation of the saints;
Devadatta enjoyed the bliss of the three-Dhyana-Heaven amid uninterrupted hell.
Udraka Ramaputra fell from the zenith of heaven down into the body of a flying raccoon.
Just tell me, where is the gain or loss?


When Dongshan and his spiritual Uncle Mi were walking together, they saw a white rabbit run by in front of them.
Mi said, “How swift!”
Dongshan said, “In what way?”
Mi said, “It is just like a person in white clothes [i.e., a commoner] being venerated as a prime minister.”
Dongshan said, “You are such an elderly and respectable man, and still you say something like that?”
Mi said, “Then how about you?”
Dongshan said, “A noble of an ancient house is temporarily fallen into poverty.”


Dongshan and Master Sengmi of Shanshen were crossing a stream.
Dongshan asked, "How is the event of crossing the stream?"
Sengmi said, "Doesn't wet the feet."
Dongshan said, "A venerable old person like you using such words!?"
Mi said, "How about you?"
Dongshan said, "The feet are not wet."


In the teachings, there are two gates, natural and cultivated. In Dongshan's lineage this is called "using the accomplishment to illustrate the state." Usually we awaken by means of cultivation, entering sagehood from ordinariness -- a commoner is directly appointed prime minister. If you're first enlightened and then cultivate afterwards, you enter ordinariness from sagehood -- traditional nobility is originally honorable. Though drifting destitute in myriad conditions, the basic constitution is still there. That is why it is said, "In the metaphor of the destitute son is illustrated the Path. In the verse on presenting the jewel is shown the net of salvation."


Contending strength with frost and snow.,
Matching strength with snow and frost,
footsteps alike in cloud and heaven:
Walking evenly through clouds and sleet.
Kake left the country; Shojo crossed the bridge.
Xiahui left the country,
Xiangru crossed the bridge.
Shoso's strategy made the Han dynasty prosper.
Xiao and Cao's strategy was able to establish the Han,
Sokyo's body and mind wanted to avoid Gyo.
Chao and Xu wanted to avoid Yao completely.
Favor and disgrace do unsettle.
Have firm faith in yourself.
Favor and disgrace are disturbing -- profoundly trust in yourself:
The genuine spirit -- mingling footprints, mixing with fishermen and woodcutters.
In the real state one mixes tracks with fishermen and woodcutters.


Who can be tuned to that beyond what is and what is not?
Though all persons want to leave the ever-flowing stream,
Each returns to sit among the coals and ashes.


There are two aspects of our practice and realization: the intrinsic and the experiential. Intrinsically, you are Buddha. But have you experienced it? Usually in the Zen tradition, we awaken through our steady practice, through focusing and quieting our mind, allowing our concentration to develop ever more deeply into samadhi. That's called "entering sagehood from ordinariness."
Realization is a place to get stuck. But having such an experience, letting go of it, refining it, and maybe having aditional realizations and letting go of them is called "entering ordinariness from sagehood." It means not holding onto anything.
The mind is quick and zig-zags like a rabbit. It cannot be grasped or controlled. Yet ultimately there's no thing there to control.
To "sit among the coals and ashes" is the compassionate activity of the bodhisattva. There is no separation: everything is one body.
Wherever you try to hold on, right there, it's a problem.


Mi said, “Then how about you?” Dongshan said, “A noble of an ancient house is temporarily fallen into poverty.” In reply to Uncle Mi’s statement, in which he praises the rabbit for “divine powers” far exceeding a rabbit, Dongshan says there is just the rabbit. It’s quite difficult to realize this koan. One way to say it is: I’m fine just as I am. All beings are intrinsically Buddha, and already posses the limitless and absolute from the very beginning. You temporarily fall into poverty, but that impoverished state is perfectly fine. If you stick to the belief that you need money or social status to become peaceful, it’s not the real thing. You have to realize that you are alone honored under heaven, even if you fall and lose everything.


Spiritual Uncle Mi and the Rabbit

Words like frogs singing --
empty them of meaning.
Remember from what you are fallen.
Quick -- is it by error or design,
vow or consequence?
In the small rabbit see the great,
invisible beyond it --
beyond it, no beyond,
no great or small,
no error -- just this.

The original earthquake
separated heaven from earth
Men and gods could no longer
ascend and descend
as had been their pleasure.
In the silence that followed
gibbons swung from trees
at the bottom of a gorge.


Dashing rabbit zips past. So swift!
Rabbit-watching Uncle stands motionless. So swift!
"Wherever you go, there you are" --
And somewhere else, too. So swift!