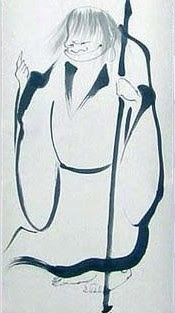 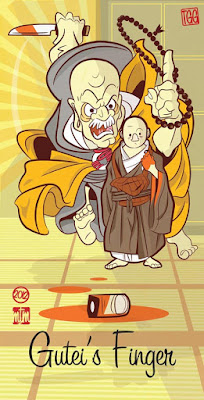 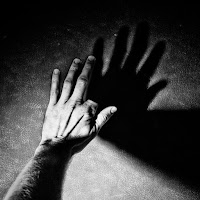 
Whatever he was asked about Zen, Master Jinhua, simply stuck up one finger.
He had a boy attendant whom a visitor asked, "What kind of teaching does your master give?"
The boy held up one finger too.
Hearing of this, Jinhua cut off the boy's finger with a knife.
As the boy ran away screaming with pain, Jinhua called to him. When the boy turned his head, Jinhua stuck up one finger.[1]
The boy was suddenly enlightened.
When Jinhua was about to die, he said to the assembled monks, "I have received this one-finger Zen from Hangzhou. I've used it all my life but have not exhausted it."
Having said this, he entered nirvana.

[1]Some versions add here: "Reflexively the boy responded by attempting to raise his own (cut off) finger." (Koro Kaisan)


The enlightenment of Jinhua and the boy have nothing to do with the tip of a finger. If you realize this, Hangzhou, Jinhua, the boy, and you yourself are all run through with the one skewer.


Old Hangzhou made a fool of Jinhua,
Who cut the boy with a sharp blade.[2]
The mountain deity Juling raised his hand, and lo, without effort,
Great Mount Hua with its many ridges was split in two.[3]


Nothing is known about Master Hangzhou Tianlong except for the following mondo:


A monk asked, "How can I get out of the three worlds?" [i.e., the three delusive worlds, desire, form, and no-form]
Master Hangzhou said, "Where are you right now?"


Jinhua spent some years in solitary practice before being visited by the nun, Jissai, and then, Hangzhou. Jinhua's mistake was in supposing that lots of zazen is enough in itself. It is not. Even a small amount of zazen can be bondage if it is a device for avoiding the world. It is in engagment that we find our true natur -- the true nature of the universe. Some Zen students, who have come from other religious paths, listen for the "inner voice." This can be a great delusion. Lots of people are in prison or in asymums because they made a practice of listening to their inner voice. Jinhua's finger is much more reliable.
Other teachers are well known for their distinctive actions. Luzu [9th gen], a brother of Baizhang and Nanquan in the Dharma, was famous for just turning around and facing the wall when a student came to him for instruction. Bankei Yotaku [1622-1693] is famous for uttering the single word "unborn." But few teachers, it seems, were as singular in their method as Jinhua. But be careful. Don't be casual about that one finger. Not only your own finger, but your life, your vitality, your hopes, your inner riches -- all will be dissipated by superficial imitation. You must express Jinhua's mind clearly. What do you do? What do you say? Hangzhou's finger and then Jinhua's finger reveal the marvelous extent of the world and ourselves. Jinhua's life reveals the importance of accepting the world at the outset of practice. My way cannot be my exclusive way. It is the Dao of the universe or it is vain.


When Zen master Jinhua would raise a finger, he was simply pointing, both symbolically and directly, to the one true reality that is beyond personal conceptions and judgments. Jinhua's finger signals his devotion to the practice of meditation through the use of a spell [dharani]. The original meaning of "spell" in this sense in English is to render stationary, to fix or train on one point. Thus a spell is a concentration formula repeated to focus the mind steadily. In the figure of the boy seemingly punished for imitating master Jinhua is the principle that ignorant imitation, or repetition of superficial forms received at second hand, is not the Way to direct experience of reality. Jinhua was not imitating his own teacher, who did not raise a finger to every question. Jinhua had been blasted to kingdom come by his teacher's spontaneous gesture, and spent the rest of his life just pointing to suchness. Had the boy absorbed the master's message, he would have been able to point to suchness another way. A popular Zen meditation theme says, "All things return to One; where does the One return?" This is the way to work on the koan of Jinhua's finger.


How could it be easy to reply
To the casual conditions of question and answer?
It's hard to be really stylish if you have no money.
There's something in his heart, but he cannot say it;
In his hurry he just holds up a finger.


"Is there a life after death?" Jinhua raises a finger. "Is there a meaning to my life?" Jinhua raises a finger. "Am I all alone in a world that cares nothing for me?" Jinhua raises a finger. Always the same response. Some people say that Jinhua's finger stands for one mind, a symbol for unity. This was the boy's mistake. In Zen one is admonished not to confuse the finger with the moon to which it points. But then, what does the moon point to? Fayen was wasked, "What is the moon?" and he replied, "The finger." He was then asked, "What is the finger?" and he replied, "the moon." Both Jinhua and his attendant in their own way exhausted all the resources of their being. Both were brought to the abyss of their own true nature, and it was only then each could plunge into renewed life by the raising of a finger. Someone observed "If you see into a speck of dust, you see into the whole universe." After the boy's finger was cut off, how would he then reply to a question? it is like working on mu. Before the thought of mu arises, what is mu?


Hakuin asked the meaning of the "the voice of one hand." Bankei advocated "unborn" and "unborn" alone. Jinhua simply raised his finger on every occasion. Each of these demonstrations of the truth was the same; and all were, at the same time, different. Jinhua's was the samadhi of the intuitive first nen; Bankei's the samadhi of the intuitive third nen; Hakuin's a combination of both. True samadhi controls not only momentary attention but also the whole stream of consciousness: that is, the trend of the mind. In samadhi also, each and every moment is independent. Jinhua's samadhi was a demonstration of this. Although he always raised his finger, he never raised the same finger. He was always new.
"Did not exhaust it." One cannot exhaust Dharma treasure. It is never ending.


Although the Chinese government's persecution [under Emperor Wuzong, reigned 840-46] resulted in the worst circumstances for the Buddhist establishment in its history in China, it created the opportunity for good monks and nuns to set out on pilgrimages. Jinhua, too, caught his chance at this time of oppression. He sensed keenly that the opportunity for realization is rare and noble. This was the reason why, in our present story, he cut off the boy's finger. An imitation of the teaching seems at first rather innocent, but if it is not nipped in the bud, it will grow into the ugly weed of religious complacency, or into the troublesome weed of hypocrisy. To open the gate of realization, one must block off one's road of conceptualization. At the moment that Jinhua called for the boy to stop -- and the boy turned his head toward Jinhua, and the master raised his finger -- there! With his road of thinking blocked, the boy could be enlightened. This koan not only teaches you to realize Zen for yourself, but also shows you how to open the minds of others and let them see the truth as clearly as daylight. The power of Zen that Jinhua received from Hangzhou was not merely the act of raising a finger; it was the means to enlighten others.


"What is the essence of Buddhism?" "What is Zhaozhou's 'Mu'?" "Bring out your mind and show it to me." "When your body is all decomposed, where do you go?" Whatever Jinhua was asked, he stuck up one finger. Throughout his life he gave no talks. What a hearty Master he was! The fact was, he could never put it in words even if he wished to do so. Or I might say he expressed it fully. One is all. There is nothing to add. True it may be, but tell me, "What is the finger?" Is there anybody who does not have a finger? Or Truth, or the Buddha Nature, or whatever you may call it? Pitiful indeed are those who are not aware of the foolishness of seeking after water while they are in the midst of it. Yet if you stick to the finger, you are thousands of miles away from the Truth. Jinhua was himself enlightened when Hangzhou held up a finger. What is important here is not the lifted finger, but the intensity of the inner struggle Jinhua went through. In Zen training one has to strive with soul and body to transcend his dualistic discriminating consciousness. One has to come to the ultimate extremity where any slightest touch may effect a great change in his personality, so fundamental as to be described by saying that the "the earth splits and the mountains collapse." If one starts asking what this one finger might mean and tries to find some significance in sticking up the finger, apart from the actual inner struggle Jinhua went through, he is a complete stranger to Zen. If I dare to explain it philosophically, one finger held up here is not a finger any longer; it is Jinhua himself, I-myself, the universe itself -- but if one clings to such an explanation, Zen is no longer there. [RE: cutting off the boy's finger:] That is, he cut off the boy's finger of imitation, which is no better than a corpse. In the extreme pain penetrating the universe, the boy grasped the Truth of One Finger. The boy, losing his finger, attained the true finger and eternal life. This Zen of One Finger is nothing but the Truth pervading the whole universe. The marvelous capability of Jinhua in cutting it off should certainly be admired. Although the physical body of Jinhua, a historical person, did die, his Zen is alive here now, in my finger and your finger, transcending space and time. The whole universe is a finger; a finger is the whole universe. It should then be ever new and alive, and its creative work can never be exhausted; it exists forever together with the universe itself.


In the past, had I witnessed Jinhua sticking up one finger, I should certainly have wrenched it away!


Teachers do this,
Cut off parts of their students --
A finger, a toe, a nose,
A vanity, a limiting story, a jaded detachment --
Whatever: the cut hurts.
There's screaming and blood.
Some teachers offer bandages and prosthetic
Replacements that meet a purpose.
Others don't, but only watch
With silent eyes the dripping wound
To see what the excised part
Had been inhibiting,
Teacher and student alike
Surprised at what emerges,
In wonder of what it might be for.