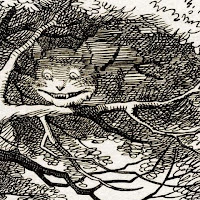 
One speck of a holy hermit's medicine changes iron into gold;
One word at logic's end renders an ordinary person to a sage.
If you learn that gold and iron are not two,
And that ordinary and sage are intrinsically the same,
Then you don't need that “one” after all.
Just tell me, what is that “one” point?

[3] "Whose arising and vanishing is it?" (Cleary); "Who appears and disappears?" (Sato)


Cutting old brambles, smashing the fox cave.
Severing old entangling vines,
Opening up a fox lair
A leopard shrouded in fog has its spots changed.
A leopard covers itself with fog to change its spots
A dragon riding lightning has its bones transformed.
A dragon rides the thunder to change its bones
Tut! Rising and vanishing snarled up. What is it?
Bah!
Arising and vanishing in profusion -- what is it?

["According to a Chinese legend, a leopard hides himself in the deep fog of a southern mountain and fasts for a week, in order to change his spots to become a tiger." (Sato's note)]


Luoshan first asked SHISHUANG Qinzhu (807-88), "When arising and vanishing go on unceasingly, what then?" Shishuang said, "You must be cold ashes, a dead tree, one thought for ten thousand years, box and lid joining, pure and spotlessly clear." [Shishuang's words in this vein are cited in BOS96.]
Luoshan didn't get it, so he went and asked Yantou.
Shishuang set up a 'dead tree hall' -- he demanded that one personally arrive once first. Yantou just esteemed clarity of insight -- as illustrated in BOS75.


Don't be a companion of mind. When mindless, the mind is naturally at rest. If you take mind as a partner, when moving you'll be fooled by mind. Without it, there is no deluded mind. When the Patriarch came from the West, directly pointing to the human mind so they could see its nature and attain buddhahood, was he teaching you to be bandits escorting a thief, to recognize the servant as master?

from the Heroic March Scripture (Wansong)


Ananda said, "The Realized One now is probing the whereabouts of the mind, and I am using the mind to investigate and seek it; therefore that which seeks is what I take to be mind."
The Buddha said, "Tsk! Ananda, this is not your mind."
Ananda, startled, got up from his seat, joined his palms, and said to the Buddha, "If this is not my mind, what should it be called?"
Buddha said, "This is an empty conception of form of sense data before you -- it confuses your real nature. It is due to your having recognized a thief as your son since beginningless time, losing your fundamental constant thus you experience transmigration."


One gang of six thieves, you fool people completely, life after life. Now I know you, and will not be your neighbors. If you don't submit to me, everywhere I go I'llinform people all about you, causing your road to be cut off. If you agree to submit to me, then I won't discriminate; I'll stay together with you, and together witness birthlessness and deathlessness.


Luoshan's question is a model for everyone. Beginners these days time and again make their living in here -- like pushing down a gourd on water, they suppress afflictions. Luoshan's question missed the real and grasped the false. Yantou's scolding merged with the false as the real itself. If it were me, I'd stop after shouting. There is still something beyond real and false. Buddha's shout to Ananda (above) is like the diamond sword; Yantou's shout is like a lion crouching on the ground, the power of the great function of his full majesty, which cannot be fooled. Yantou's saying "Whose arising and vanishing is it?" is the same approach as Yunyan's lifting up the broom and saying "Which moon is this?" [in BOS21]


Much later, a monk asked Luoshan, "When in front of you is a ten-thousand-foot cliff, and behind you are tigers, wolves, and lions, then what?"
Luoshan replied, "Be there!"


Everything arises and vanishes. Watch your thoughts and you see them arise and vanish, arise and vanish.
You would only know the arising and vanishing if you are separate from them. As long as you're siting there and watching the arising and vanishing, then there's a duality. When it is ceaseless, then one thought, instead of arising and vanishing, lasts ten thousand years.
[3] Yantou is saying it's not enough to be one with the absolute. You're not just the absolute. You're everything altogether. When subject and object vanish, who are you? When box and lid perfectly join, there is no discernible seam. When absolute and relative interpenetrate, there is no gap.
Luoshan's sentiment when he later said "Be there!" arose from his realization of the ceaseless arising and vanishing.
To venture into the "enlightened life," you must face your fears without piling more fear on top of them. You must be ready with a steady practice of zazen, able to quiet your mind and not identify with your thoughts as they arise and vanish. Zazen is essential to creating the atmosphere you need to go into the abyss of your fright, loneliness, helplessness, pain, anger.


Thoughts appear and disappear in the mind from morning to evening without ceasing. Everyone has the same problem -- including, evidently, Luoshan. That’s how the human mind is constructed. Whatever thoughts come into your heads, it is not anything negative for practice. Nor is it positive for practice.
[3] Yantou wants to know where such thoughts come from. What is the source of those thoughts? Bassui Tokushu Zenji (1327-87) tells us we must “first of all look into the source from which thoughts flow.” Where do thoughts like “happy,” “sad” or “I’m hungry” come from? They come out of emptiness. The human mind is a strange thing.
We cannot grasp our true self because the thoughts are constantly emerging and acting as an impediment. They may be a bother, but at the same time, we must clearly realize that they are completely empty -- that there is no source from which they emerge. They emerge from nothingness.
In Japan it’s a tradition to tell a weeping child that “the crow that was crying is already smiling.” Our feelings change from moment to moment. The child who was crying a moment ago is now laughing.

(1)
The meditation instruction is clear
Are you there for it or not?
Witness, witness, the enlightenment of the ancestors.

Spring arriving
Forsythia Blooms at the End of the Road
The innocent returning sits at the embankment
Not moving even an inch
Witness, witness! Again and again
Dharma Gates are boundless
Delusion in profusion, swallowing the medicine
What a mess!
Obstruction realized is not obstruction
Celebration
The Forsythia Universe reveals itself freely!
Understanding the root of such a display
Spring arrives
Moment after moment.


Where do thoughts come from?
Follow that thought
for half a lifetime
through pain and loss
until one day
the thought vanishes
and there's no thinker to be found
in the entire universe.


Between urb and sub-
An hour before dawn
A grey monk walks
the empty sidewalk
From her rented room
To the chapel zendo.
She sets out six mats in two rows
Centers a round cushion on each,
And a sutra book.
As the sky begins to lighten, I
On my way to a bagel and coffee,
Look in through a narrow window
See the small grey peak
At the end of a row, alone.
She has always been there
and always will be,
Just as I have stood and will stand
through all past and future
Looking in
One hand on the doorknob.