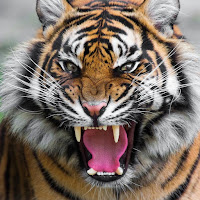 
A monk came to the hermit Tongfeng and asked, "What if you suddenly faced a tiger here?"
The hermit roared like a tiger.
Thereupon the monk pretended to be frightened.
The hermit laughed loudly.
The monk said, "You old robber!"
The hermit said, "What can you do to me?"
The monk said nothing further.
(Xuedou said, "They are certainly right, but these two evil robbers only know how to steal a small bell while they stop their ears.")


A chance, and if you fail to seize it,
You miss by a thousand miles.
The tiger had fine stripes
But no fangs and claws.
Remember the battle on Mount Daxiong:*
Their words and actions shook the earth.
If you have eyes to see, you see
They caught both head and tail of it.