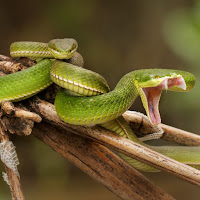 
A monk asked Master Qinglin, “How is it when a student proceeds on the trail?"[2]
Qinglin replied, “The dead snake hits the great road. I advise you not to bump into it.”[3]
The monk said, “When it's bumped into, then what?”[4]
Qinglin answered, “You lose your life!”[5]
The monk continued, “When it's not bumped into, then what?"[6]
And Qinglin said, “There's no place to dodge to.”[7]
The monk said, “At that very moment, then what?”[8]
Qinglin replied, “It has been lost.”[9]
The monk then said, “I wonder where it's gone.”[10]
And Qinglin responded, “The grass is so deep, there's no place to seek.”[11]
The monk replied, “Shield yourself, Osho! Then you'll be all right!"[12]
Finally, Qinglin clapped his hands and exclaimed, “Your poison is equal to mine.”[13]

[2] For "on the trail," Cleary gives "by a short cut"; Sato gives, "along a narrow path?” (Sato).
[3] Or: "A dead snake lies across the great road: I urge you not to step on its head" (Cleary); “You will meet a snake of death [a deadly poisounous snake] on the great road. I advise you, do not run into it” (Sato).
[12] Or: "You too should be on guard, teacher" (Cleary); “You too, Master, must be watchful in order to get it” (Sato).
[13] Cleary and Sato both say "equally poisonous," leaving ambiguous whether the monk's poisonousness is being found equal to the snake's or to Qinglin's.


The ferryman in darkness turns the rudder.
The boatman turns the ruder in the dark,
The lone boat at night turns its bow.
The lone boat turns its bow in the night.
The snow of both banks' reed flowers intermingle.
Reed flowers -- 'snow' on both banks;
Smoky waters veil the autumn of one river.
Hazy water -- autumn on one river.
Wind power helping the sail; going without poling.
The power of the wind helps the sailboat go without rowing.
Flute notes calling the moon; sailing down to Paradise.
The voice of the flute calls the moon down to the land of spring.


When Chan Master Qinglin Shiqian, third generation abbot at Dongshan, first came from Jiashan to call on Dongshan Wuben, Wuben asked, "Where do you come from?"
"Qinglin said, "Wuling."
Wuben said, "How does the way of teaching in Wuling compare to here?"
Qinglin said, "In other lands bamboo sprouts in winter."
Wuben said, "Cook fragrant rice in a special pot to offer to this man."
Qinglin then went out.
Wuben said, "Later on this fellow will trample everyone on earth to death."


When Qinglin was at Dongshan Mountain planting pines, there was an old man Liu who asked for a verse from the master. Master Qinglin said:

The old man showed it to Wuben, who said, "I appreciate your joy, old man; this person will be the third generation at Dongshan."


Qinglin once said, "You people should investigate apart from mind, intellect, and cognition. Go beyond the roads of ordinary and holy to learn. Only then can you be in command. Otherwise, you are not one of my disciples."


[2] This monk in the hall of great compassion wants to go to the central capital. He even boasts of his knowledge of the direct essential road. What he doesn't realize is that 'directly' is already too roundabout.
[4] Qinglin stopped him with a dead snake on the great road. The monk didn't fear danger or death and said, "When one steps on its head, then what?" He's already poisoned.
[5] Some ask why Qinglin didn't enforce the order with shout and cane, but did Qinglin every let him go?
[6] This monk had some sense of pain. Now he's looking for a way out.
[7] Even Qinglin himself can't avoid it.
[9] The method of reviving people -- at this point you see he can send away, he can summon; there is the ability to capture and to release. If applied to your body, there's no way to rasp hold; taken away for you, then there's a resting place.
[12] Qinglin used a dead snake to roust out this monk; in the end, after all, it's stuck around his waist, wrapped around his legs.
[13] I say, the poison permeates heaven and earth.


Quinglin's mainspring was swift and sharp; this is not the light of only one time, it is also a standard for vast ages.


The long river clear to the depths reflects the moonlit flowers;
The clear light filling the eyes is not yet home.
I ask where the fishing boat has gone;
Deep in the night, as of old it rests in the reed flowers.


[2] By saying that, it's already the long way around. It's not a shortcut. He's creating separation.
[3] Already, you're creating some kind of a problem. You're turning away from that black jewel at your feet and looking toward that sky that's filled with anxiety. You're creating something where nothing exists.
[5] The dead snake is your True Nature. Bump into it and you become alive. What then?
[6] What makes you think it depends on you? What kind of you is it that can bump or not bump?
[7] You can't jump out of its way; you bump into it everywhere. Right now, right here, you're bumping into it -- although, on the other hand, since there is no separation, you're actually not bumping into it. Nonetheless, there is no way to avoid it.
[9] You bumped into it, but now you've lost it by fiddling with it. Though it's a dead snake, if you handle it, it's suddenly alive.
[11] Above Heaven and below Earth, above Earth and below Heaven, it's boundless. It is so vast that there's no outside and no inside.
[12] This monk wasn't afraid of bumping into anything!
[13] Qinglin's remark is like the Zen phrase, "I thought I'd stolen everything from you, but you've stolen everything from me. Qinglin is acknowledging that this monk is pretty sharp.
Dogen said, "A fool sees himself as another, but a wise person sees others as himself. You are not it. It actually is you." Which is the image and which is the form? Wherever you turn, you bump into it. Yet you are not it. When it is not bumped into, it actually is you. As soon as you think you've grabbed onto it, it's gone somewhere else. Or it bites you.


[2] In olden times, Zen masters lived in the mountains and you had to travel over narrow mountain paths to reach them. The monk is going to the Zen master to meet him for the first time. The monk challenges the master with his question of “coming” along a narrow path, as if asking whether the master has anything to warn him about. “How will you treat me?” he seems to ask.
[3] “There’s a fearful poisonous snake lying in ambush on the road. Be careful not to run into it!” The deadly snake is Qinglin himself. Be careful you don’t bump into him! It is a “deadly snake” in the sense that you lose your life if you meet up with it. Later in the koan he is referring to it in the sense of the essential world. He quickly changes his tack according to the monk’s words.
[4] This monk is quite a fellow!
[5] It is here that Seirin moves quite naturally to talking in terms of the essential self -- a matter of losing your life in the sense of body and mind disappearing.
[6] This snake fills the entire universe. This is expressing the essential world.
[7] You are right in the middle of it at all times and can never escape it.
[8] That means, “precisely when it is just now, just this, how about then?” Precisely when you neither try to avoid it nor try to bump into it, what then?
[9] This is an interesting point in this koan. The snake has disappeared without a trace.
[11] The “grass” is our concepts. It means that concepts and thoughts well up like clouds so that the snake gets away without a trace. But actually the thoughts themselves are the snake. The snake has changed into concepts and thoughts and can no longer be seen. In the last analysis what are those concepts and thoughts? They are no other than you yourself. They are the complete manifestation of the snake. The snake has turned into concepts and thoughts. You might think that there is something outside of your thoughts, thinking this and that. But that is not so. It is only one. Another way of expressing it is to say that the snake has changed into grass. So if you try looking for the snake outside the grass, you will never find it.
[12] You, too, must watch out that your are not swallowed by that poisonous snake! This is no run-of-the-mill monk.
[13] Qinglin was very happy and clapped his hands in delight. “This fellow really knows what I’m talking about!” “I’m quite a poisonous snake, but so are you!” They are completely in harmony with each other in terms of Zen understanding. There is the expression “guest and host mutually exchanging” in the sense of freely switching between the role of guest and host. A true Zen exchange of mondo is like this, with the protagonists freely exchanging roles, sometimes on top and sometimes on the bottom, like two master swordsmen in combat. Here’s a case of matched skill and ability.

Facing each other over the ancient divide,
Mutual inquiry softens the danger.
But the wise teacher, adorned like a bride
in spring's blossoms, powered by spring,
Welcomes the stranger with playful phrases.

These two are one
Their lives, too short,
Their job soon done.


When there is no escape,
When all is irretrievably lost,
The deep grasses of exile
Are your ancestral home.

Beside a dirt road
in Cambodia
the water bubbles with
decomposing bodies.
Only the living remain
haunted and restless.
The wair for thunder to roll
over the silent rice fields.