Raven 44: The Good of Practice 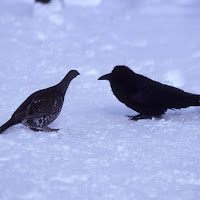 Sometimes the regulars at any religious, faith, or spiritual practice group -- or the trained leaders -- don't seem to be any nicer, wiser, or more compassionate than the general population. Sometimes the regulars act out and act divisively, as though the congregation's function were to be the screen on which they can project all their stuff until they've worked it all through. Sometimes even the priests/ministers/teachers do this. Do these projectors make any progress toward getting it all worked through? Maybe. Maybe not. How about you? Have you already arrived at the wisest most compassionate version of yourself? If not, does progress that direction seem to be happening? Keep at it and see.


The thing, missed --
A tree, a ritual, a song, a shot at love --
Leaves a vacuum
Which the question
Of its good
Fills, or partly.

Posted by Meredith Garmon at 09:25