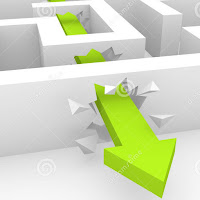 
The myriad Buddhas have never come into the world;
There is no Dharma to be given to the people.
The patriarch has never come from the West;
There has never been a transmission of Mind.
As a matter of course, the people of this time do not understand;
They continue to run toward the outside looking for it.
They do not know that the single great matter lying beneath their feet
Has never been found by the thousand sages.
Now, at this moment, how does it happen that
while seeing, you do not see?
hearing, you do not hear?
speaking, you do not speak?
and knowing, you do not know?
Where do they come from?
If you have not yet understood this, study it in an old koan.
See the following.


Zen traveler Liang asked Qinshan, "What about when one arrow pierces the three barriers?"
Qinshan said, "Bring out the master of the barriers and let me see him."
Liang said, "If that is the case, recognizing my fault, I will withdraw."
Qinshan said, "How long will you keep me waiting?"
Liang said, "A good arrow! But it has achieved nothing." And he was about to leave.
Qinshan said, "Wait a bit. Just come here."
Liang turned his head.
Qinshan took hold of him and said, "Leaving aside for a moment the arrow that breaks through the three barriers -- just shoot an arrow at me!"
Liang hesitated.
Qinshan gave him seven blows and said, "I should let you go on puzzling over this for thirty years."


I'd take out the master of the barriers for you!
I bring out the master of the barriers for you;
Be mindful, you who loose the arrow.
Those who would shoot should not be careless.
If you stick to the eyes, the ears are deafened;
Take an eye and the ears will go deaf;
If you discard the ears, the eyes are blinded.
Reject an ear and the eyes go blind.
How I like the arrow piercing the barriers;
Admirable, one arrow breaking through three barriers --
The arrow's path is clearly seen!
Right on target, distinctly clear, the trail of the arrow.
Don't you recall, Xuansha once said,
Don't you see?
Xuansha had a saying:
The person of might is master of the mind, prior to heaven.
"The great adept is the primal ancestor of mind."