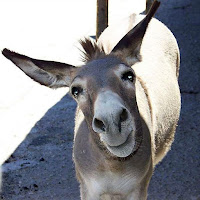 
All those who have intelligence can understand through metaphors.
If you reach a point where no comparisons or analogies work,
How do you explain [the matter] to other people?


Caoshan asked Elder De, “'The true Dharma-body of Buddha is like the empty sky.[1]
It manifests its form corresponding to things – just like the moon on the water'[2] .
How do you explain the principle of this corresponding?”[3]
De said, “It is like a donkey looking into a well.”[4]
Caoshan said, “You put it in a nice way, but you were able to say only eighty percent.”[5]
De said, “How about you, Master?”[6]
Caoshan said, “It is like a well looking at a donkey.”[7]


[1] Officially not even a needle is admitted.
[2] Privately, even a horse and carriage are let through.
[3] I'd fold my hands, approach, and say 'Yes'.
[4] The falling flowers consciously go along with the flowing stream.
[5] If you want to see a thousand miles further . . .
[6] . . . Climb a tier higher.
[7] The flowing stream mindlessly carries the fallen flowers along.


Donkey sees the well; well sees the donkey.
The ass looks at the well,
The well looks at the ass.
Wisdom contains without exception,
Wisdom is all-embracing,
purity permeates more than enough.
Purity pervades, with abundance.
Behind the elbow, who discerns the sign?
Behind the elbow who discerns the seal?
Within the house, no books are kept.
In the house no books are kept.
Loom threads don't hang, a matter of the shuttle.
The loom threads aren't strung -- the work of the shuttle:
Patterns emerge every which way.
The intent differentiates of itself.
The pattern going vertically and horizontally, the meaning is distinct of itself.


Producing understanding from hearing,
You color it in your intellect;
Although right before your eyes is fine,
Kept for a long time it becomes a sickness.
The blue mountain and the white clouds never reach each other.
The loom thread aren't strung --
The work of the shuttle: the pattern going vertically and horizontally,
The meaning is distinct of itself.
The knowledge of the wise is far from the road of good omen --
The lucky grass is rootless; the sages don't esteem it.


And if you gaze long into an abyss, the abyss also gazes into you.


To perceive the aura of an object we look at means to invest it with the ability to look at us in return.


Manifesting according to circumstances, without falling into thought, he therefore put a needle into the bowl of water.


[4] How can this be reached by intellectual judgments? Unless you have gone through long refinement an have the grip of a patchrobed monk, you can't reach this realm; someone of lesser ability, without the key of transcendence, would fully approve of this, but Caoshan partly approves.
[5] It's like he weighed in and measured it.
[6] This one challenge is the limit of words, the end of reason: one would dare say that Caoshan wouldn't be able to go beyond this.
[7] Caoshan gently just turned it around. This could be called 'developing it in kind.' The embellishment is naturally complete without falling into thought. This is why he was called a source of the stream of the Cao-Dong school. But tell me, with what meditation can one get to be like this? Just this, with no grip, nothing can be done about.


[1] In other words, your true self is vast and boundless, conforming to things and manifesting shapes like moon in water. If you totally realize yourself like the vast, empty sky, you see that you manifest according to circumstances -- but the truth is, whether you realize it or not, that's what's happening.
[4] We can also view De's comment as an expression of a state of meditative accomplishment. The original mind is like a mirror reflecting whatever comes in front of it, without putting up filters, without putting up projections or ideas.
[7] But De is still holding onto something. Even the donkey is extra. Caoshan pulls that away.
With all pulled away, you are not tossed around by the phenomena of life, but freely use them according to circumstances. The donkey does not hinder the well and the well does not hinder the donkey. The donkey is the donkey and the well is the well. Yet, the myriad flowers bloom where the partridge calls (Dongshan). When you realize, "the donkey sees the well" there is nothing to know. When you realize, "the well sees the donkey" there is no one who knows. When there is no subject and no object, your body is "like the vast sky conforming to things and manifestiong shapes like the moon in the water" -- but that is only eighty percent of it.


This koan transcends and exhausts all concepts. It wants to bring the true fact home to you somehow, taking all sorts of pains and making all sorts of efforts to achieve that.
[2] Caoshan's quote compares our essential nature to the moon reflected on the water. Just as the moon is reflected in the water, my dharma body appears in response to form. But when you say it like that, it becomes two: the moon and the water. Actually, however, the true fact is one. “True self” has a subjective ring, and “true fact” has an objective ring, but they are one and the same. In order for it to be one, the content has to be empty. From the phenomenal standpoint I have two hands, a left and a right hand. But from the standpoint of my life, those two hands live the same single life. Master Jinhua, whatever he was asked about Buddhism, would always stick up a finger (BCR19/BOS84 and GG3). This completely exhausts the entire universe. It is not that the finger somehow “expresses” the true dharma body of the Buddha. That finger itself is the true dharma body. Just as the moon is reflected in any water body—even the smallest puddle—so each thing manifests the true dharma body of
the Buddha.
[4] A donkey lacks human powers of understanding or judgment. When it chances to look into the well, that no doubt makes an impression. But the well has no life. You look and there it is. That’s the true dharma body of the Buddha. That’s how it manifests its form corresponding to things, De says. To be able to give such a reply is quite a feat.
[5] Zen masters never give a perfect score.
[7] This is a truly wonderful reply. Yasutani Roshi says, “it is like the echo when you call out in the mountains.” There is just seeing, with no seeing subject and no seen object. With Caoshan there is neither the one seeing nor the one seen. There is neither subject nor object. I myself, in response to Caoshan would like to say, “You were able to say only eighty percent.” I wonder what he would then say in reply.

Along
facing/faced with — the stations: the lessons — “What’s the rest of it?” —
“To perceive the aura of an object we look at means to invest it with the ability to look at us in return" (Benjamin) —
inched,
sitting, the length of the viewing platform: showing the garden
each ‘aspect'

The donkey looks at the well.
A bank of nasturtiums.
The well looks at the donkey.
A field of violets.
It's midsummer
and by the slowly moving river
blackberries are ripening
lobe by lobe.


And if you gaze long into an abyss, the abyss also gazes into you.” -Nietzsche

That the abyss would gaze back,
And plumb the measure of me,
Is half of why I looked.

What I see as we peer into each other
Depends on what the abyss sees.

Friend,
The party is not to be peeked at from concealment.
The festivities can only be viewed from amid --
Seeing by being seen; being seen by seeing.

Posted by Meredith Garmon at 12:42