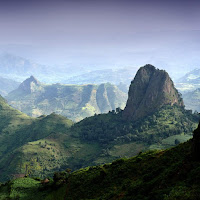 "Mind is no other than mountains and rivers and the great, wide Earth, the sun and the moon and the stars." (Eihei Dogen)

Dogen (1200-1253) was a contemporary of Thomas Aquinas (1225-1274). They each wrote voluminously -- more words than you would think it possible for a human hand to write with a quill before dying at about age 50. Aquinas became the most influential theologian in Catholic thought, and Dogen is a similar giant of Zen thought.

In 1953, Yamada Koun, then age 46, was on a crowded train in Japan reading a Zen book. He came across the Dogen line I've quoted. Yamada's description of the experience was later published in Three Pillars of Zen, (Philip Kapleau, editor): "I had read this before, but this time it impressed itself upon me so vividly that I was startled." He broke into tears with the realization that after eight years of zazen he had finally grasped what this statement meant.

So: what does it mean?


Dogen didn't, couldn't, say
His cranial pitcher held
100 billion neurons, more or less,
Sending neurotransmitter signals
to each other across
100 trillion synapses, more or less.
Still he said mind is not just this.
You are more than that.

Dogen spoke of the senses,
Could say a few things
about light and eyes
and sound and ears,
Yet nothing of the optic nerve's
or inner ear's workings,
Little of nerve endings,
and less of ceptions proprio-,
mechanore-, equilibrio-, thermo-, noci-, and intero-.
Add the flow through the senses
to the skullbound glop --
Still he said mind is not just this either.
You are more than that.

Dogen didn't, couldn't, say
Light bounced off the mountain
at 186,000 miles per second,
Still he told us
mind includes seeing,
includes light,
includes the mountain seen,
includes everything that made the mountain.
This signals-triggering-signals
Has nowhere to stop
Is to nowhere confined.

When all reality pours, as it does, into
Every rock, tree, skullbone
And pours unceasing back out again
Mind is nowhere to be found
Unless it is the whole shebang
Like beans.
Like tears on a train.


Indeed!
The MIND is Heaven,
Earth and
Human Beans.
I count myself amongst those beautiful Beans.
You and I are Raven the Bean Counter 2. Step up. Have a seat.
And eat your fill of all the
Tender Beans.

Posted by Meredith Garmon at 12:52