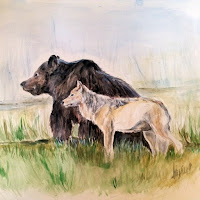 Every tradition has some variations within it which become subjects for argument. In Japanese Buddhism there's dispute over whether bushes and grasses have Buddha-nature and are on the path to nirvana. I don't see what the fuss is about.


Gray Wolf attended meetings sporadically, and when she came she usually sat silent during the question period. However, she came to hear Brown Bear and spoke up, saying, "We dedicate our sutras to the enlightenment of bushes and grasses. This doesn't seem so likely somehow."
Brown Bear chuckled and said, "They are very patient."


Displayed everywhere.
A frozen pond, a car horn.
Buzzing flies, mountains in the distance.
The grass's breakneck absorption of soil nutrients,
Its headlong photosynthesizing.
A customer's raised volume and pitch to a clerk
Saying "slow" and "unacceptable."
The universe's patience
Is displayed everywhere.