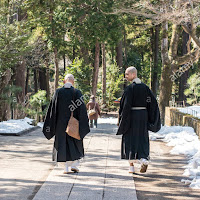 
Jade is tested by fire, gold by a stone, a sword by a hair, water by a staff.
In Zen training the degree of one's attainment and one's progressis known by one's words and phrases, one's attitude and actions, one's coming and going, one's asking and responding.
Tell me, how will it be done?
See the following.


Once Baofu and Changqing went out on a picnic in the hills.
Baofu, pointing with a finger, said, "Right here is Myohocho [the summit of the Mystic Peak, or the Peak of Wonder].
Changqing said, "Exactly. But, it's regrettable."
(Xuedou commented saying, "What's the use of making an excursion with these fellows today?"
He also said, "Hundreds and thousands of years from now, I don't say that there will be none like him, only that there will be very few.")
Later, they reported to Jingqing about it. Jingqing said, "If it weren't for Changqing's remark, the field would have been littered with skulls."


This is Myohocho! Now weeds grow rampant.
On the solitary summit of the mystic peak, the weeds are wild.
You see it clearly, but to whom could you impart it?
Clearly it is brought up, to be imparted to whom?
If you, O Changqing, didn't discriminate,
If not for Changquing's discerning the real point,
May would never know, and their skulls would litter the field.
Skulls would litter the ground, but how many would know?